If you read my post from last years’ Dash & Dawdle, you’ll know what a supremely talented athlete I am. I run at such an elite level that I am surprised the Australian Olympic Committee didn’t send me a personal invitation to Rio. I can only assume it was lost in the mail.

Sorry. Winning the 6km Dawdle last year may have gone to my head a little bit. The fame and fortune that came with the event was obviously too much for me to handle. After all, you only get one win like that in your lifetime.

But the truth is I won last year due to a teeny, tiny bit of fitness, a teeny, tiny bit of trail-running skill and a whole truck-load of luck. I didn’t win this year. There was another lady in the race who appeared to actually be a genuinely fast runner (unlike me, the fraud). She was in front of me from the start. I thought I might catch her on the downhills but she just kept gaining distance. I came second. Or as Mr Ironman likes to call it, first loser. Full of encouragement that one…

The morning started off super foggy and chilly but quickly turned into a beautiful clear sunny day. Great running conditions! The runs started on the road rather than the showground itself as the field had turned into a bit of a quagmire after the last few days of rain.

This year there were a few additions to the race line-up. There were events for the kids and events for those dog-lovers who like to run with their best friends. There was also some off-course entertainment for those kiddies not up for the running challenge, with a jumping castle and face painting. There was a coffee van and the usual post-run sausage or bacon & egg sandwiches.

The races got underway with the Half Marathon going first. Unlike last year, the 12km and 6km races left separately, which means you knew exactly who you would be running with. I will admit I had a little look around at my 6km competitors. I was not taking the event particularly seriously and had only run once in the last 4 weeks so I did not have high hopes for a win this year. Even so I couldn’t help but wonder if I could get lucky again. Looking around, I thought that Miss Fluoro-Yellow stood out as the one to watch. She just had that fit, fast look about her. You know the one? As it happened, she was indeed the one who took first place so even if I didn’t win, at least I can pick a winner (maybe I should quit running for horse racing…).

Scotty, who won the half marathon last year was back. He took out the title again this year. It must have been the lure of the awesome dunny trophy that pushed him. Congratulations Scotty! Enjoy your dunny for another year.

I am really fond of this event. Not just because it made me a champion, but because it is such a lovely, friendly, fun event. So here are some of the reasons I love it so much:

Why the Dungog Dash & Dawdle rocks:

The run wouldn’t be the same without Daisy the mascot cow. The ever-present, ever-smiling bovine is always there to encourage and entertain. I note Daisy has changed her suit from last year. Or did she just have a wash? Either way she was looking very schmick! 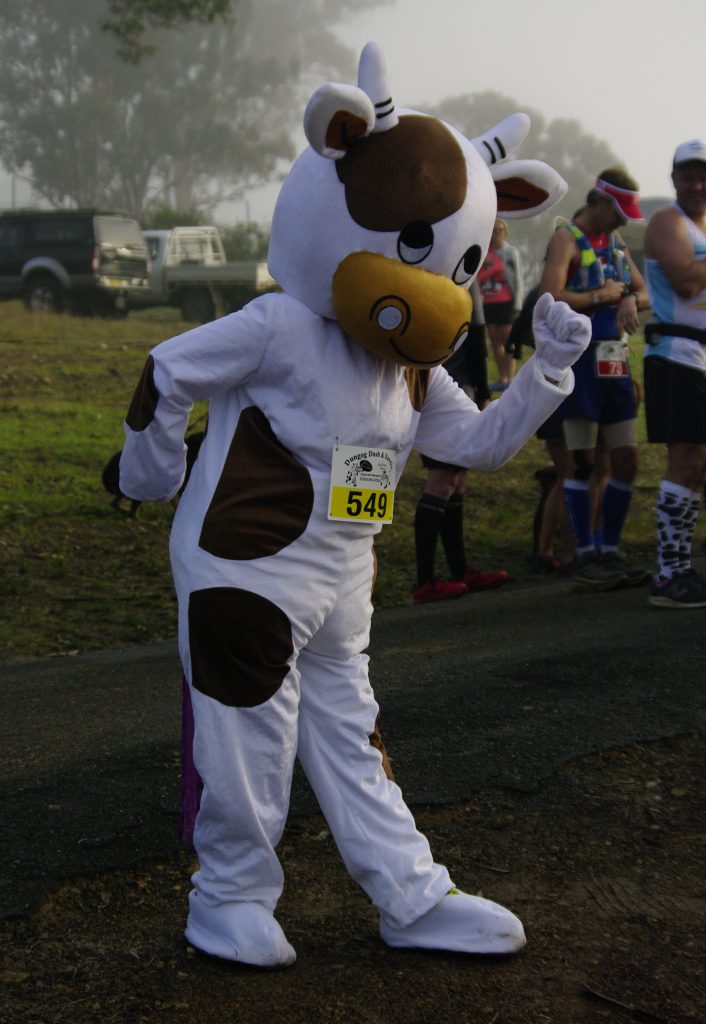 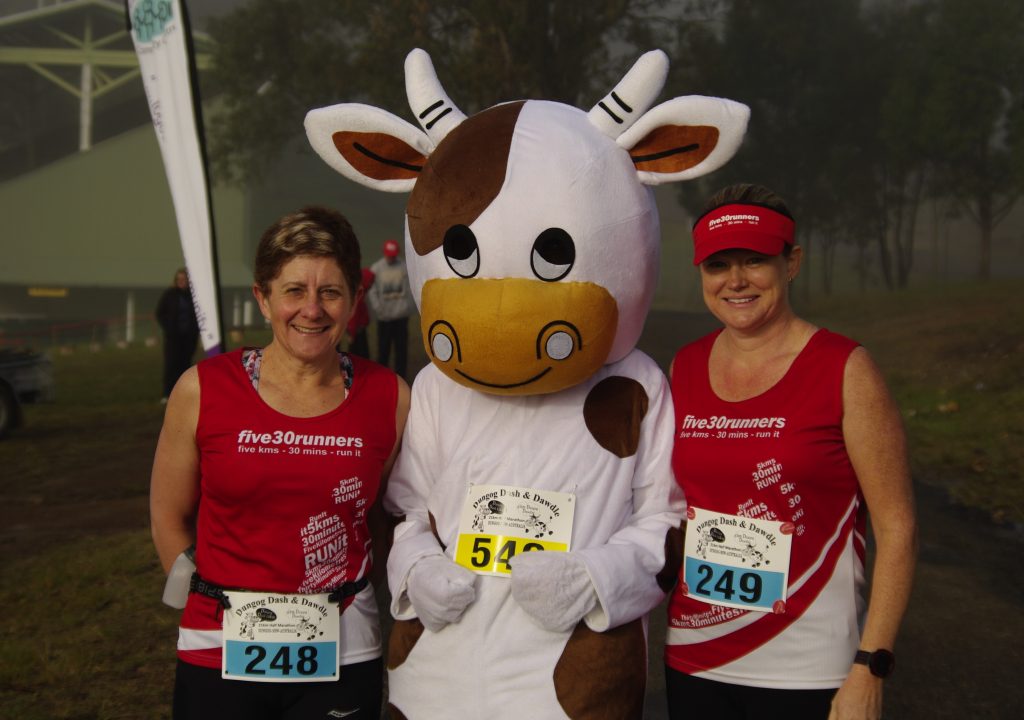 One of the reasons that I may actually decide to do one of the longer events is to see more of the scenery. There are some magnificent vistas up there in the Common, especially on such a clear day.

Or. I’ll just keep doing the 6km each year and then admire the photos taken by my more hardcore friends.

The previous week had seen quite a bit of rain so there was extra mud on course. Who doesn’t love a bit of mud? It makes a run feel so much more adventurous.

It’s not a Dungog Dash & Dawdle without a heavy supply of cow pats. Doesn’t it take you back to childhood when you jump on a big pile of cow poo and it squishes up all around your shoes (or your toes if you’re bare foot)? There’s something so satisfying about it!

One of the new things about this years’ event was the involvement of Tail Runner, a local company specialising in gear for running with your best dog-mate. Their involvement meant extra events were added to the schedule, for people who wanted to run with their dogs, including the Tail Runner Dogathon!

I don’t have a dog so unfortunately have not much use for most of the gear Tail Runner sells. But I did buy myself a set of Tail Runner bib clips. No more holes in my favourite running shirts! Yay! 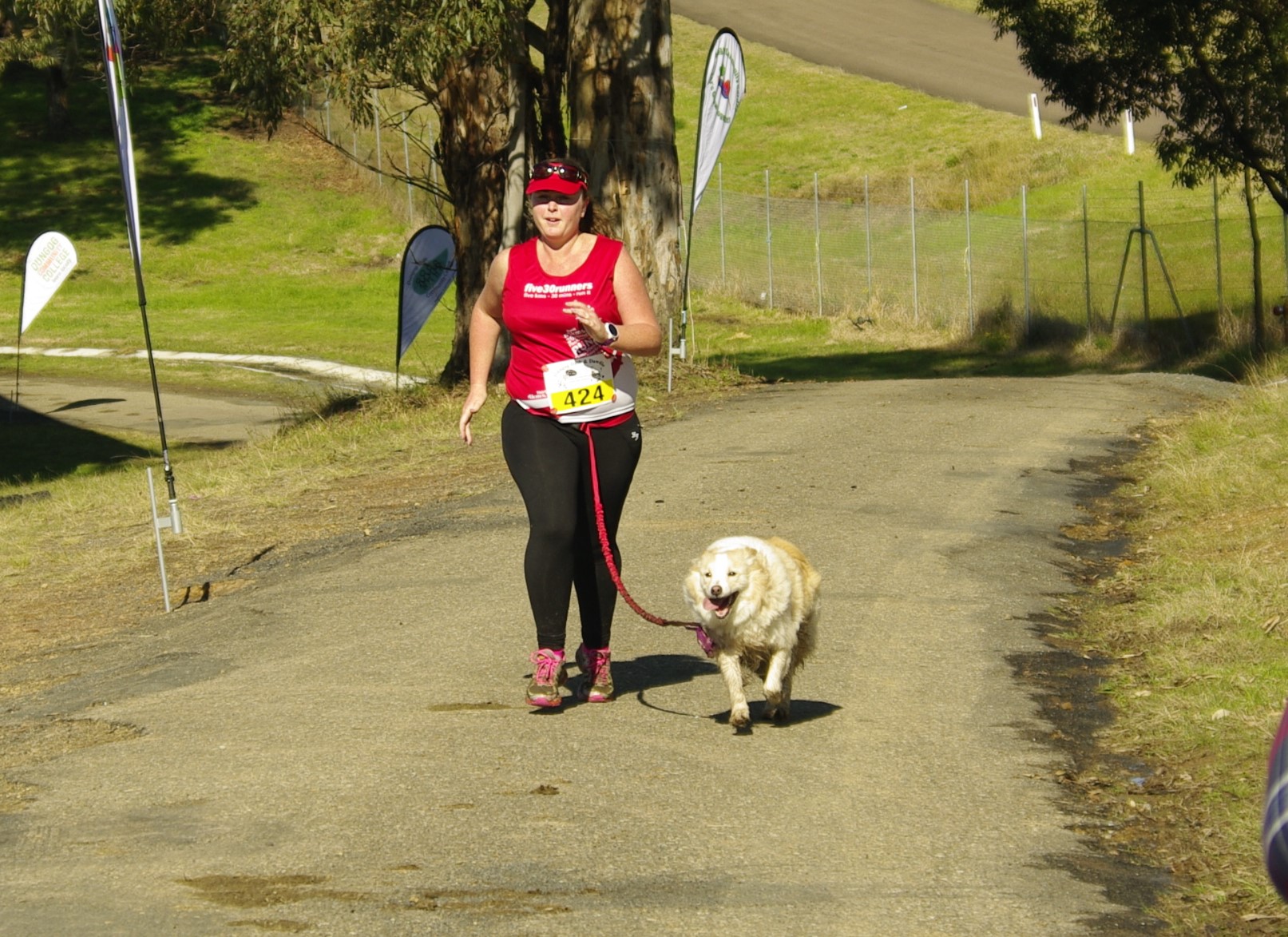 Also present were the wonderful people from Herd2Homes, a not-for-profit organisation that focuses on rescuing and rehoming working breed dogs. There were plenty of beautiful looking canines there who were all up for adoption. I was very impressed at how calm and gentle they were. And being working breed dogs they love to run!

Which other run gives you the opportunity to get a photo like this?

In a fortuitous ending to the day, all four passengers of the car I was travelling in ended up with placings in their events. How does this happen? Seems a bit of a coincidence. Did someone bribe Daisy with some fresh grass? Was there some foul play? Ankle-tapping perhaps? Cow-pat throwing?

But no, after much investigation I have determined that the “foul play” was slightly more subtle. It is likely that a substance known as PEG was released in the car on the way to Dungog that morning. Performance Enhancing Gas, that is, and I can only assume that Mr Ironman was behind the gaseous expulsion. He is a certified coach after all, he must have some tricks up his sleeves to get people running faster.

Foul play indeed. If anyone would like a lift to the next event, let me know…

Thanks to the Dungog Shire Community Centre for putting on such a great little event. I’ll be back next year with bells on. And smelling like PEG…

The Dungog Dash & Dawdle is held every year at the start of August. Keep and eye on the facebook page for details.

crosscountrydungogdungogcommondungogdash&dawdledungogdashanddawdletrailrunning
Scott Base, Antarctica – A Haven on the Ice
10 tips for using the toilet in Antarctica