Izintaba – 5 reasons why it is the perfect African getaway

It’s really hard to be stealthy when there is a thick carpet of dry, crunchy leaves under your feet. No matter how softly I placed my foot down, in the quiet of early morning it sounded incredibly loud. A bit like when somebody is trying to open their choc top wrapper at the movies during a really quiet bit. The only other sound on this morning came from the creature I was stalking, who was tucking into its breakfast. Keeping my eyes on the patch of orange and brown skin just visible amongst the trees, I crept closer.

Suddenly a very long neck swung up and big eyes looked in my direction. I froze, camera halfway to my face. But it was too late, it has spotted me. Busted! Given that it was more than twice my height I would expect it to be unconcerned by my presence, so I was a little surprised when the reaction to seeing me turned from shock to panic and resulted in the creature and its buddies ditching breakfast and making for the hills.

But it was actually a fair bit more dramatic than that. It was a bloody giraffe stampede!!

If you have ever experienced half a dozen animals – each weighing over a tonne – galloping headlong through the bush, you’ll know it makes quite a racket. With the ground shaking beneath my feet, all I could do was stand there wide-eyed as hooves thundered and branches snapped.

Did I do that?? Whoopsie!

Fortunately, as I was the scary thing that had startled them in the first place, their gangly sprint took them in the opposite direction. I do hope there was no unsuspecting animal (or human!) in their path.

I felt slightly guilty to have caused such a ruckus and glanced around sheepishly to check nobody had witnessed it. I thought I’d gotten away with it. But it turns out that the owners of the park live in a cottage that was very close by. The galloping giants had woken them up from their Sunday morning sleep-in and they had wondered what on earth had scared them so. 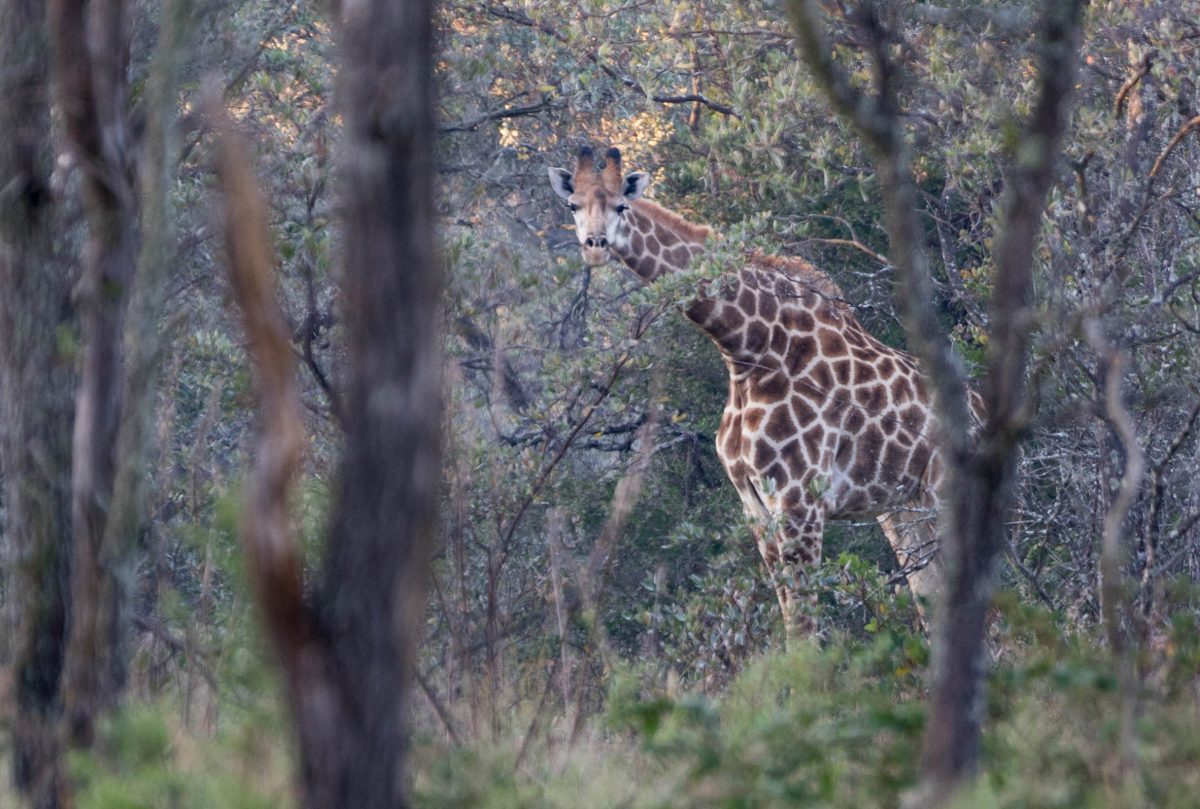 This was Izintaba, a private game reserve in northern South Africa and I was here with Mr. Ironman and my in-laws (who are South African). This was our second time to Izintaba and I was excited to be back. It had proven to be the perfect place for our family getaway. Here’s why:

Izintaba is in the Bushveld, which is a sub-tropical woodland eco-region of Southern Africa. It’s predominantly grasslands dotted with clumps of trees and tall shrubs. It is surprisingly gorgeous, especially in the morning and evening when the low sun filters through the trees. It also has some beautiful exposed rock (yes, beautiful rock. Trust me).

I also loved the peace and serenity of the park. Apart from the occasional grunt of a wildebeest, howl of a jackal or of course a giraffe stampede, it was incredibly quiet. 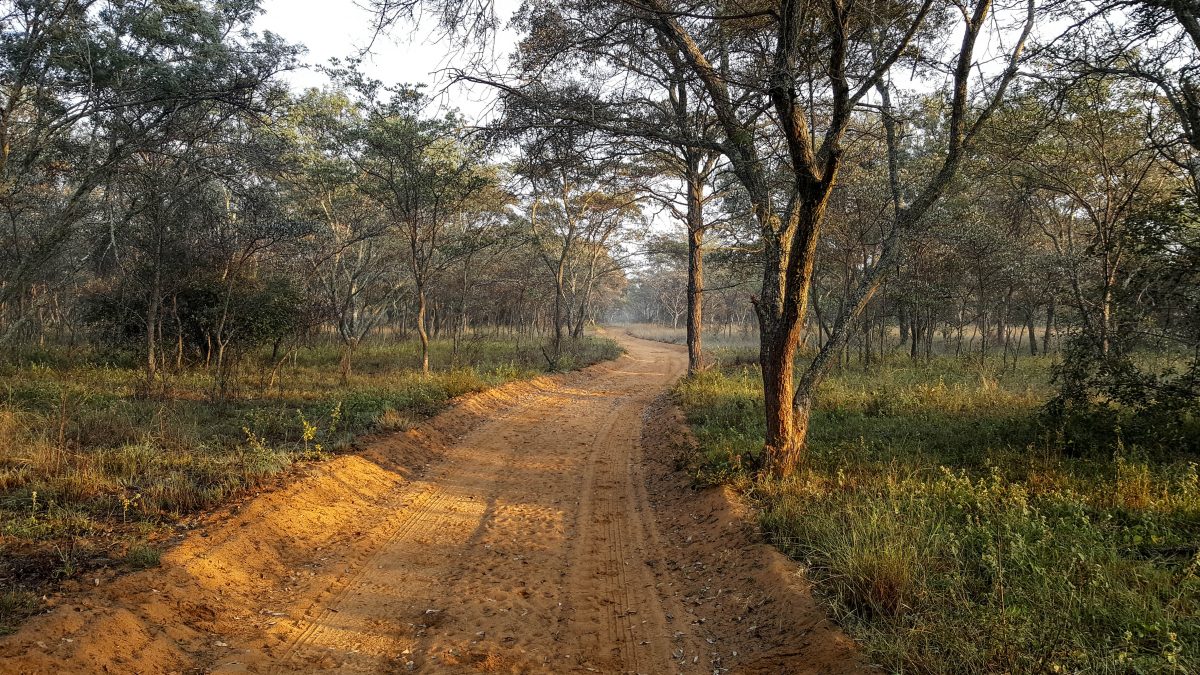 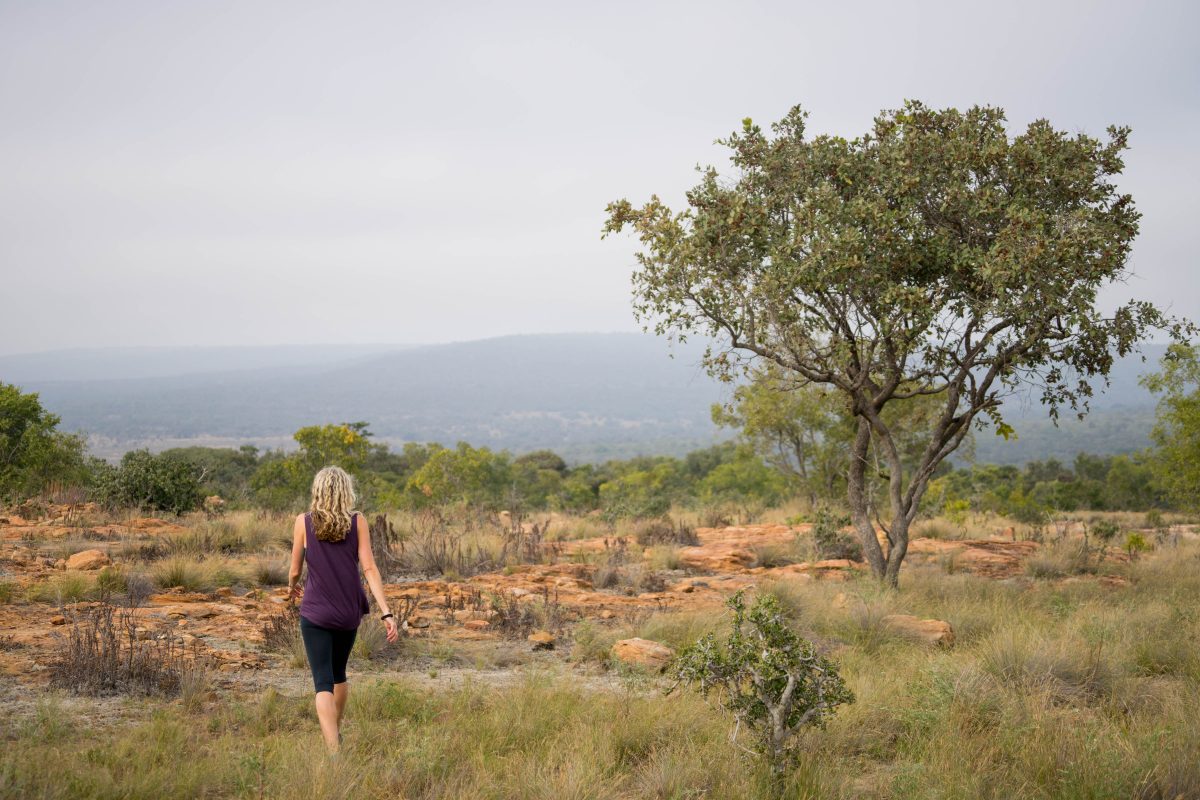 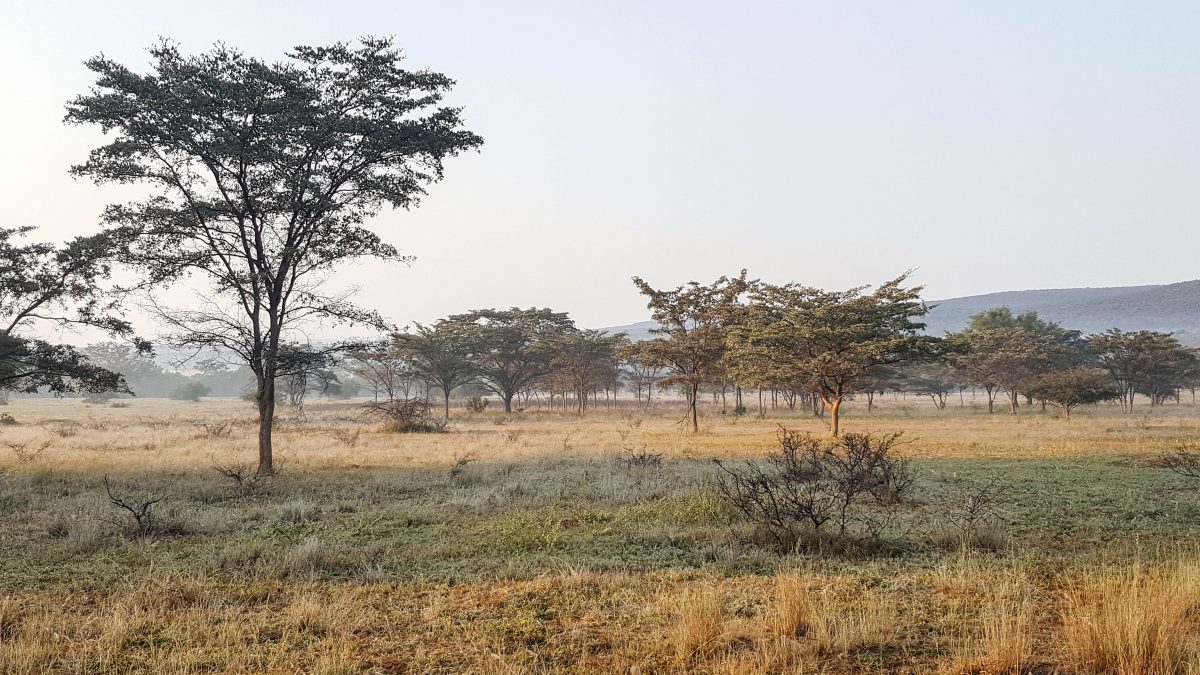 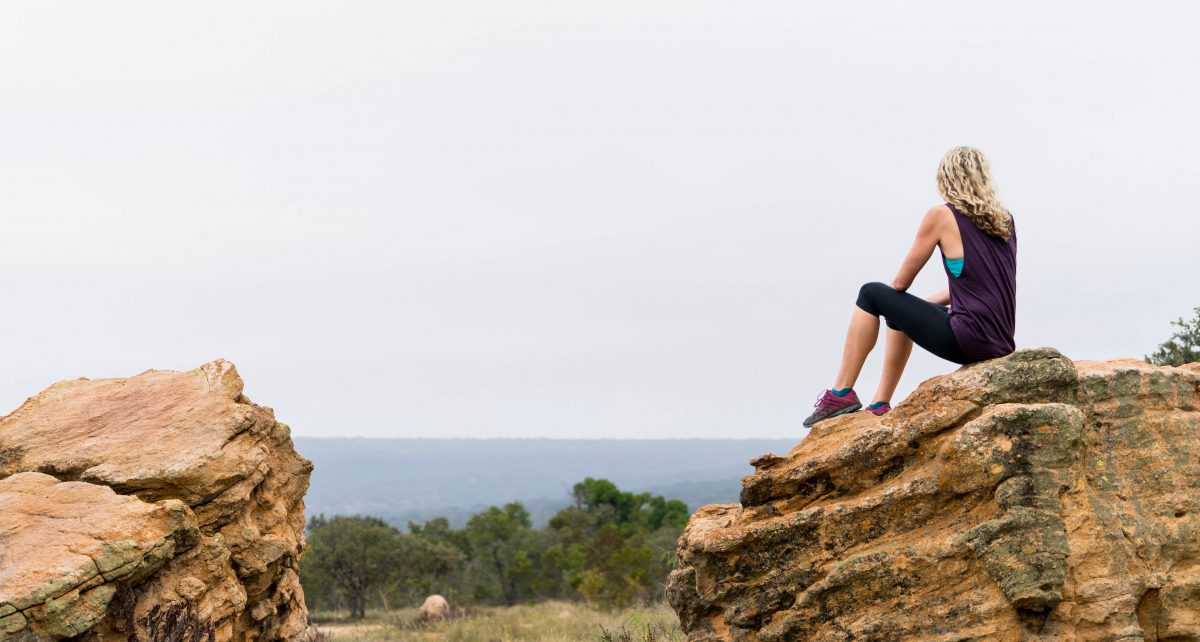 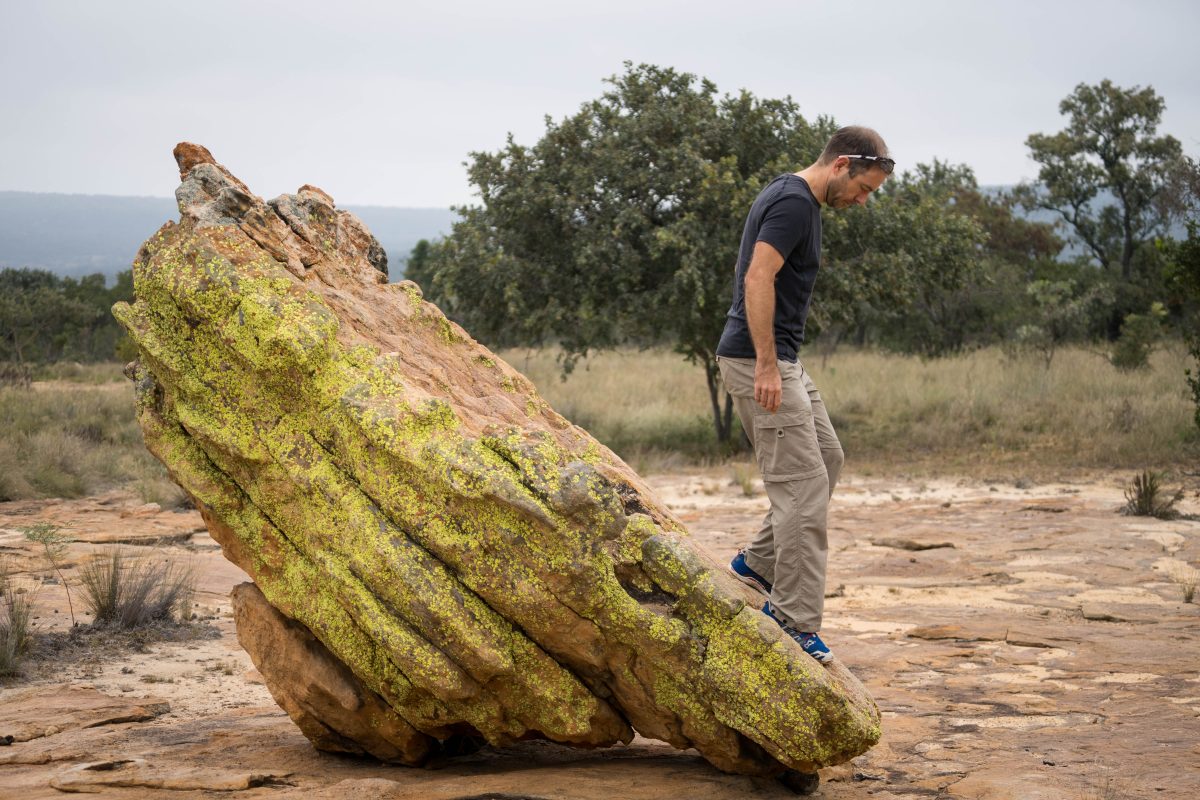 You can’t really go to South Africa without checking out some of their iconic wildlife. Izintaba has a stack-load of cool critters to admire. You’ve already met the giraffes. There are also zebras, jackals, monkeys, warthogs, wildebeest, about a million impala, and lots and lots of others. When you first arrive and drive the kilometre from the front gate to reception, you’ve already seen quite a few. Needless to say it can take a while to get to reception, as everyone ooohhs and aahhhs and scrambles for cameras they didn’t think they would need just yet. 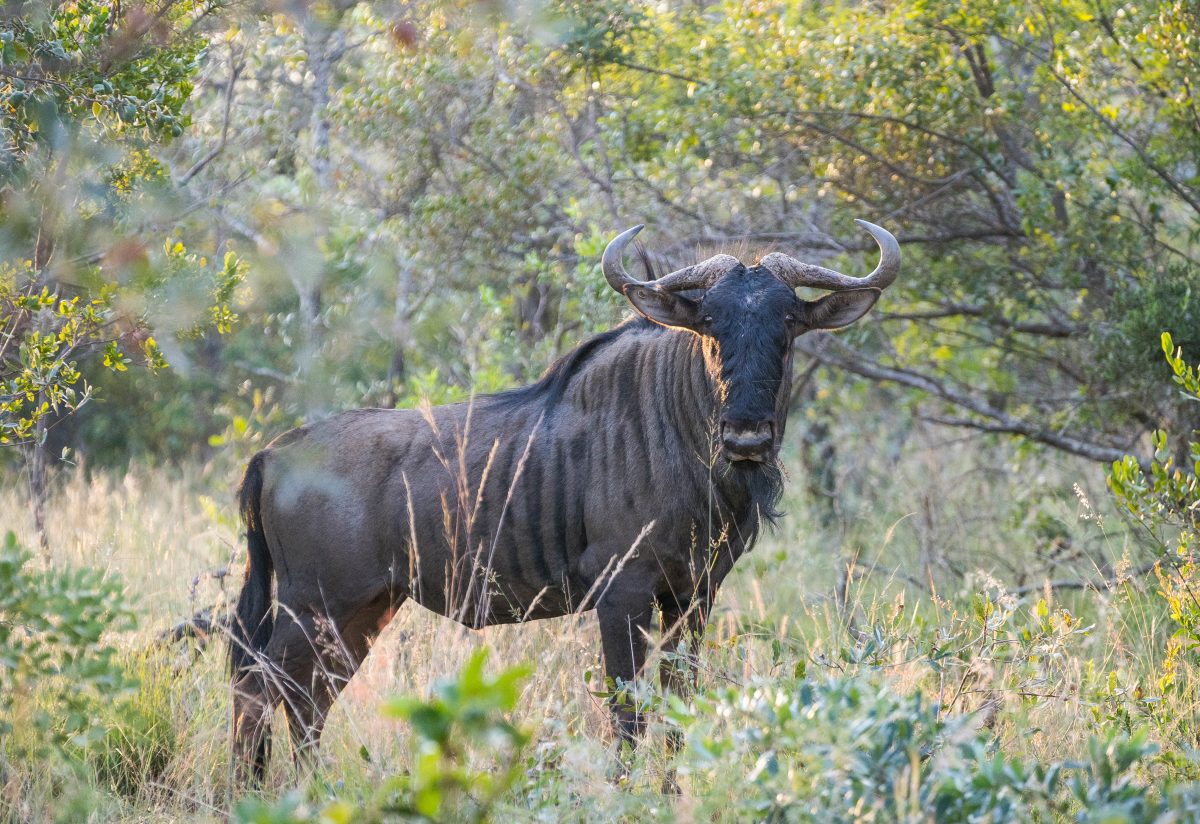 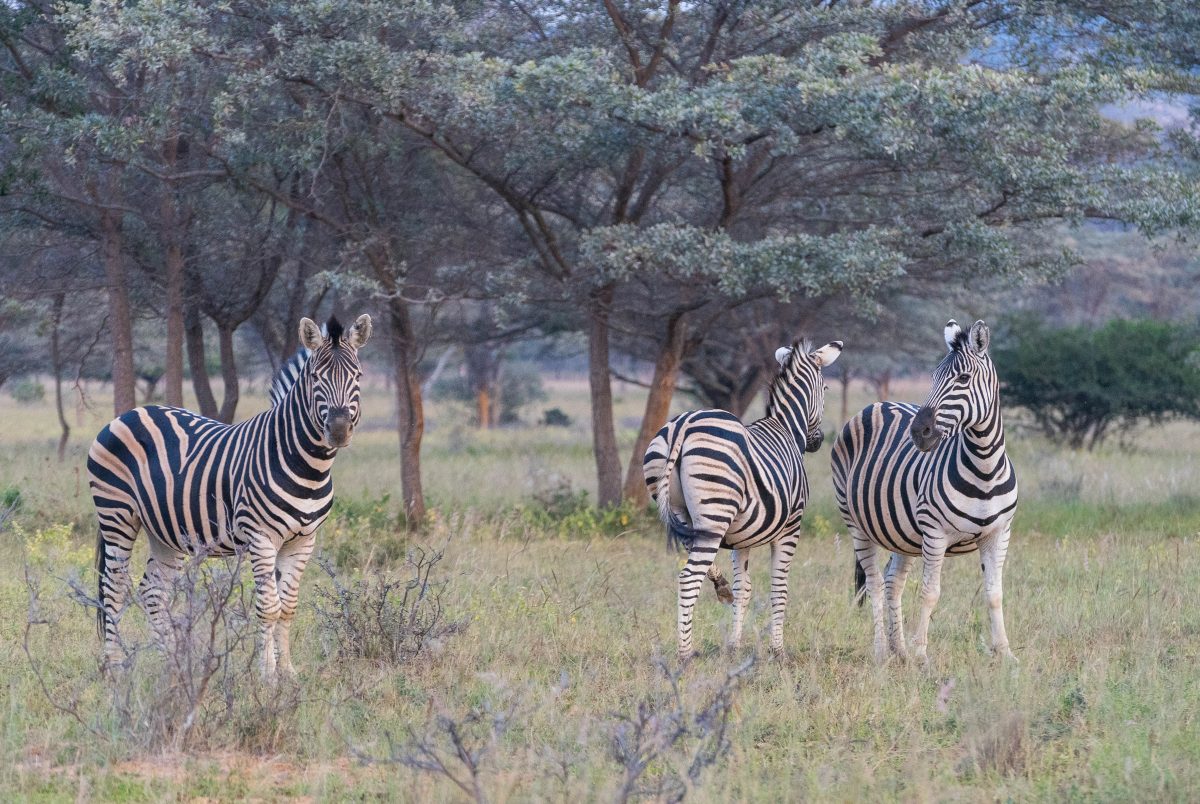 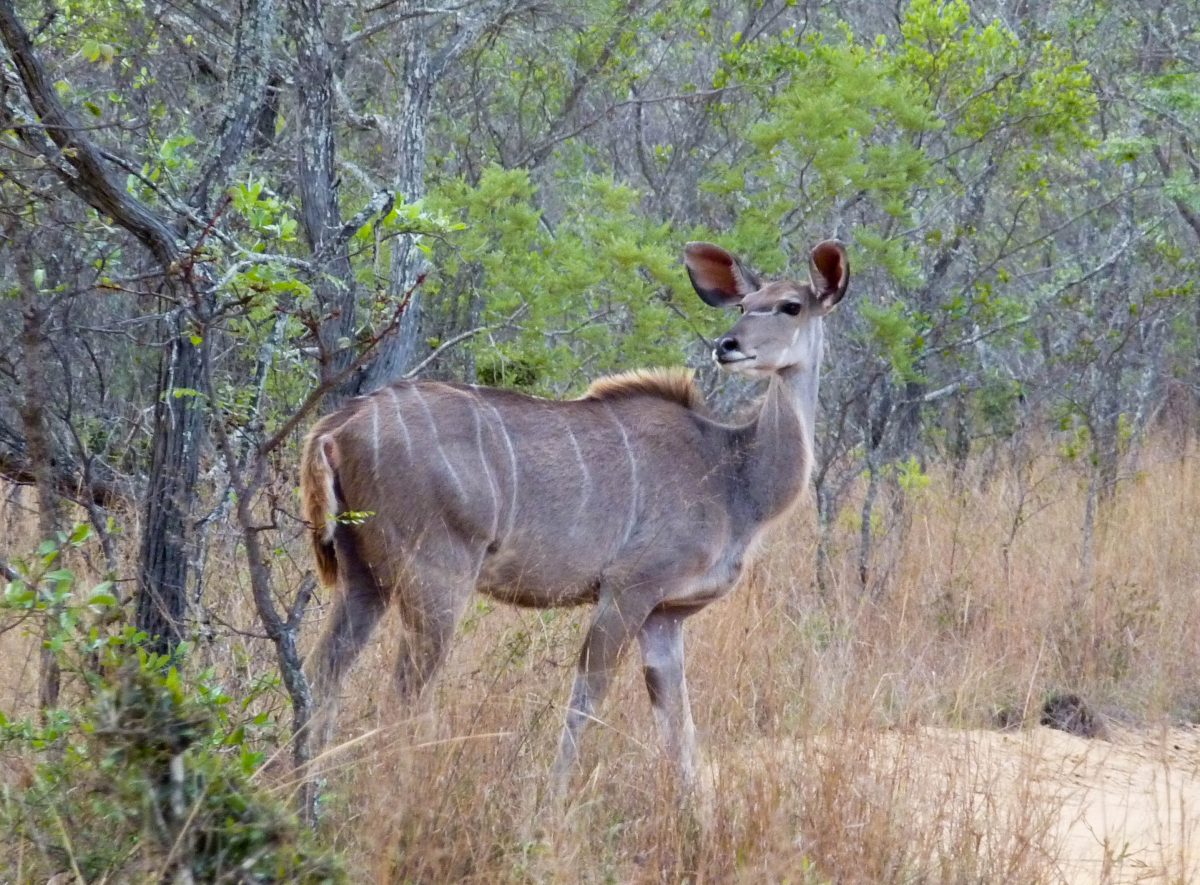 Did you notice that I didn’t mention there were any lions, elephants, rhinos or crocodiles in Izintaba? Or anything else with big teeth or a bad temper. Yes, I know what you’re thinking. Boring!! But before you start moaning about it, think about what it means for your freedom and independence. With no dangerous animals, you can wander around as much as you like without having to worry about being mauled or eaten. And that’s always a good thing!

The property is two kilometres wide and six kilometres long, with about 40km of tracks to explore. You are free to wander about the property as much as you like, by car, mountain bike or foot. And it is pretty much guaranteed you will see animals every time you leave the lodge. It is quite special when you walk around a corner and there is a zebra in the middle of the track!

I had a running event coming up so I needed to get some kilometres into my legs. This was actually the perfect place for it, particularly considering we were in South Africa. If we’d stayed at my mother-in-law’s place in Johannesburg I would have, unfortunately, felt quite unsafe running around the streets on my own. Quite ironic (and sad) that I felt safer running with these animals. So on 5 mornings out of the 7 we were there, I took off, either by myself or with Mr. Ironman, to run the sandy paths and to scare an animal or ten. Do you know how cool it is to lay your footprints alongside those of dozens of African animals? They were easily some of the most memorable runs I have ever done.

Oh, and it turns out that the animals are scared of people but not scared of cars. You can get very close to them in a car, but if you are on foot and you get within about 100 metres, well, you saw what happened with the giraffes. 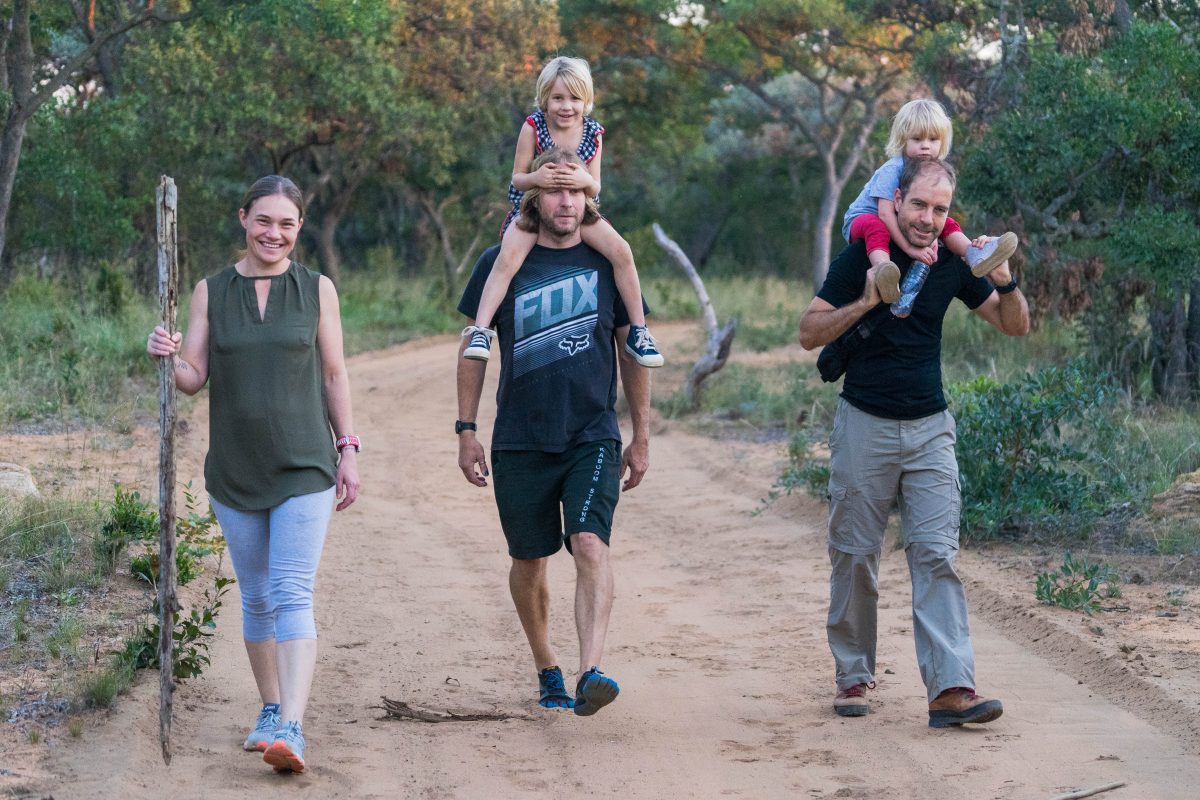 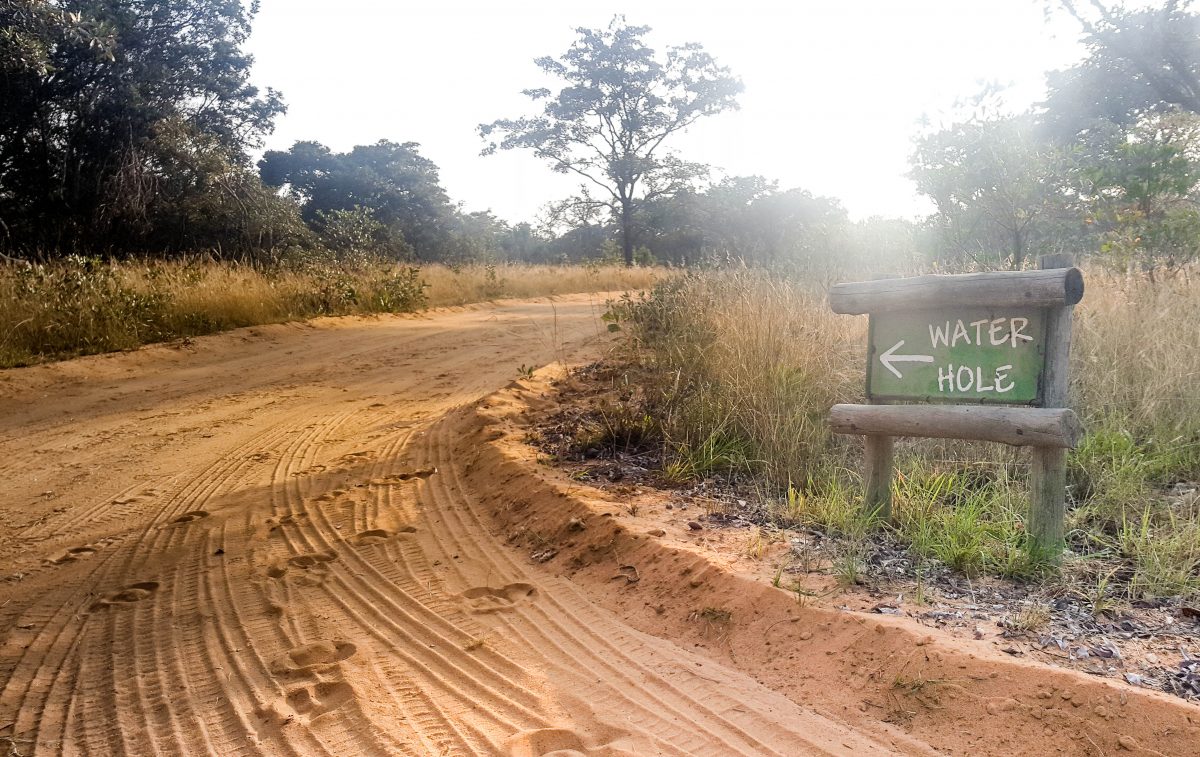 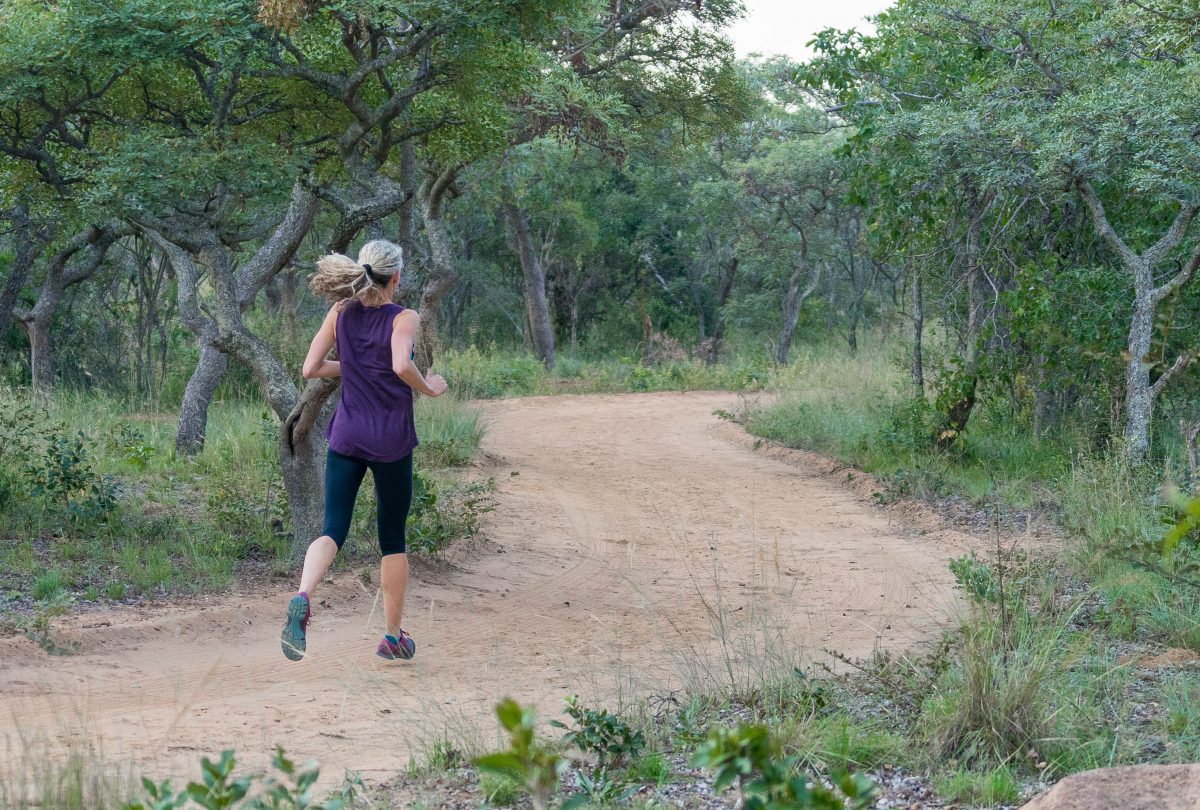 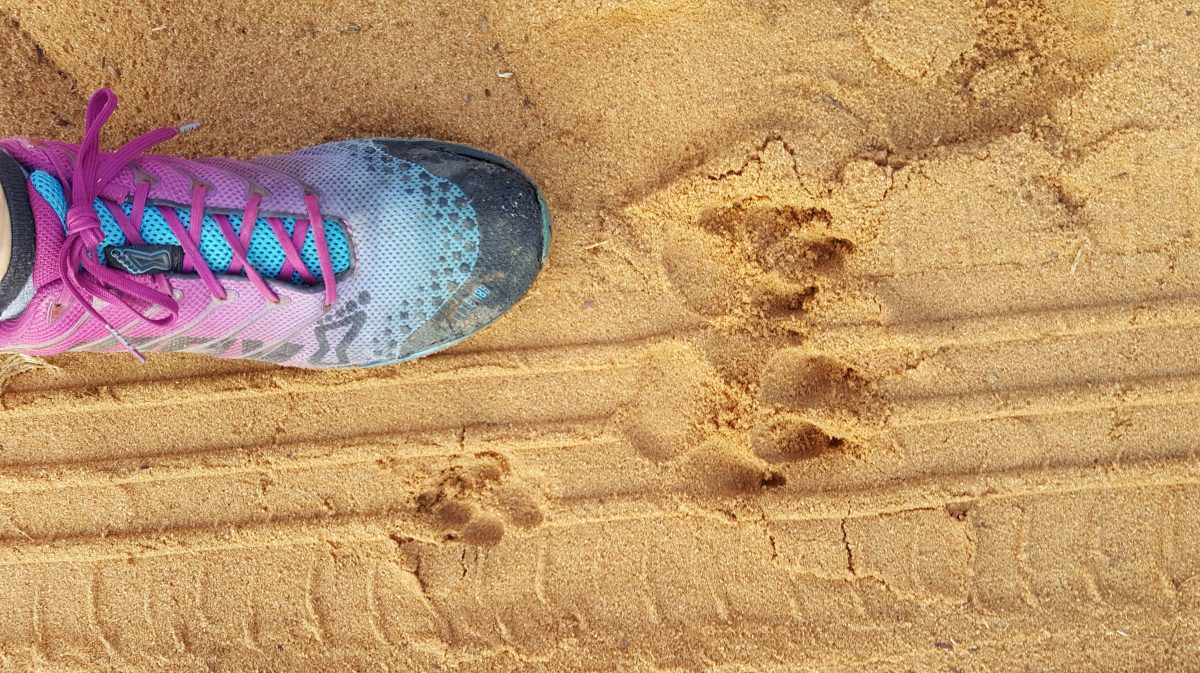 4) No Wi-Fi or television

Normally this would freak me out a bit (the Wi-Fi bit anyway), but in this place it was actually really easy to switch gears.

The two nieces, Miss Five and Miss Three also took a little adjusting. Once they had scampered through the lodge, exploring the rooms one by one, Miss Five bailed up her Dad. “I can see there’s no TV here”, she accused, hands on tiny hips. But as soon as this was confirmed (and a minor spat was averted) she took off outside and started hunting dung beetles.

The kids had to be creative. Playing with dirt and sticks soon became as interesting as Peppa the Pig, and playing with dung beetles became their favourite game. All the dung beetles were called Lilac by the way (don’t ask, I don’t know why either…) and Lilac was picked up, flown to different parts of the garden, cuddled, kissed (!!), had her dung stolen, and one unfortunate Lilac even had her head removed. Though Miss Five reassured us that she had put Lilac’s head back on. Oh, well that’s ok then…

It caused a little chuckle amongst us when we witnessed Miss Three running across the garden with what looked like a ball of dirt screaming “Lilac!!! Here’s your poo!”

And if they got bored with the dung beetles we took them to the jungle playground.

For me, time was spent walking, running or driving around the park, taking a couple of thousand photos, eating, reading and just chilling with the others. It was actually nice to read a trashy novel for a few hours without feeling like I should be doing something more constructive. 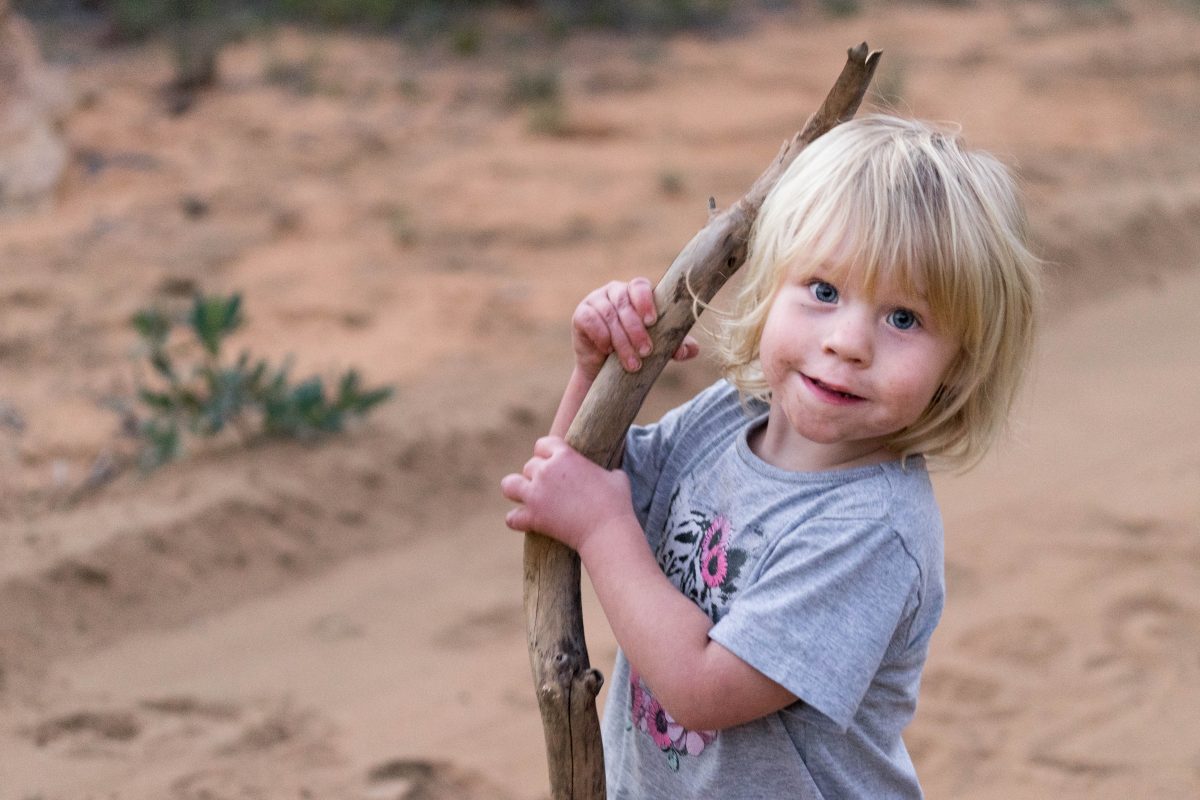 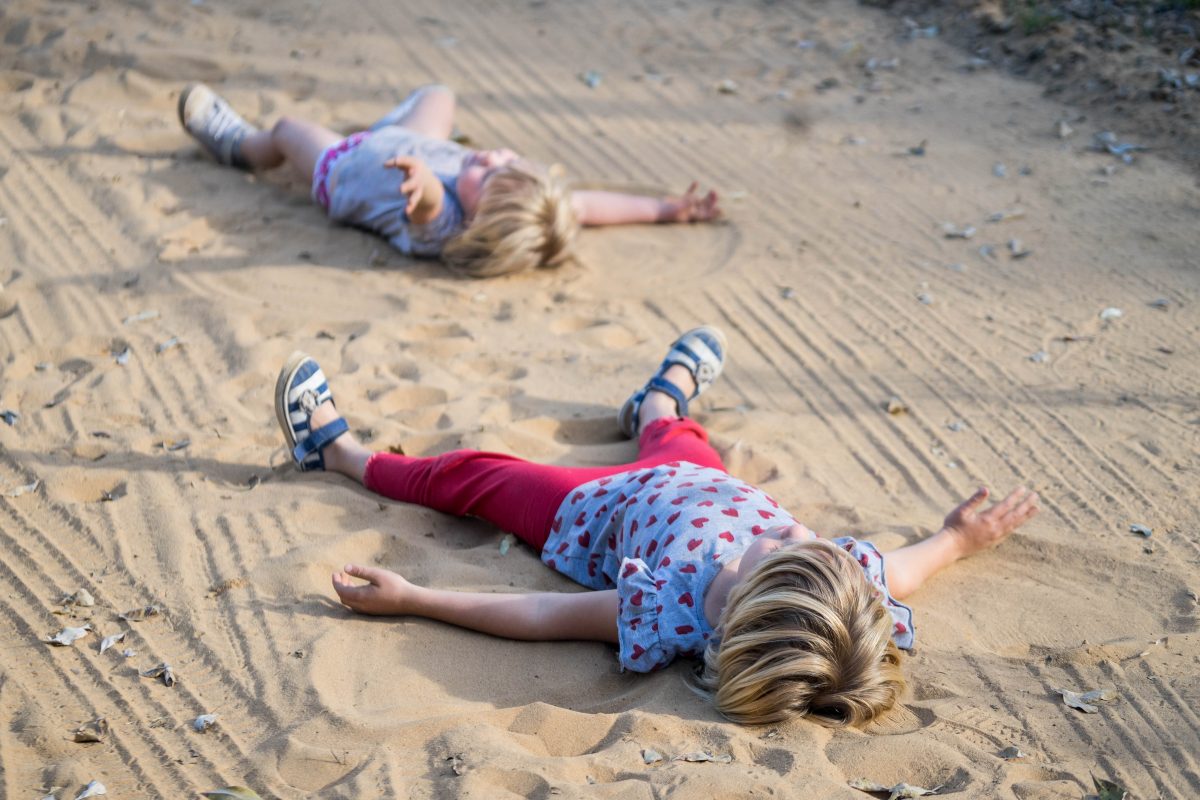 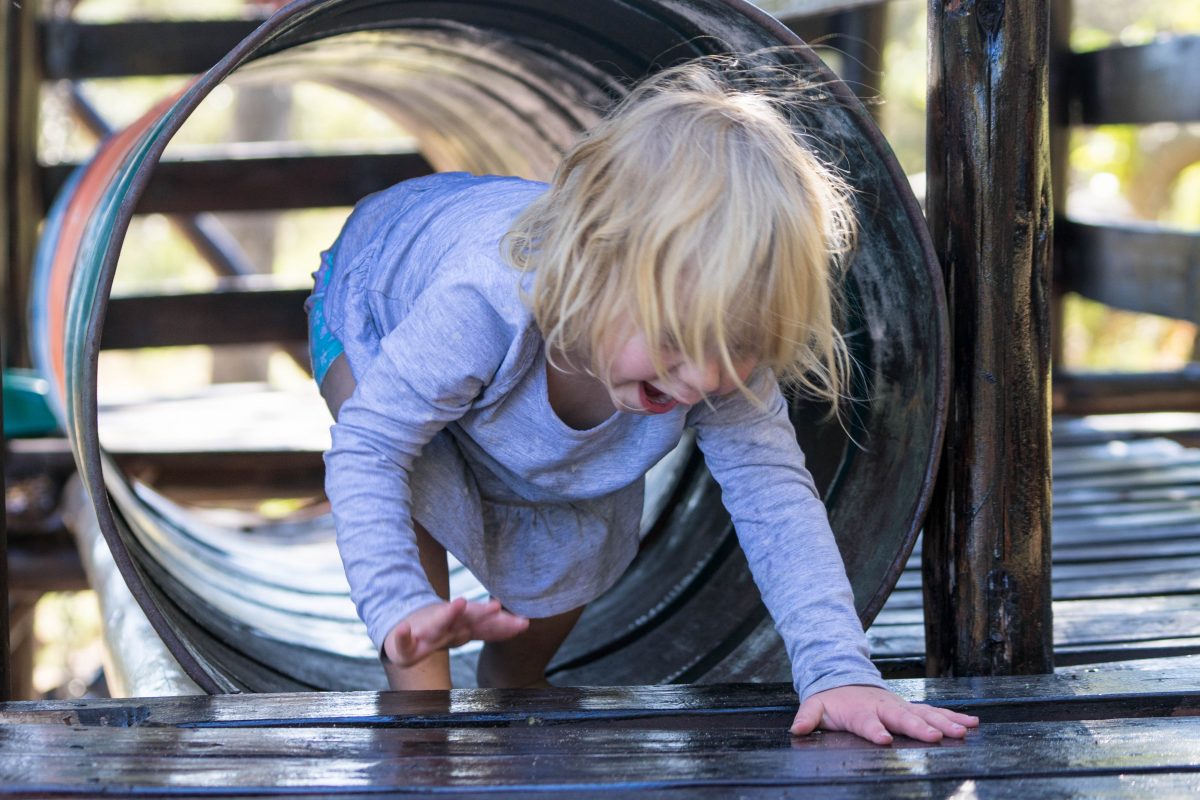 If you are looking for a luxury escape, with all meals and tours included, world class dining, some boutique shops and maybe an infinity pool or two, then sorry, you have come to the wrong place. Izintaba is a little more low-key than that.

There are several lodges of different sizes at Izintaba, accomodating groups of 4 to 17 people. We stayed in the Giraffe Cottage which was the perfect size for our group  of 6 adults and 2 kidlets (and 3 dogs!) The lodges are huge and amazing, with thick mud walls and thatched roofs. It was a great place for the whole family to be together and yet there was still enough room to find space to yourself (which, let’s face it, is necessary when you are with your in-laws 🙂 – No! I love them really!!)

Unlike at some game parks, the lodges are fully self-contained. Although you can organise a game drive with the park owners, and special dinners are available on request, guests are pretty well left to their own devices. We carted in what seemed like a whole year’s worth of food and ate delicious home-cooked meals every day, including several braais on the open fire. Yum!

And we organised our own game drives. No guide or gun required! 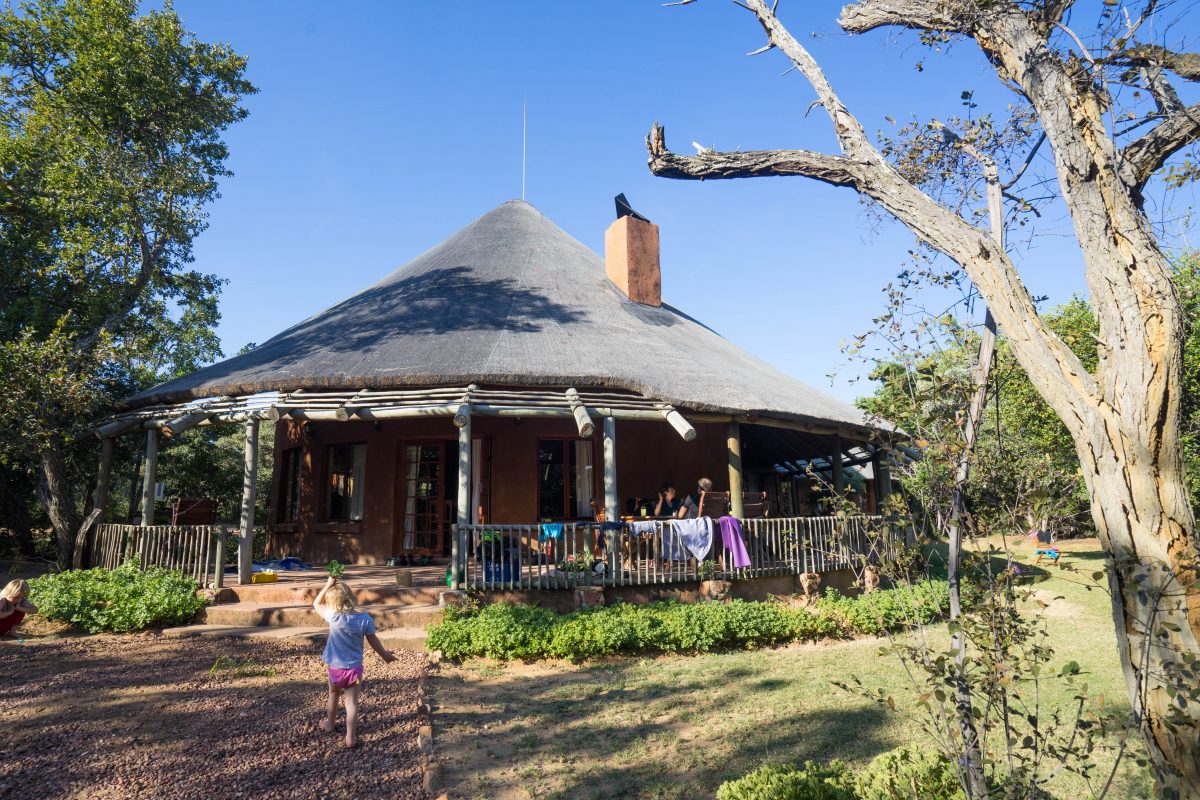 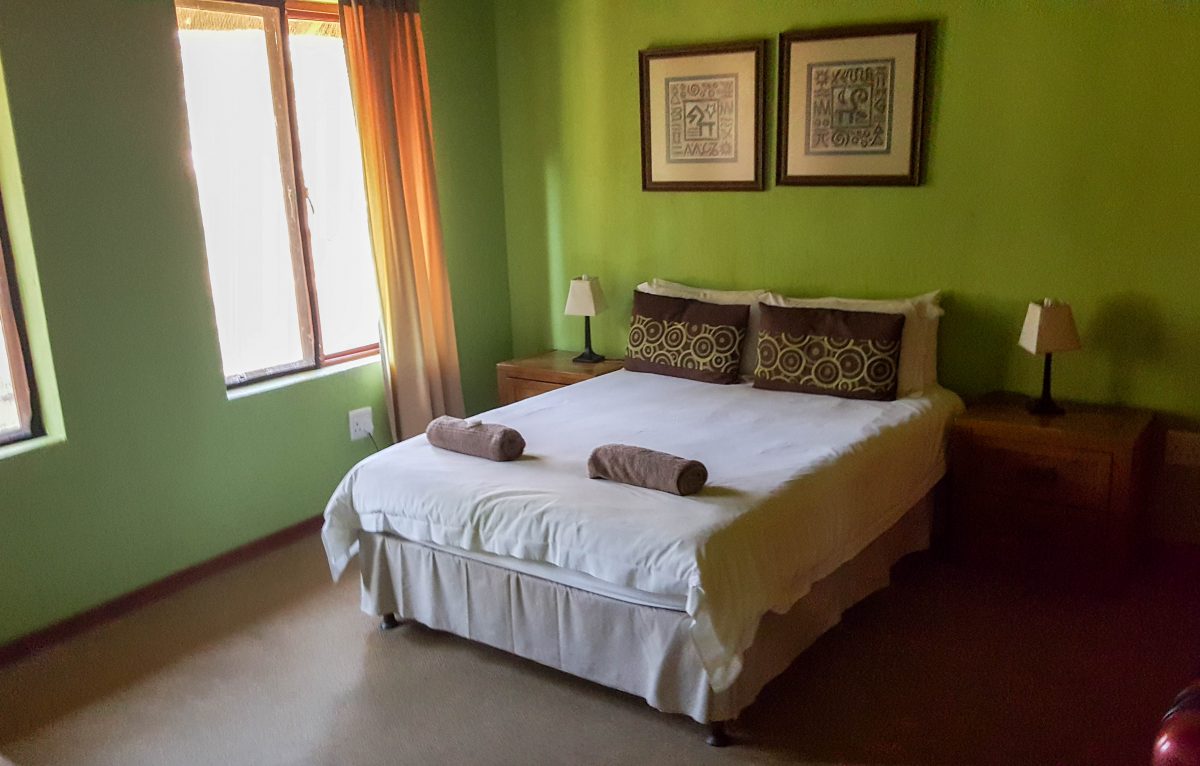 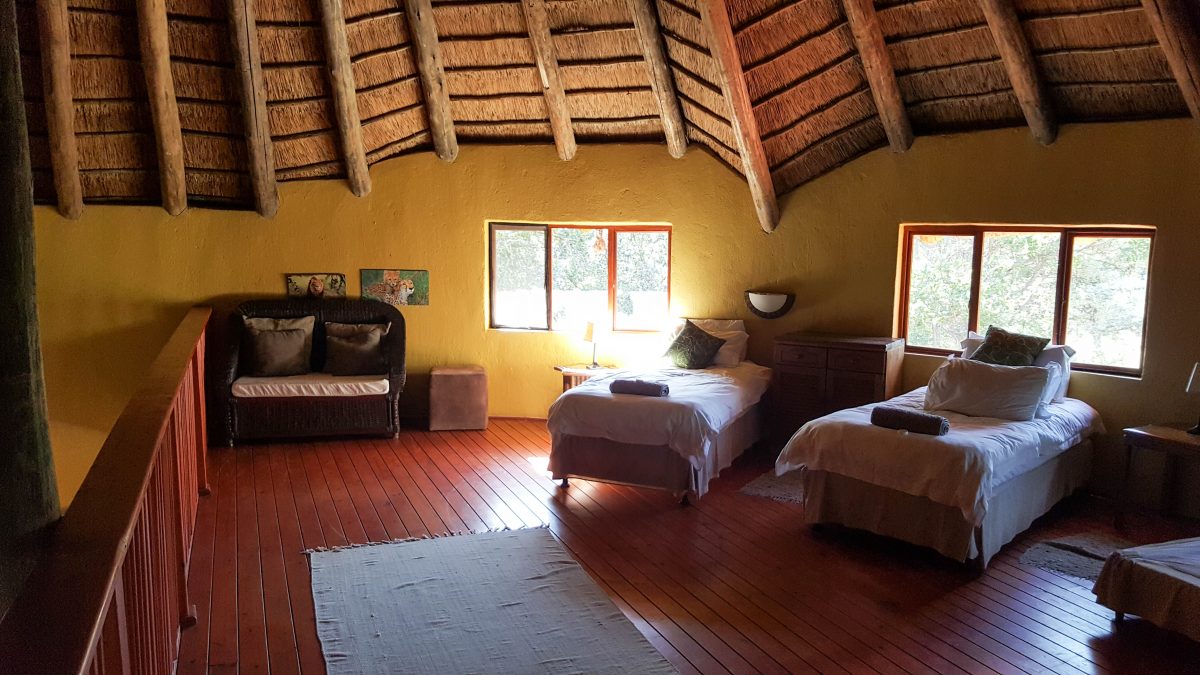 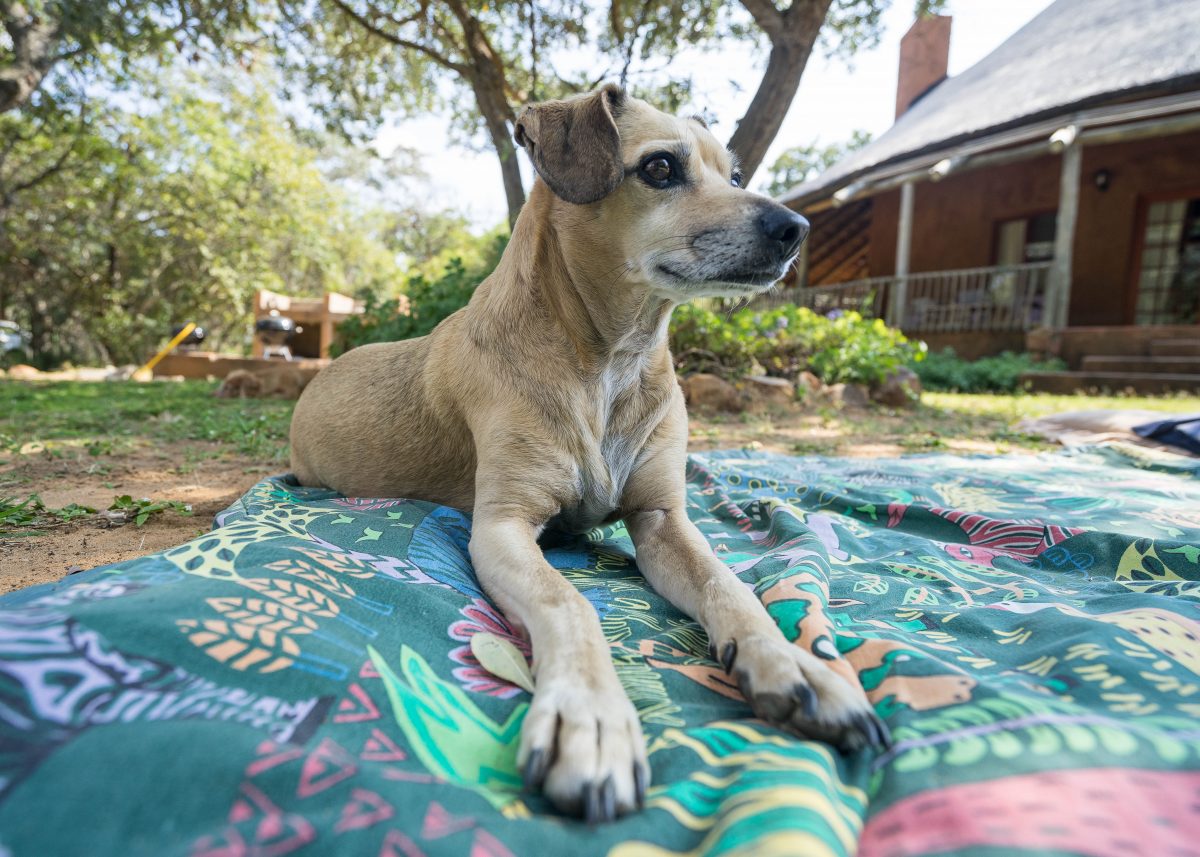 Pretty sure we’ll be back next year! 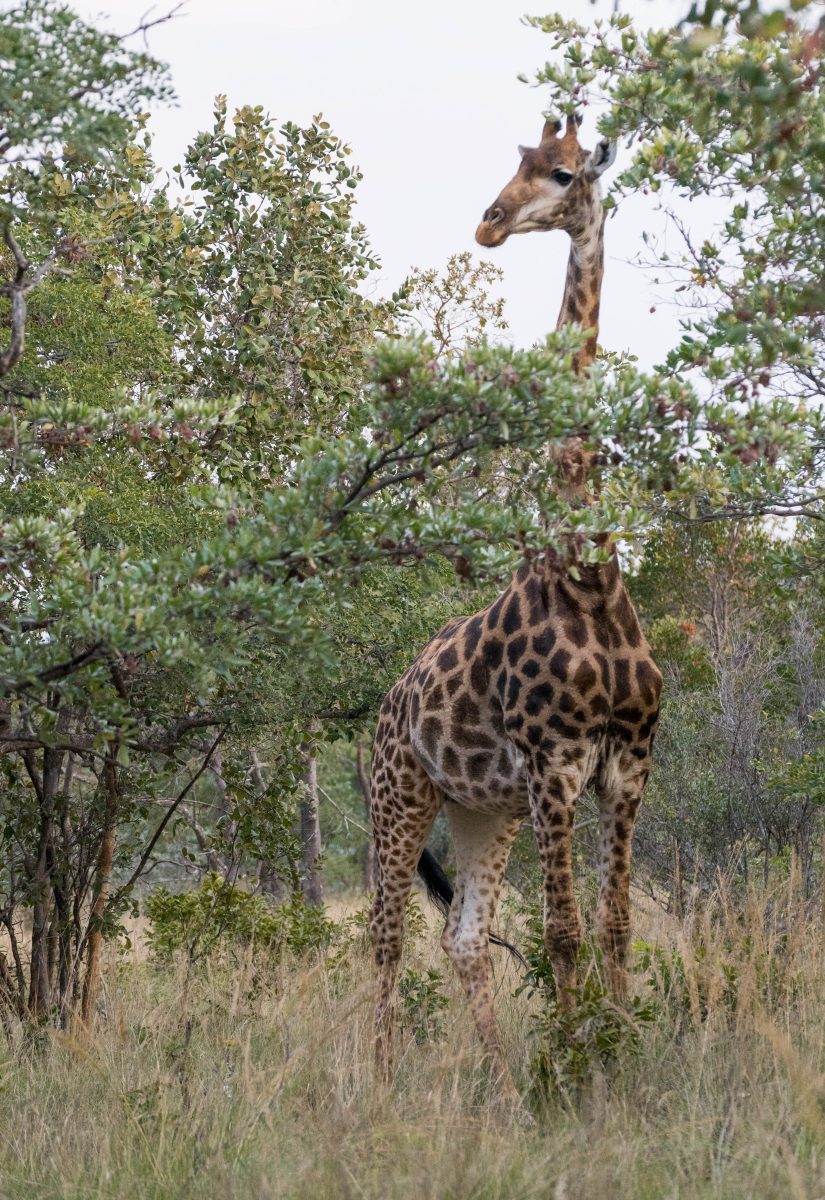 10 tips for using the toilet in Antarctica