It’s minus 15 degrees Celsius outside (it is summer after all), but it’s a lovely 18 degrees inside. I sit in the cosy lounge room with a hot chocolate, looking out the window. Outside, the sea ice on McMurdo Sound is starting to break up, exposing dark patches of frigid water. The ice extends across the sound to where the Transantarctic Mountains raise their snowy peaks into the sky. Beyond the mountains is the vast, windswept, icy interior of Antarctica. 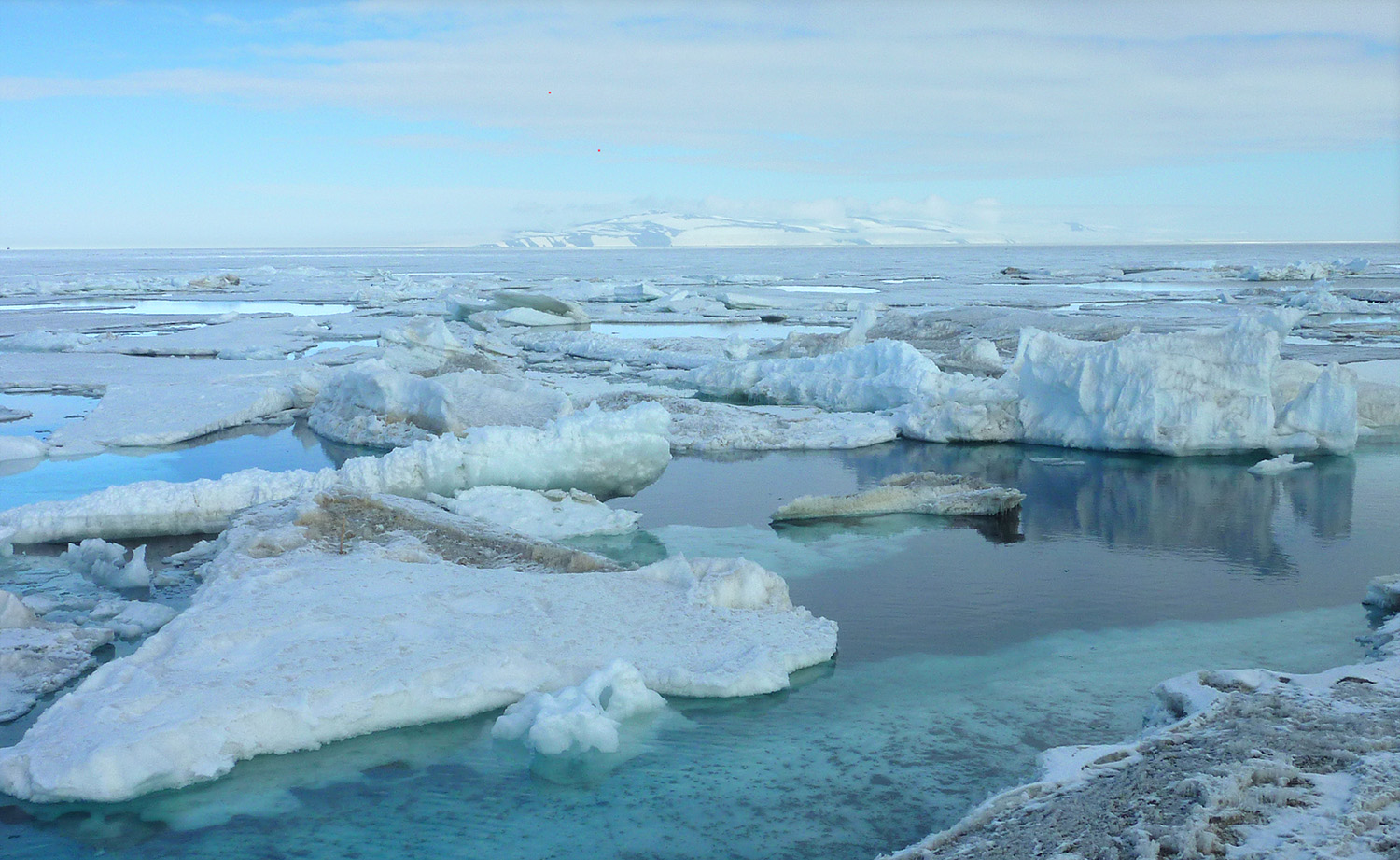 Outside is all ice and wind and biting cold, but inside is a warm, cosy little haven. There could be a blizzard out there: freezing temperatures, gale-force winds, horizontal snow. But inside, still warm and cosy.

This warm little haven among the ice is Scott Base, a New Zealand owned facility situated on Ross Island on the edge of Antarctica, the coldest and windiest continent on Earth.

We arrived at Scott Base via an uncomfortable but unforgettable eight hour flight from Christchurch, New Zealand. The US Air Force Hercules touched down on Pegasus Airfield, which is on the Ross Ice Shelf. If you are worried about a plane landing on ice, don’t be. The ice is about 120m thick, plenty thick enough! In fact they usually land on the sea ice which is only 3m thick. Scary!

We were shuttled across to Scott Base in a variety of snow and ice-suited vehicles and even though it was after midnight when we arrived, we were given a tour of the facilities. The Base is made up of a bunch of cucumber green buildings, connected by all-weather linkways. The linkways mean you don’t need to go outside to do many of the things you need to do. It is quite convenient. You can have a nap in your comfy bunk bed, grab some roast lamb for dinner, wash the thermals you’ve been wearing for 7 days straight, buy some postcards and a  Scott Base branded hoodie, watch some DVDs,  spend an hour on the treadmill, erect a polar tent, knock back a couple of pints, shoot some pool, service a snowmobile or update your facebook status, all without going out into the cold. 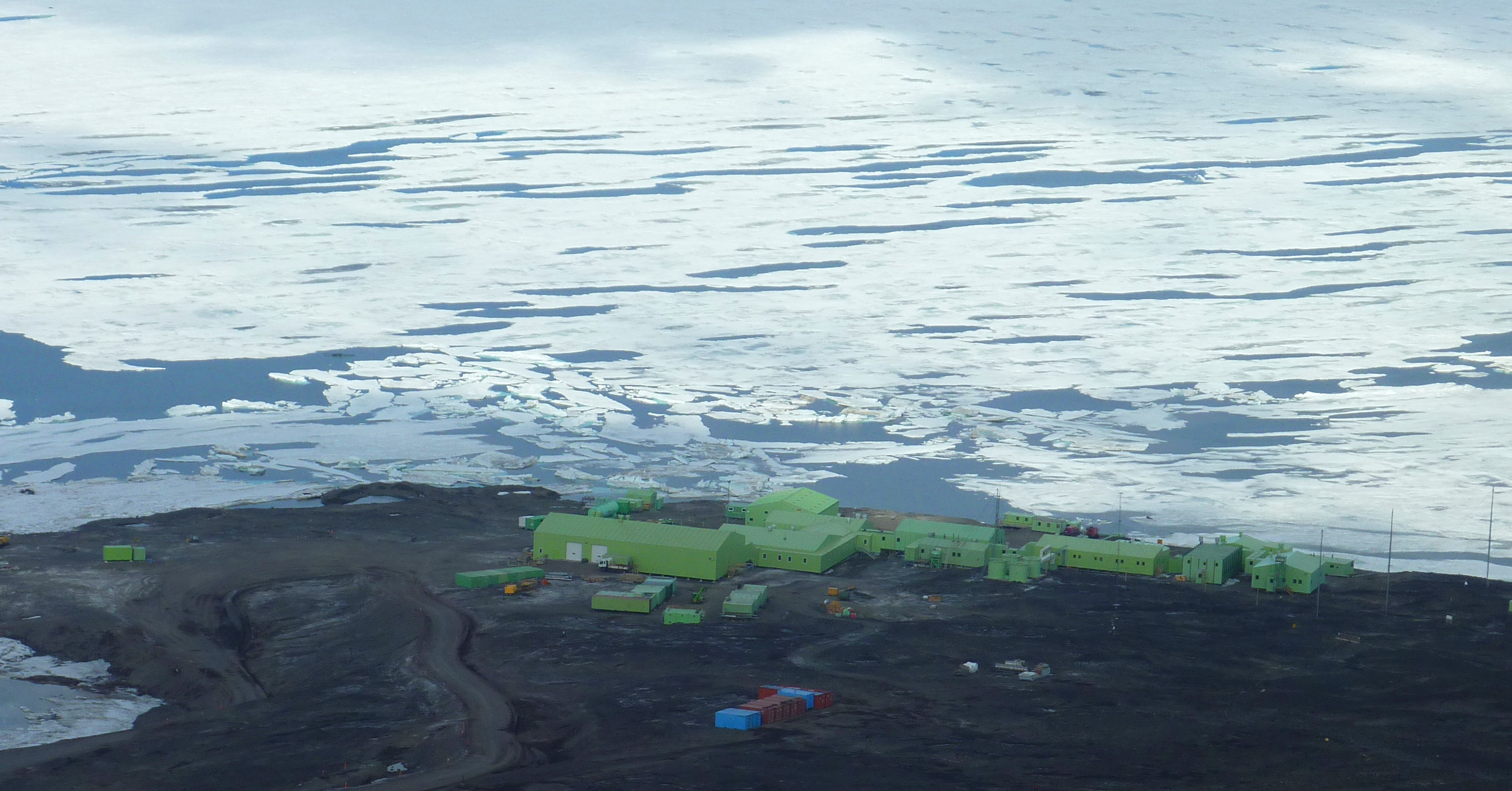 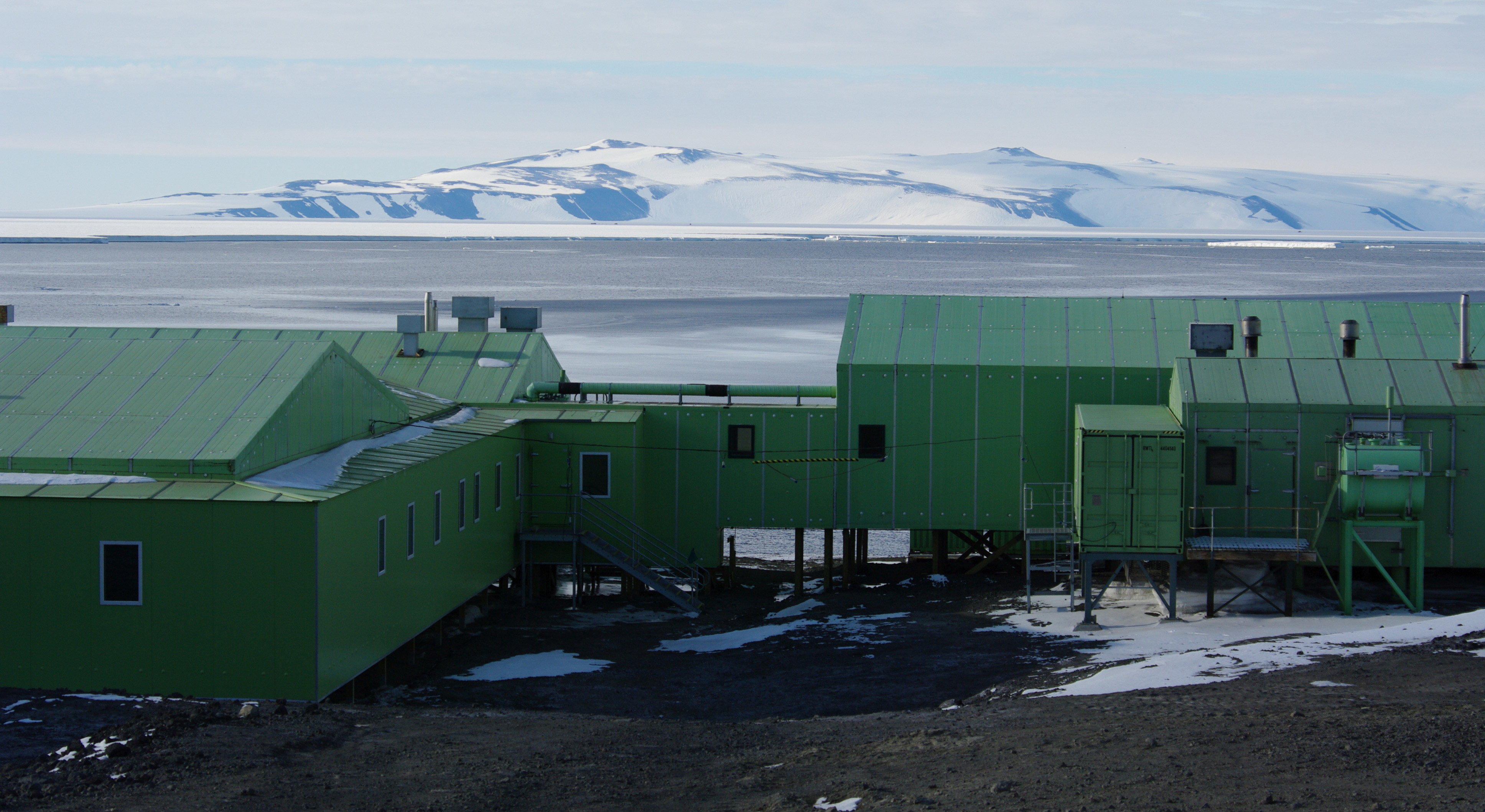 If you are thinking Scott Base sounds like a good place for a holiday, well sorry, they don’t take tourists. The Base is run by Antarctica New Zealand and is a centre for Antarctic and climate research. It’s not just researchers that stay here though, they also need staff to keep the base running, chefs, domestics, mechanics, operations staff, field guides etc. Luckily for me, every year they also host a group of University students for a couple of weeks.

Scott Base is kinda like school camp. But for adults. And a bit colder. Everyone sleeps in bunk beds, there’s a big communal dining area, there’s a roster for kitchen clean up, you’re only allowed to have very short showers, and you get in trouble if you wander too far from Base without telling someone where you are going.

The Base becomes a close-knit little community, a group of people sharing a small space for anything from a week to 12 months. We were only there for three weeks but if you were there for a whole season, particularly over winter (when there are only about 14 people at the Base), you’d get to know everyone really well.

Scott Base has the capacity to accommodate up to 85 people, but when the 20 of us arrived the total number of people in residence was pushed to 90. And if all 85 beds are full, where do the extra five people (myself included) sleep??

In the shipping container out the back of course… 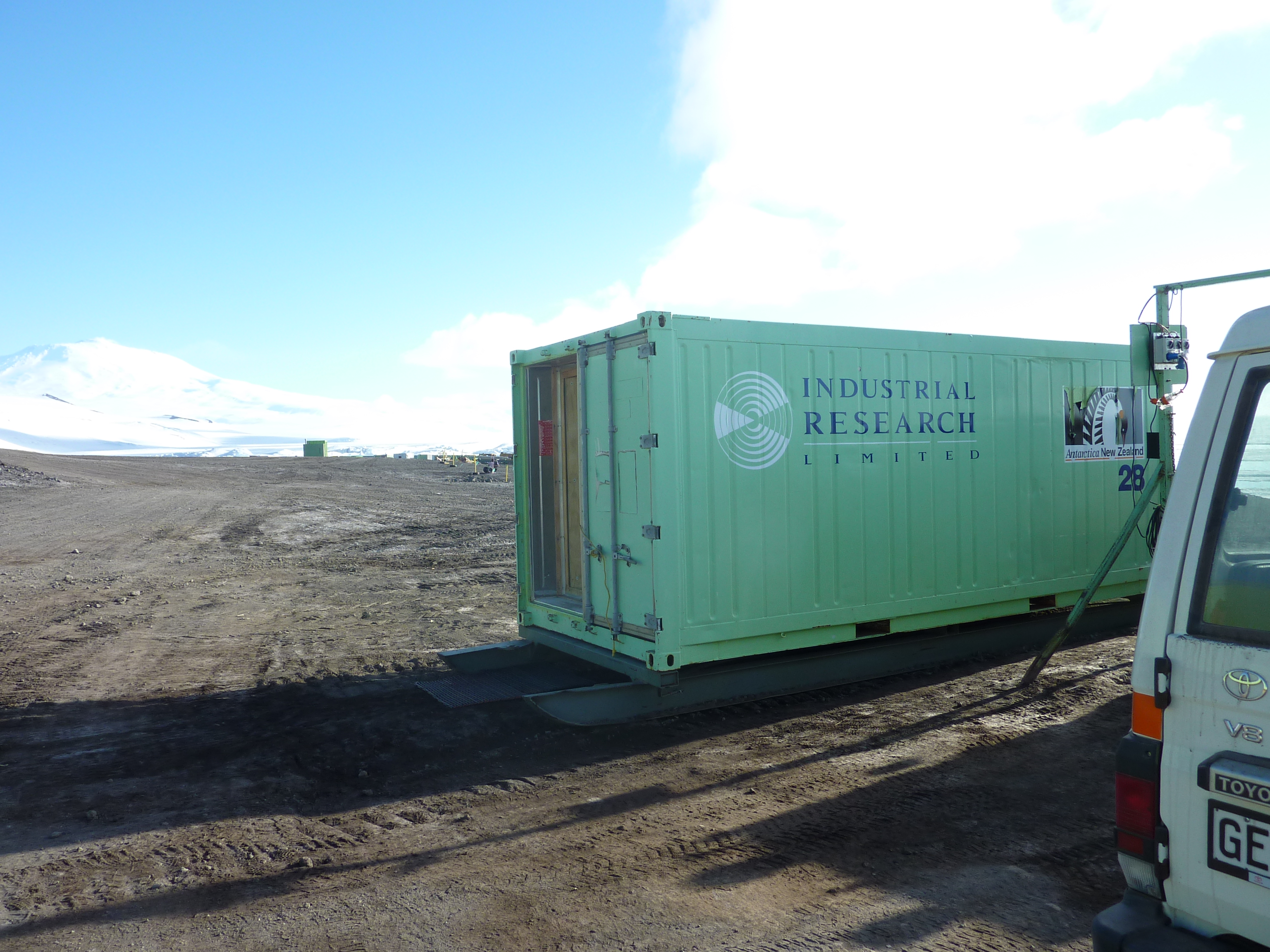 New Zealand is pretty famous for what they do with shipping containers since the creation of the Re:Start Mall in Christchurch after the 2011 earthquake. So maybe it is no surprise that a shipping container has formed part of the living quarters here at Scott Base.

It is not as cold and uncomfortable as it looks from the outside. There are comfy bunk beds and a heater so it was quite warm and cosy. The only problem was that if you need to go to the loo in the middle of the night, it meant putting on the boots and jacket, then bracing yourself against the cold wind outside while crossing to the main building.

The only time we got to sleep inside was when the weather turned to Condition Two (Condition One is normal weather conditions, Condition Three is “bloody-big-storm” conditions, so Two is somewhere in between). They wanted everyone to be in the main building in case the weather got worse so we were “upgraded” to the cushioned bench seats in the library. Unexpectedly comfy actually!

Meals at Scott Base are prepared from an industrial kitchen by two chefs and eaten in the communal dining room. It is buffet style so you serve yourself. And the food… oh the food! I can’t get over how awesome the food is! If you are around the Base for the day there are five scheduled meal times and I made sure I was there for every one. Oh boy we ate well! The chefs were brilliant and served up some really awesome, delicious food. I, like most people, tend to eat more when I am cold. So when on the coldest continent on Earth… well, let’s just say I usually went back for seconds.

If you are stuck inside Scott Base during a Condition Two (or worse), there is plenty to keep you occupied. The lounge room has comfy couches, lots of books to peruse, and a great view of McMurdo Sound (complete with the occasional whale or penguin) out the big windows. If you are after more serious reading there is the library, with stacks and stacks of books about Antarctica: early exploration; natural history; geography etc.

There is a gym if you are feeling energetic, or a DVD room if you are not. There’s also a bar with a snooker table and a dart board. It’s only open at specific times though as the barman also runs the gift shop.

So there is plenty to do inside the Base and everything you need is right there. But who comes all the way to Antarctica just to stay inside all day? And why was I sitting in the lounge room, with my hot chocolate, gazing out the windows, when I could be out there? Well, because I’d been out there all day and it was almost time for bed, especially as tomorrow we would be going out into the field.

We were going to be camping on the Ross Ice Shelf for a week. In tents, in the cold, the only heating being under our dinners…

PS. When I told people I was going to Antarctica, some of them looked at me quizzically and said “Why would you want to go there?”. I was shocked. Surely everyone wants to go to Antarctica???

So help me out here a bit, would you like to go to Antarctica? And if so, what is it that attracts you to the place?

Izintaba – 5 reasons why it is the perfect African getaway