Race Report – Dungog Dash & Dawdle (How I Fluked a Win)

Now I am not a particularly fast runner (no, no. It’s true). I’m more your average type runner. So how is it that I managed to win a running race?? Before I explain, first lets check out the place in which this miracle occurred…

Dungog is a lovely, small country town in the Hunter Region of New South Wales with beautiful rolling hills and more cows than you can poke a stick at. A few months prior to this run, the town was devastated by flooding in storms that affected a large portion of New South Wales. Many houses were washed away and three lives were tragically lost. With the town desperately in need of funds, there was extra incentive to sign up for the Dash & Dawdle as the proceeds from registrations go to the Dungog Shire Community Centre. 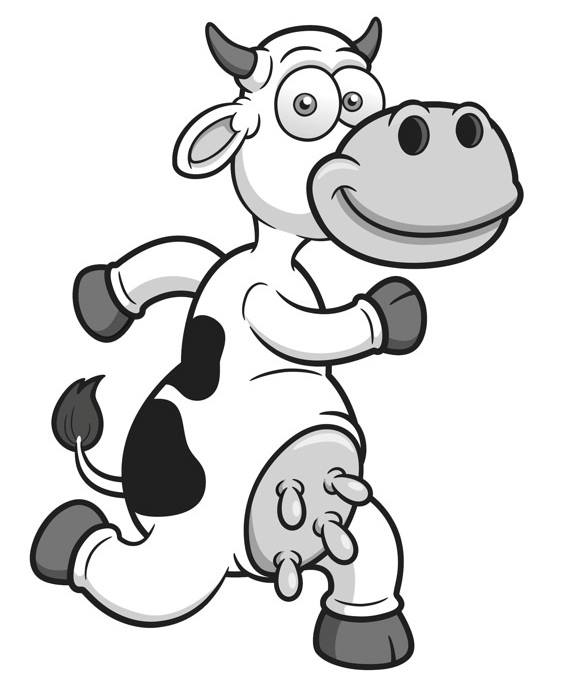 Of course I wanted to participate anyway. A cross country trail, beautiful bush surroundings, a number of distances including a nice short one… Sounds like my perfect run-match!

The Dungog Dash & Dawdle usually occurs in the first week of August. There is the 6km Dawdle, the 12km Dash and the recently added Half Marathon (from 2016 there is also the Kid’s 6km and Kid’s 12km. There is also a very cool Tail Runner Doggy Dash, Dawdle or Half Marathon. Fido will love it!). For various reasons (not just laziness), I prefer shorter runs, so it would be the mighty 6km Dawdle for me!

The course starts from the town’s showgrounds and runs through the scenic Dungog Common, an area popular with mountain bikers, walkers, and of course runners. 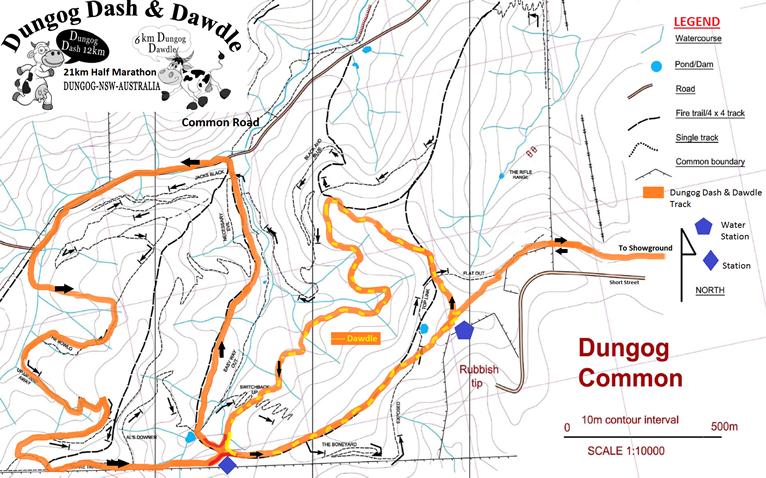 There’s a fair bit of elevation in the runs so here’s a few stats and graphs for the nerds out there.

On this particular day, the 2nd of August 2015, it was a beautiful sunny morning with a fresh winter chill in the air. The mascot (a cow of course) was busy photo-bombing. 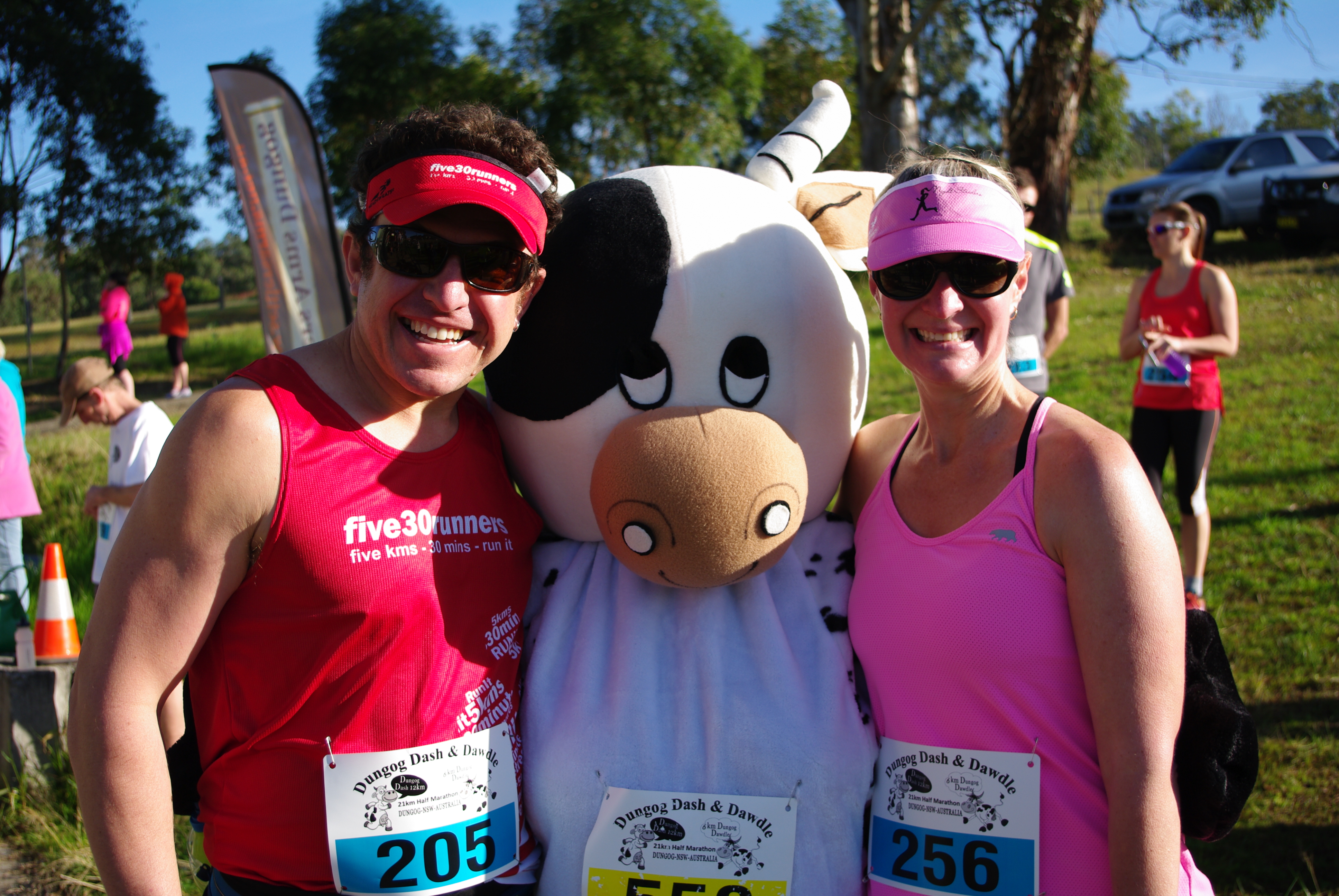 And there was also face painting for the kiddies. 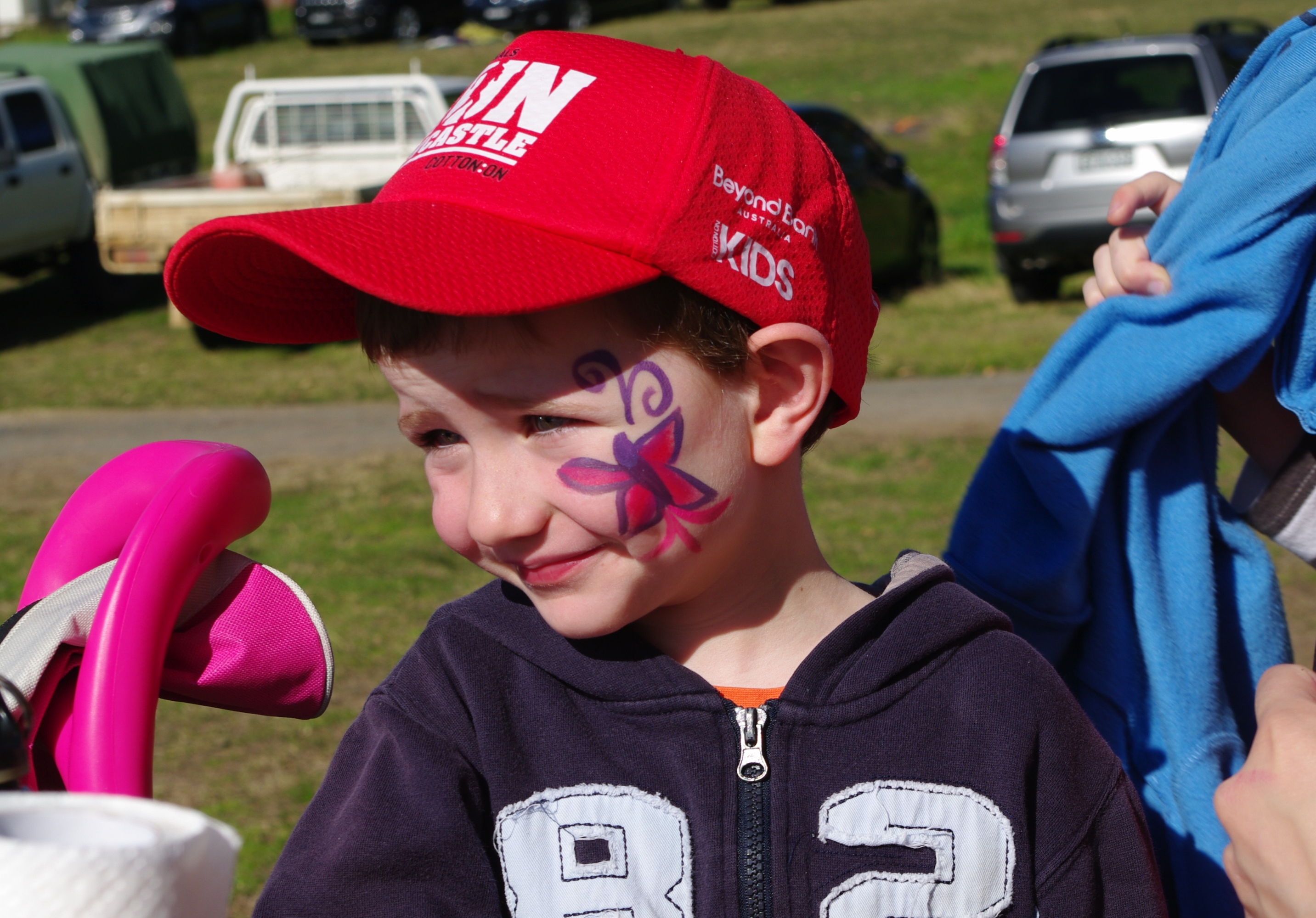 The races started at 8am, first up was the half marathon. The ever-present cow sent them on their way. 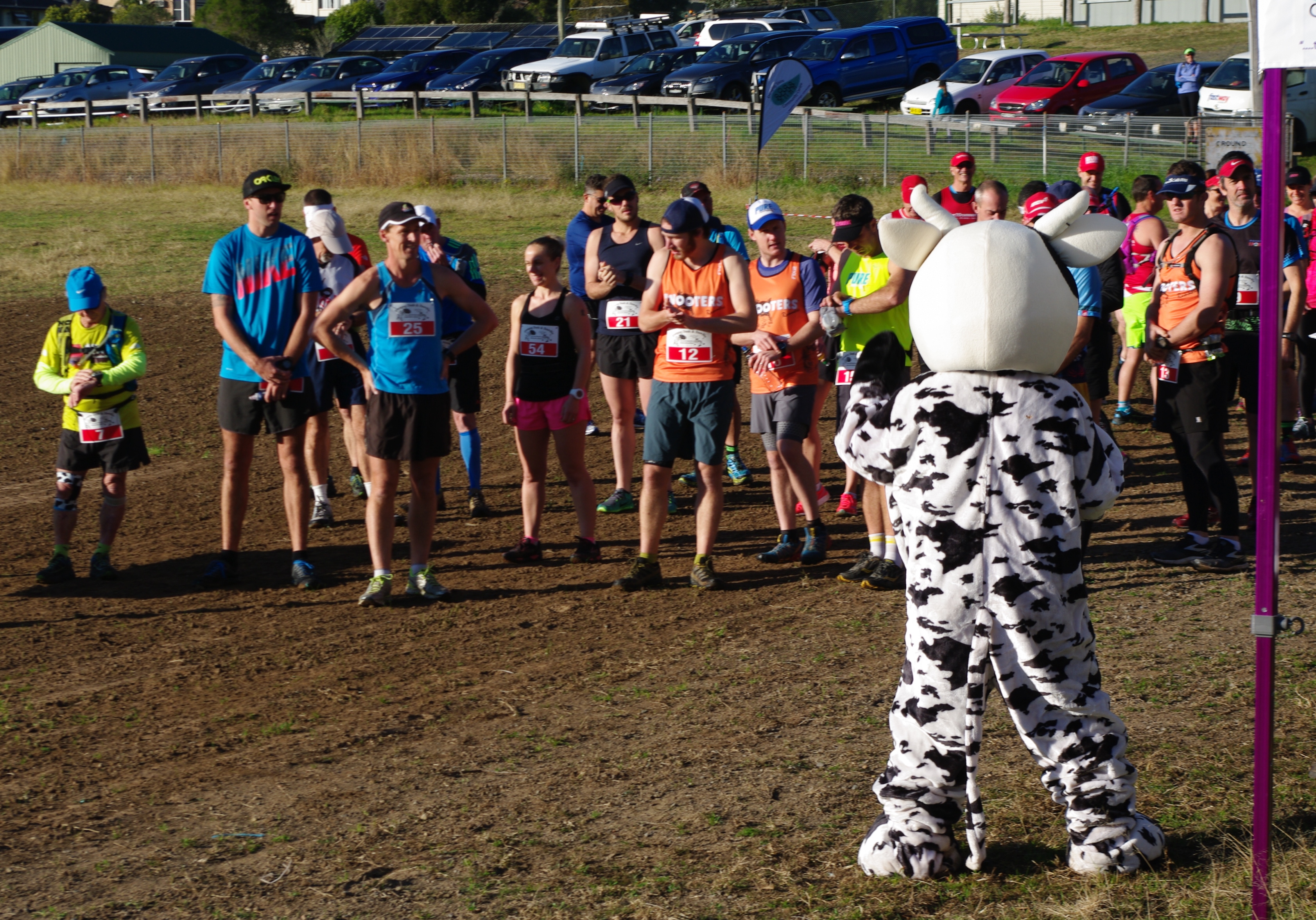 Then the Dashers and Dawdlers started together at 9am (actually we started at 8:53, much to the panic of one runner who had just stepped out of his car when we took off. Said runner then went on to win the 12km so the early start did not appear to disadvantage him).

After first doing a circuit of the highly divotted showground, with the threat of a twisted ankle looming at every step, we dodged many a cow pat, crossed a muddy pond and proceeded up a rocky ascent that had even the most hardcore runners slowing to a walk.

Then it was some very scenic (and tough!) running through open grasslands and along single-track trails through lovely forests. 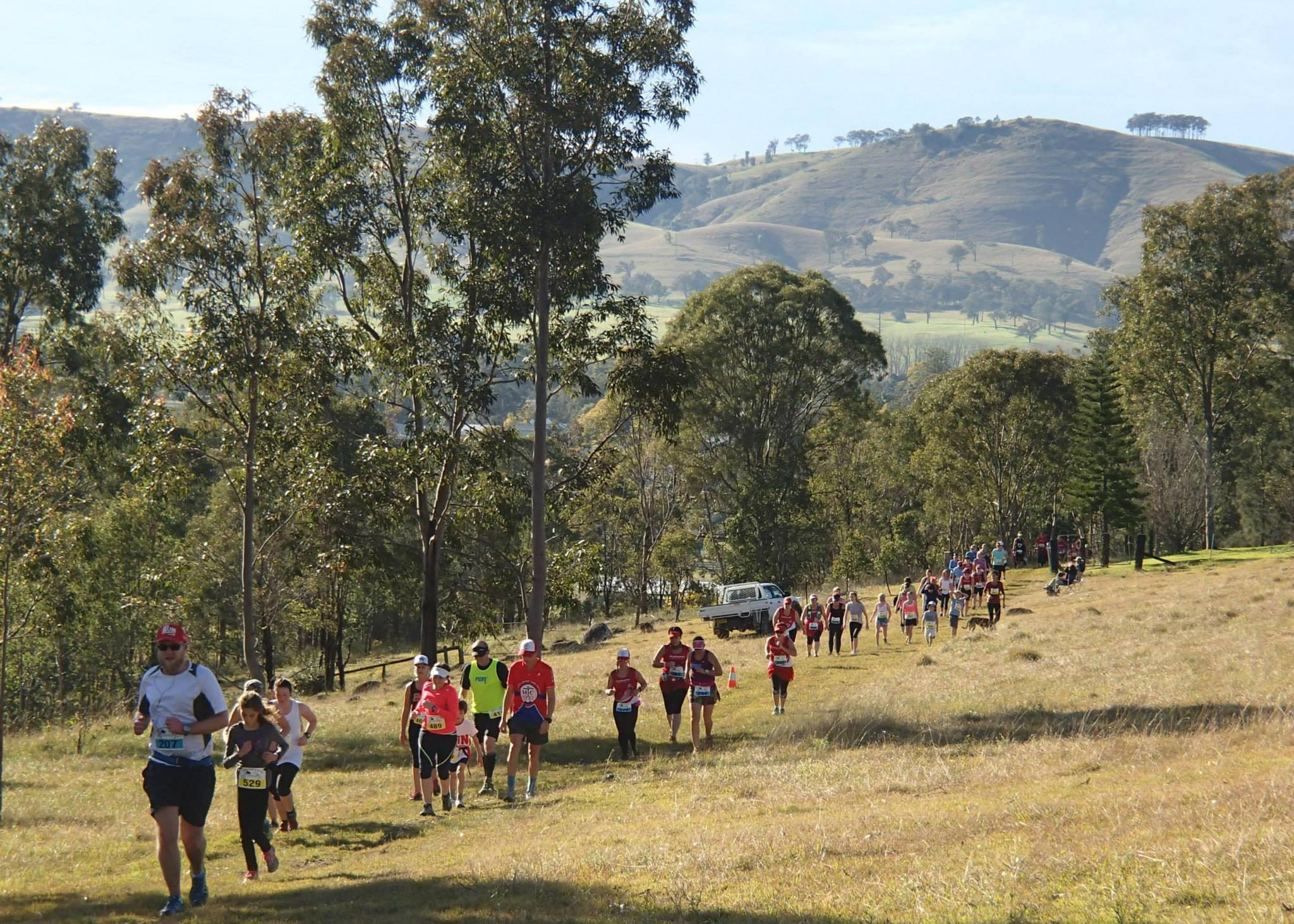 It was nice to encounter the on-course cheer squad… in the form of some local farmers. They were just hanging out, leaning against fence posts or perched on camp chairs, watching all the runners go by and offering some grunts of encouragement. A bit of entertainment for them on an otherwise quiet Sunday morning in “The Gog”. 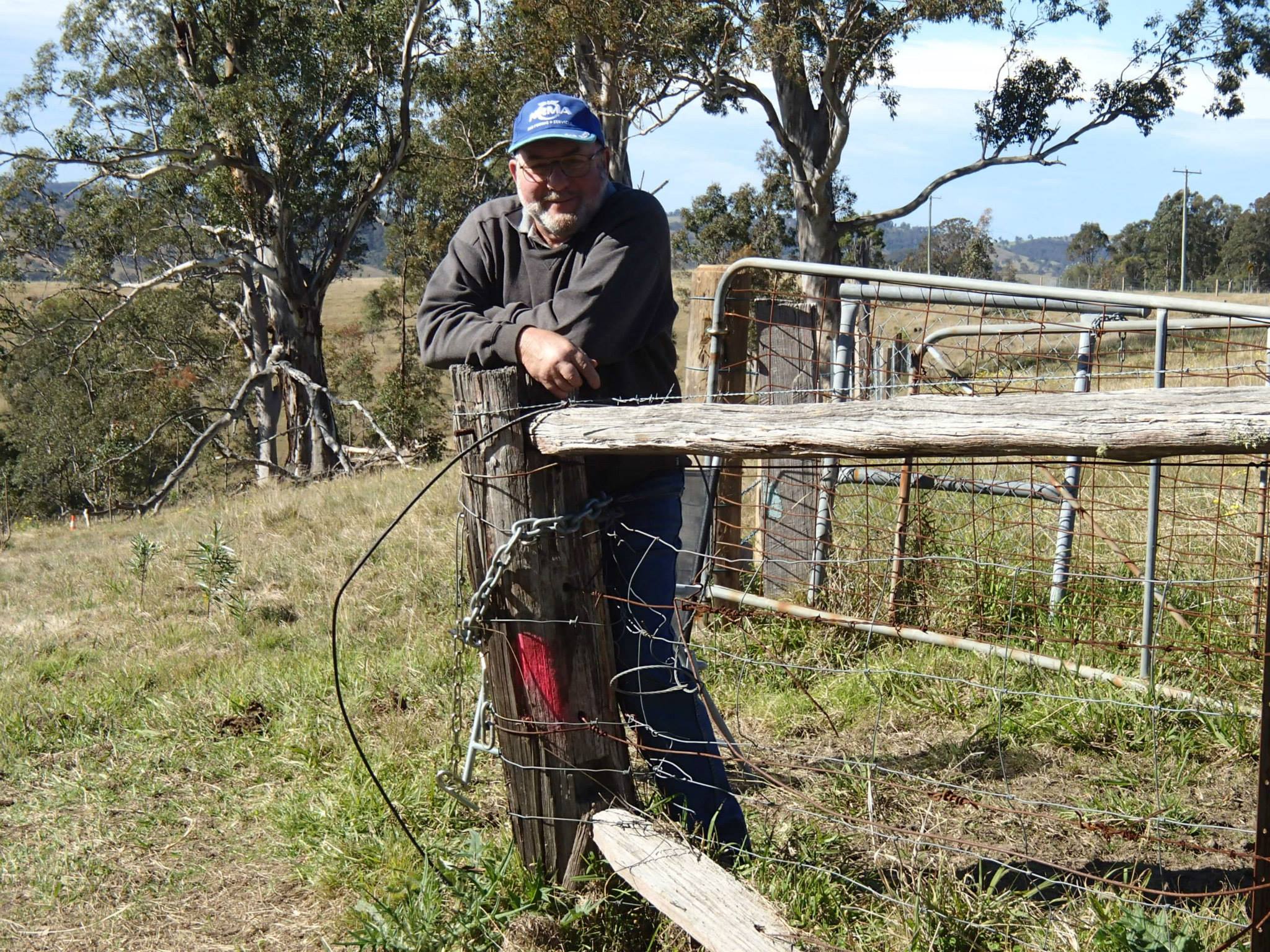 I took the first part of the race pretty easily, chatting with other runners along the way. Then one of my friends, who was doing the 12km said “You’re just doing the 6km?? You should be putting in more effort then. Get going!” Fair enough. So I gave it a bit more. Four kms into the race the Dawdlers split off from the Dashers and suddenly I was all by myself. I could see a man in the distance in front of me but no-one behind me. That’s when I thought that maybe there were not many people doing the 6km and maybe I would have a  chance of getting a place in my age group! Woo! 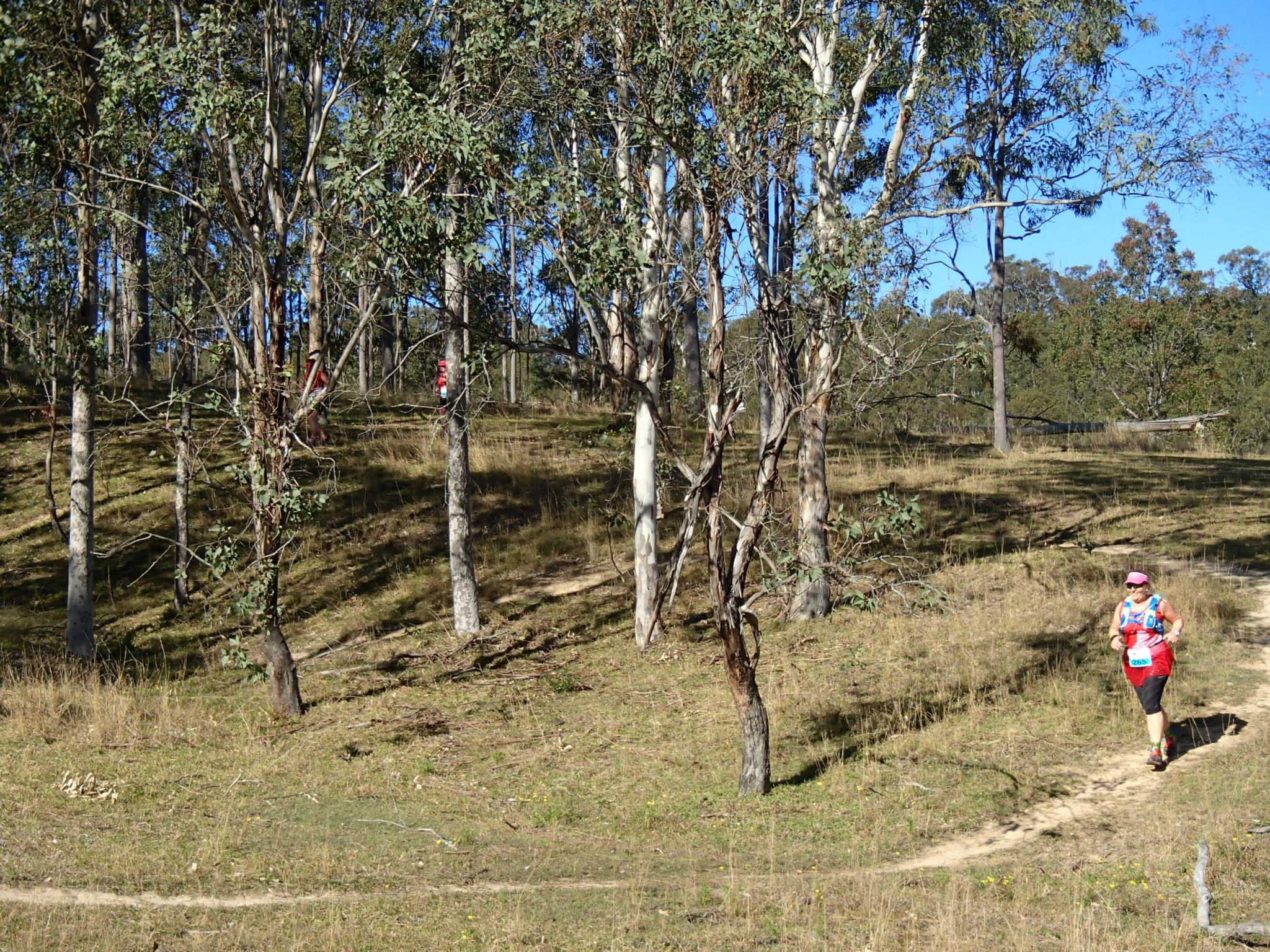 I reached a point a bit over 5km’s, a flat grassy stretch, when suddenly a woman overtook me. I was quite knackered by then and didn’t have the energy to catch her. Oh well, I won’t be first. Soon after, according to my Garmin I reached 6kms but there was no sign of the finish line. It ended up being about 6.8kms. But then maybe that was due to all the cow-pat avoiding. It was also really difficult to see the trail sometimes as some of it was covered in bush, rocks etc so I did take a few slight wrong turns and had to back track a little. So it’s possible the extra distance was partly my own doing.

And then, up ahead, was the hill that won me the race. We would be going back down the steep hill we had climbed at the start. Now this hill was pretty rough. Steep, with the trail not particularly obvious and tree roots and rocks all over the place. The woman ahead of me hesitated (as probably most sane people should do) so I took advantage of her pause and overtook her.

I flew down that hill like I had all manner of ugly, angry, big-toothed beasts chasing me. There were infinite obstacles trying to trip me up. But I had an advantage. Downhill trail was kinda my thing. For a moment I was back in my favourite place, Glenrock State Conservation Area, hurtling down the rocky switchbacks. I was using this hill to get as much distance between myself and the other woman as possible.

At the bottom of the hill I crossed the muddy puddle (straight through it this time, I was in a rush), ran straight through the cow pats, dodged the cars that were parked in the wrong place, and entered the showground. As I did I heard the announcement “and here comes the first female in the 6km race…” WHAT?? Really?? Well this was exciting.

There was still a 400m lap of the showground to go before the finish line and I can tell you it was the longest, hardest 400m I had run in my life! I had no idea how far behind me the other runner was so I couldn’t take any chances. This was my chance to make history! Then a moment before I thought my heart and lungs might explode, I crossed the finish line! 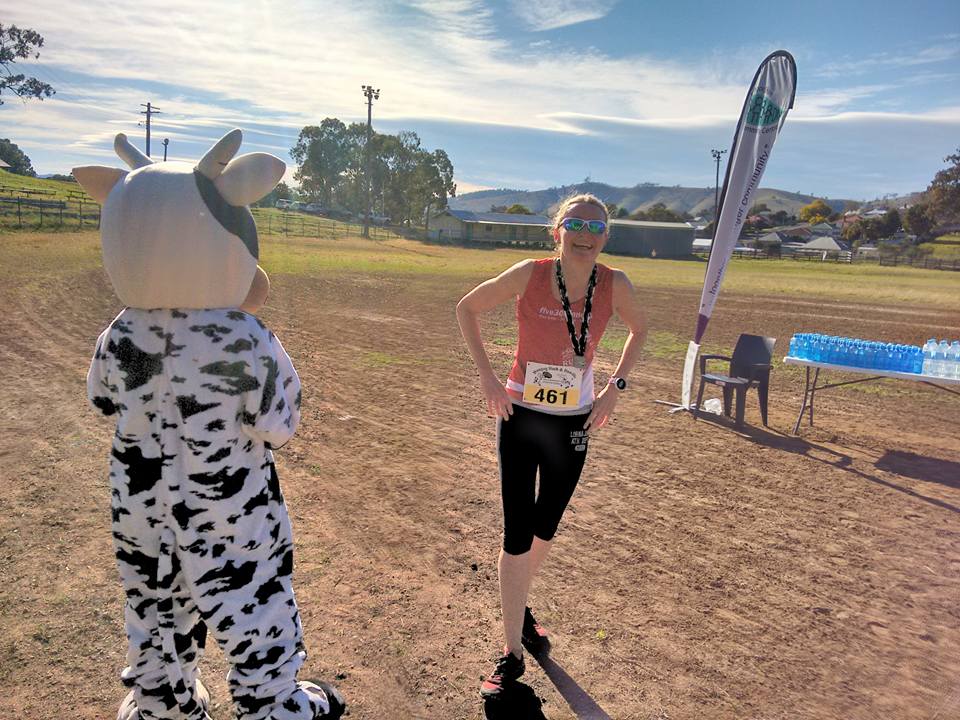 To the cheers of approximately four people.

Well, the other races hadn’t finished yet and the spectators were perhaps drinking coffee somewhere (let’s be honest, the 6km Dawdle is probably not the highlight of the event).

So the secret to my success?? Apart from a little skill in running down rocky hills, my success was due to the simple fact that short events are often thought to be for inexperienced runners. Or walkers. Or kids. Most good runners do longer events. Well, they didn’t get a movie voucher and a special winner’s handshake from the cow, did they??

Below: Fast runners. Did the longer events. Didn’t get movie voucher or special winner’s handshake from cow. Oh, except for the dude in orange. He won the half. Show off. His prize was a dunny. 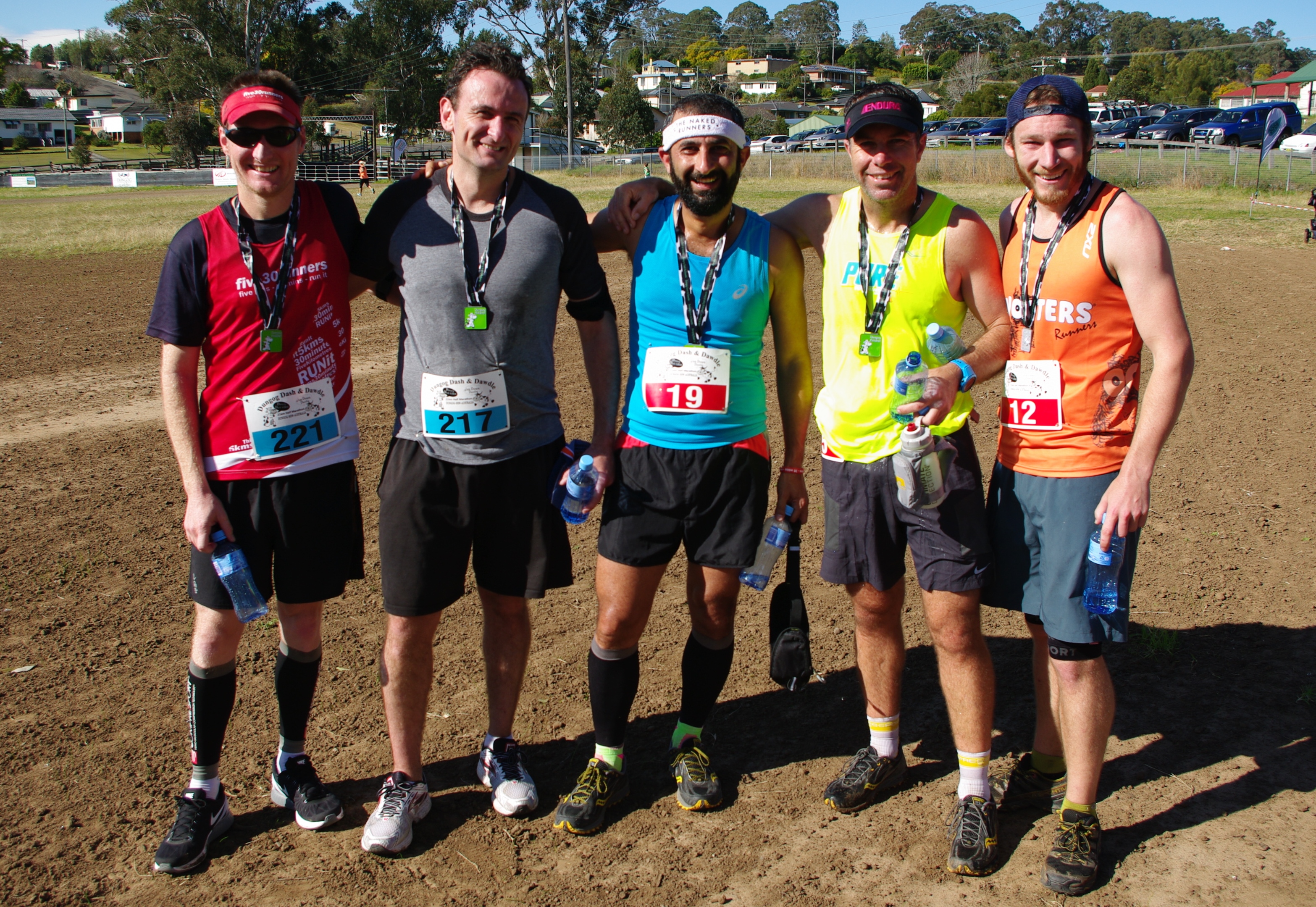 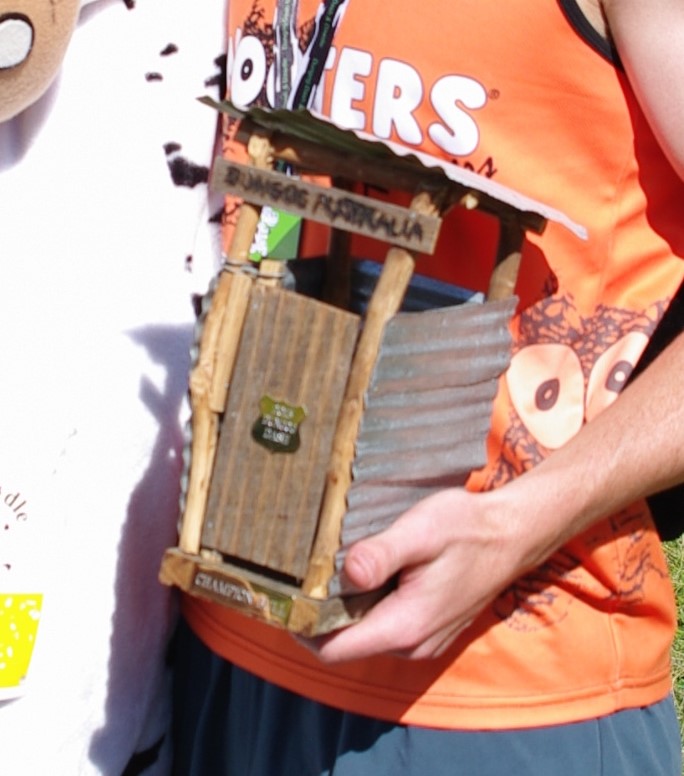 When you are finished running there are drinks and hot breakfasts to be had. Delicious sausage sandwiches or egg and bacon rolls. All proceeds again going to the Community Centre. Oh goody! An excuse to have two!

WAIT!! Did I mention the medal??? It is in fact the reason that many runners actually do this race. The coolest medal around! 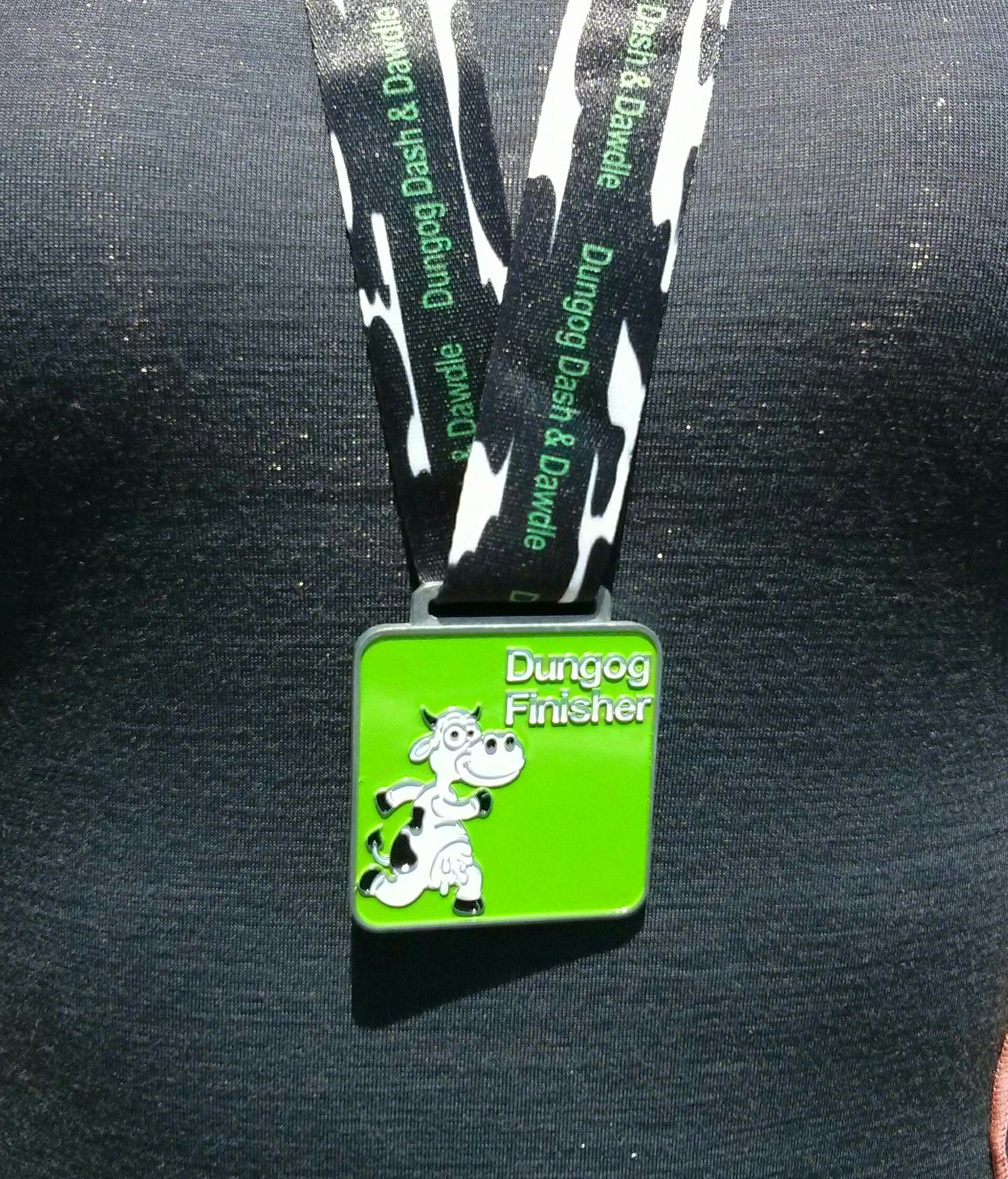 So my final conclusion on the Dungog Dash & Dawdle…

You don’t go in these types of runs to get a PB. Like many small town runs, especially trail runs, the distances aren’t always accurate, the runs may not start on time, the hills and obstacles are scary, and you may very well take a wrong turn here or there. But the surroundings are beautiful, the terrain is tough but varied and interesting, the hills make you strong, and the organisers are friendly, hardworking and doing it for their community. What’s not to like about that!

I loved it and I’ll definitely be back next year!!

The Dungog Dash & Dawdle for 2016 is on Sunday the 7th of August.  Register here or check their facebook page here for updates.