I thought it might just be a bit of a gimmick calling it the Galston “Gut Buster”. Like they were trying to make it sound tougher than it actually was. But I think they got it right. I don’t know about everyone else but I certainly felt like I was busting my gut at some points. Dodging rocks, tree roots and low-hanging branches, clambering over boulders and scaling steep rock faces, and then hauling your weary legs up the nasty set of stairs in the last kilometre… It certainly wasn’t for the faint-hearted. Needless to say, I loved it! (Not all the time mind you, certainly not while I was climbing those rotten stairs. But afterwards, when I was flopped down on the grass at the finish line, I thought it was the best thing ever!)

The Gut Buster was a last minute registration for me. I had never even heard of it until some friends told me they were going along. I’m very glad I went, because I have to say, I’m a bit smitten now 🙂 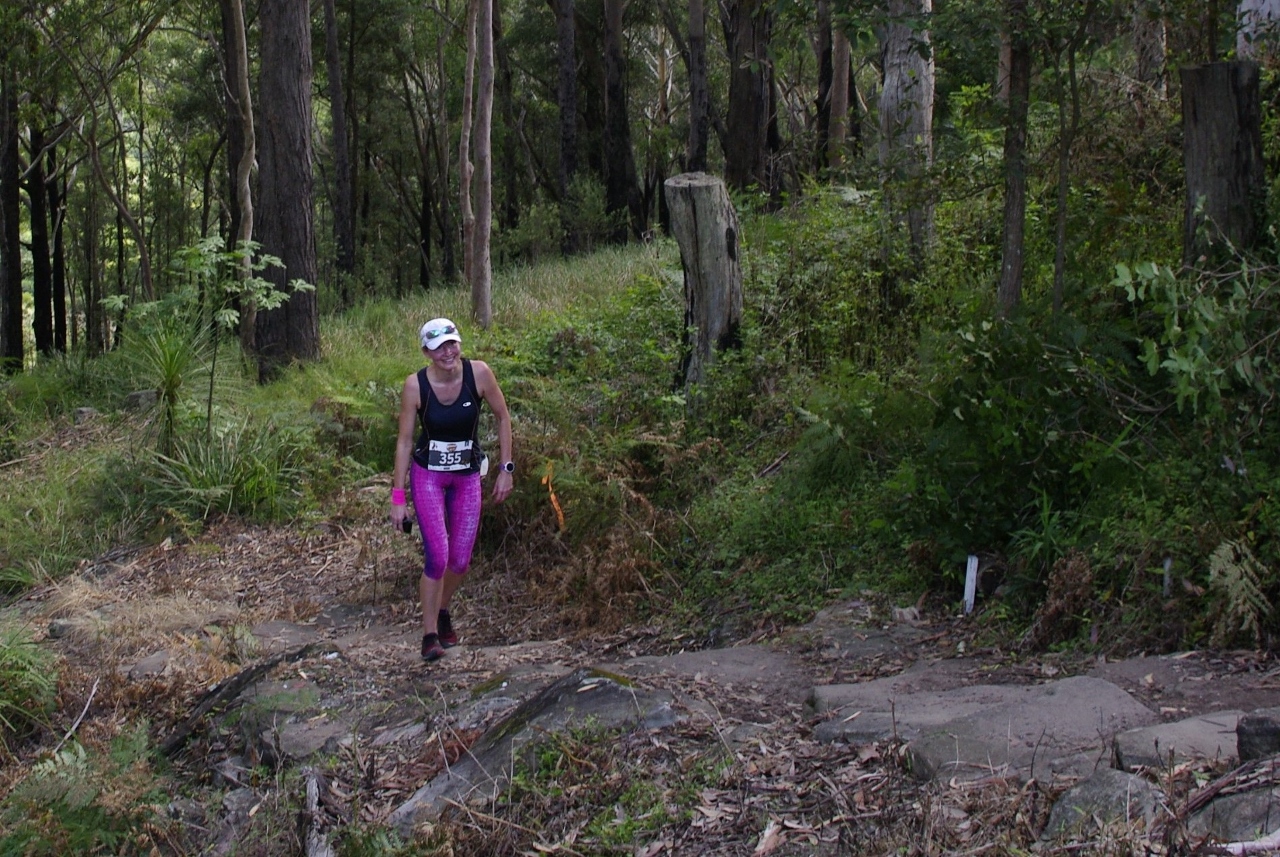 Now in it’s third year, the Galston Gut Buster offers an 8 kilometre run and a half marathon through the very scenic Berowra Valley National Park. The organisers are very community minded, supporting several local independent businesses and raising money for local charities. This year $5 of every race entry went to the Hornsby / Kuringai Homeless Women’s Shelter. Love a run with a good cause!

The location of the Gut Buster is super convenient, starting near the centre of town in Hornsby. It is only 30 kilometres from Sydney, or if you don’t mind getting up before sparrow’s fart, then you can take the 1 hour and 45 minute drive down from Newcastle, like I did. The race starts in Hornsby Park, right next to the Hornsby Aquatic Centre (where runners can swim for free after the race!)

As with any running event, there’s the usual anxious pre-race queue for the loos. This can sometimes take longer than the actual race. This time two of the porta-loos developed a slight issue and according to the sign, if you want to use them, you’d better make sure you know what you’re going to be doing once you’re in there.

Both events were kicking off at the same time. We seeded ourselves at the start line and as I was doing the 8k I stood in front of the “8km – sub 1:20” sign. Seems about right. But I was a bit worried seeing these fit looking fellas just in front of me. Usually the fit looking men are nowhere near me at the starting line. Is it harder than I have anticipated or are they having a slow one today? 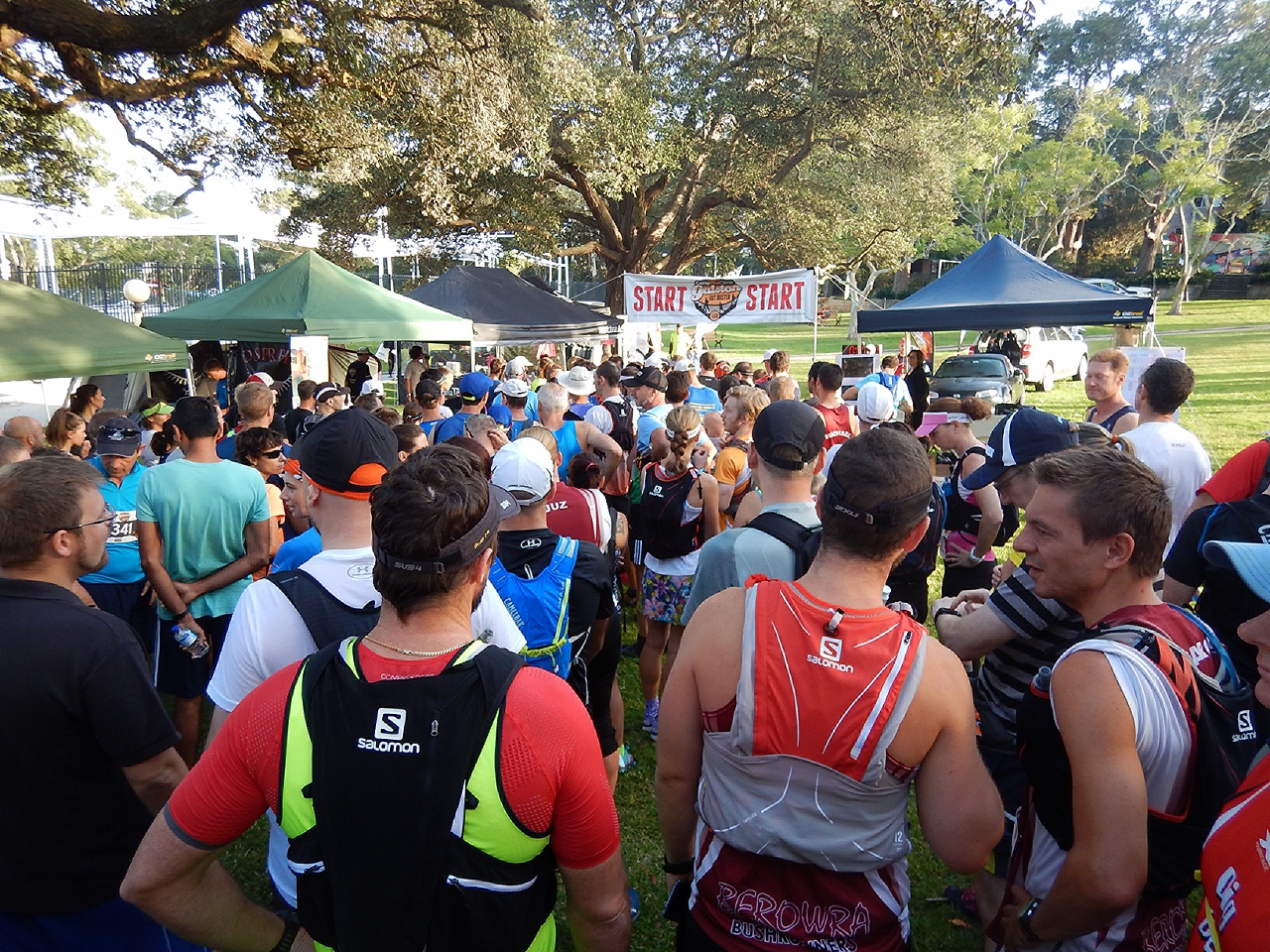 I had no time to dwell on it as the race had started and before I knew it I was off and running. They set us off in pairs every 5 seconds to try and space everyone out a bit. Running across the grass two by two, it was like we were heading for Noah’s Ark. And if the Ark is at the end of the run, well can I just say that it’s going to be an awfully smelly Ark once we’re all inside (runners are not known for their sweet scents).

Entering the bush, the first section of trail is down a big set of bush stairs called the Heritage Steps. Unfortunately despite the staggered start, there was quite a bottle-neck of runners on these stairs so I couldn’t take the downhills like a bull-at-a-gate like I normally would. You see, I’m quite slow on the uphills so I have to make an extra effort on the downhills.

Once we hit the bottom of the stairs we were able to spread out a bit. I was impressed to see they had a bit of on-course music. This time it was a young saxophonist. It’s one thing to have a band playing along the side of the road in runs like the City to Surf, but in trails runs? They often have to trek a fair way through the bush to get to their spot, then hang out by themselves for hours, relying only on the encouragement from the occasional runner to keep them going. Anyway, it’s great to be able to boogy to some music for a brief moment mid run. Any distraction is good! 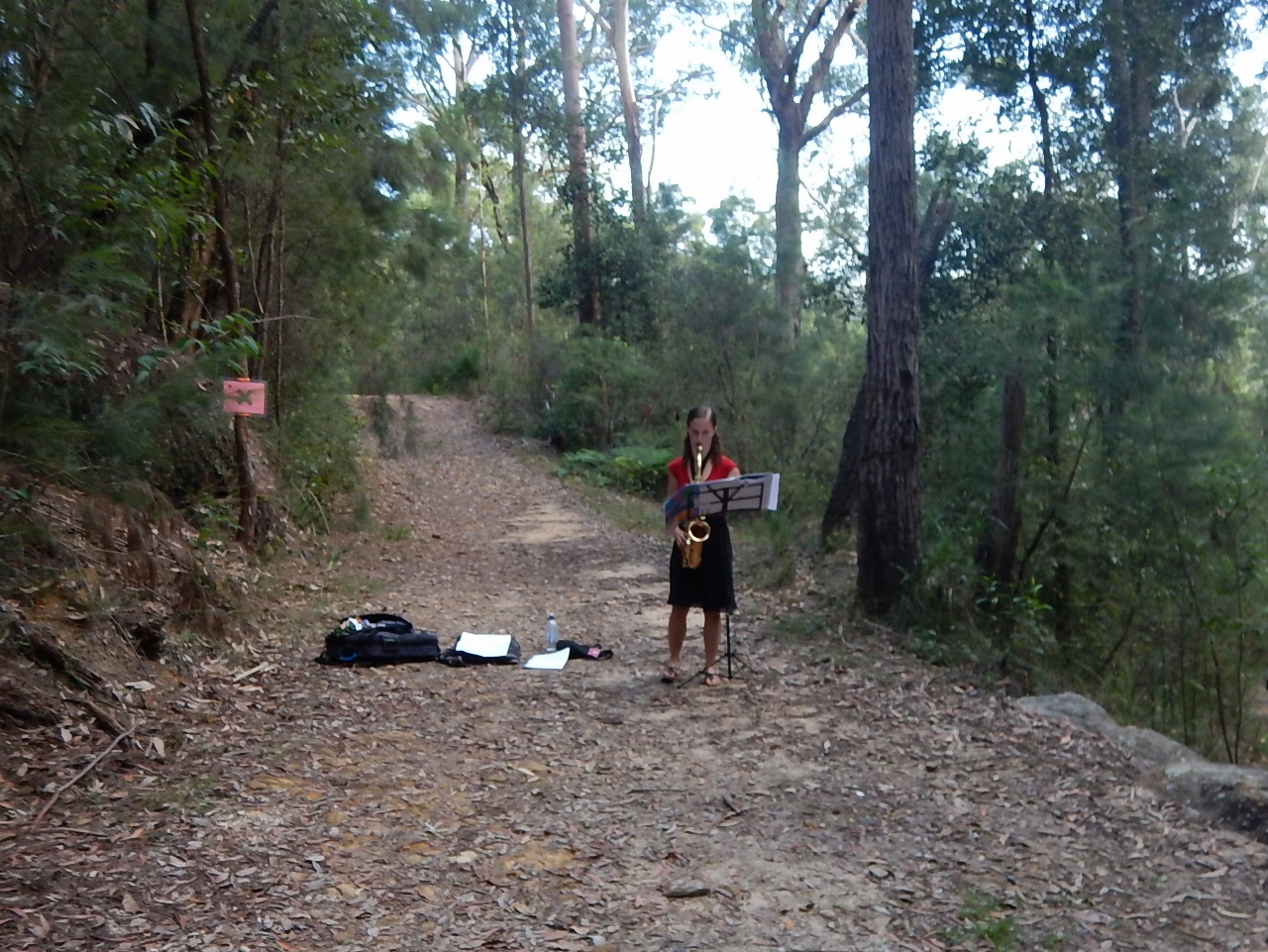 There are a couple of really pretty creek crossings on this run, but don’t worry, you won’t get your feet wet (not on the 8k anyway, can’t vouch for the half). At one crossing, you hop across the creek over some cool stepping stones, and one of them is at the very scenic “Washpools” (below). 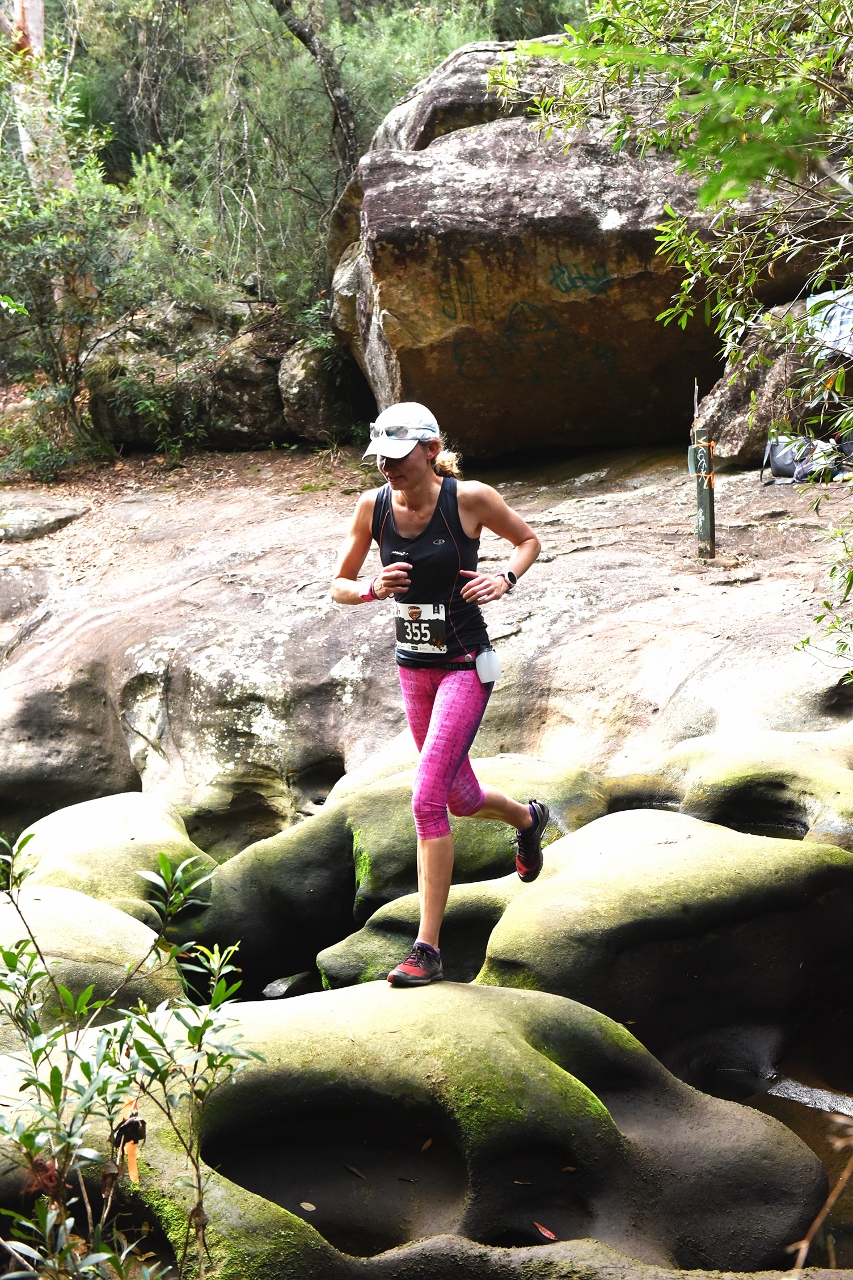 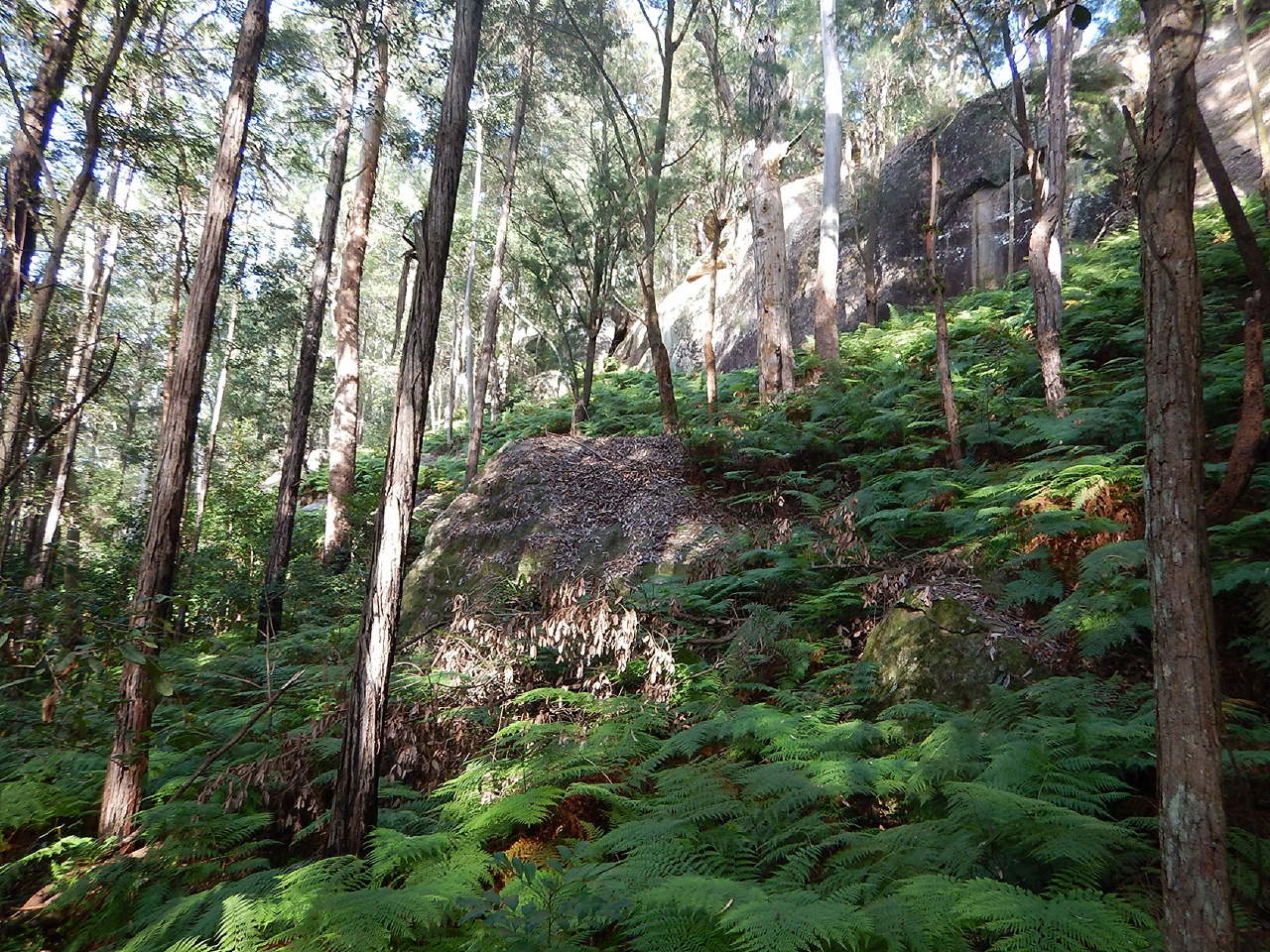 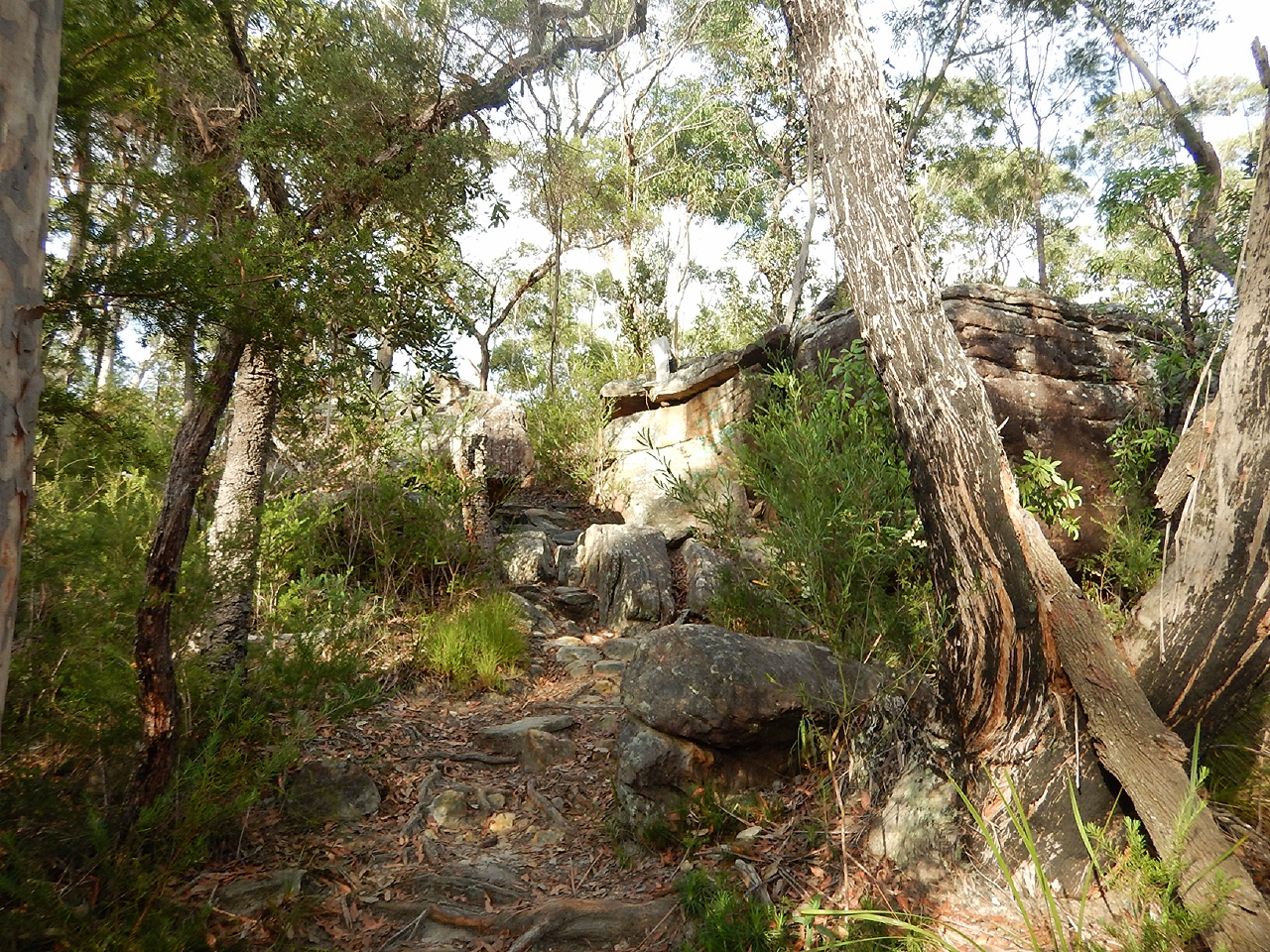 Going up a particularly steep and rocky section, suddenly there were runners coming in the opposite direction. I thought they were the half marathoners for some reason so when they started saying things like “nearly there”, “about 200m to go” I was like “200m to where??? You can’t fool me, I know I still have about 4.5kms to go”. Turns out these were my fellow 8km runners and they had reached the turnaround point at halfway and were heading back (I would have known there was a turnaround point if I had actually paid attention to the course map and race instructions…) The turnaround point was also at the top of quite a long grueling climb, so to get there was quite a relief, as you then had some lovely, lung-resting downhill to look forward to.

The turn-around point was at this beautiful lookout (that marshal must have put his dibs in first to get that sweet posi!) But no time for enjoying the view. Touch the tree stump, turn around and keep on running. 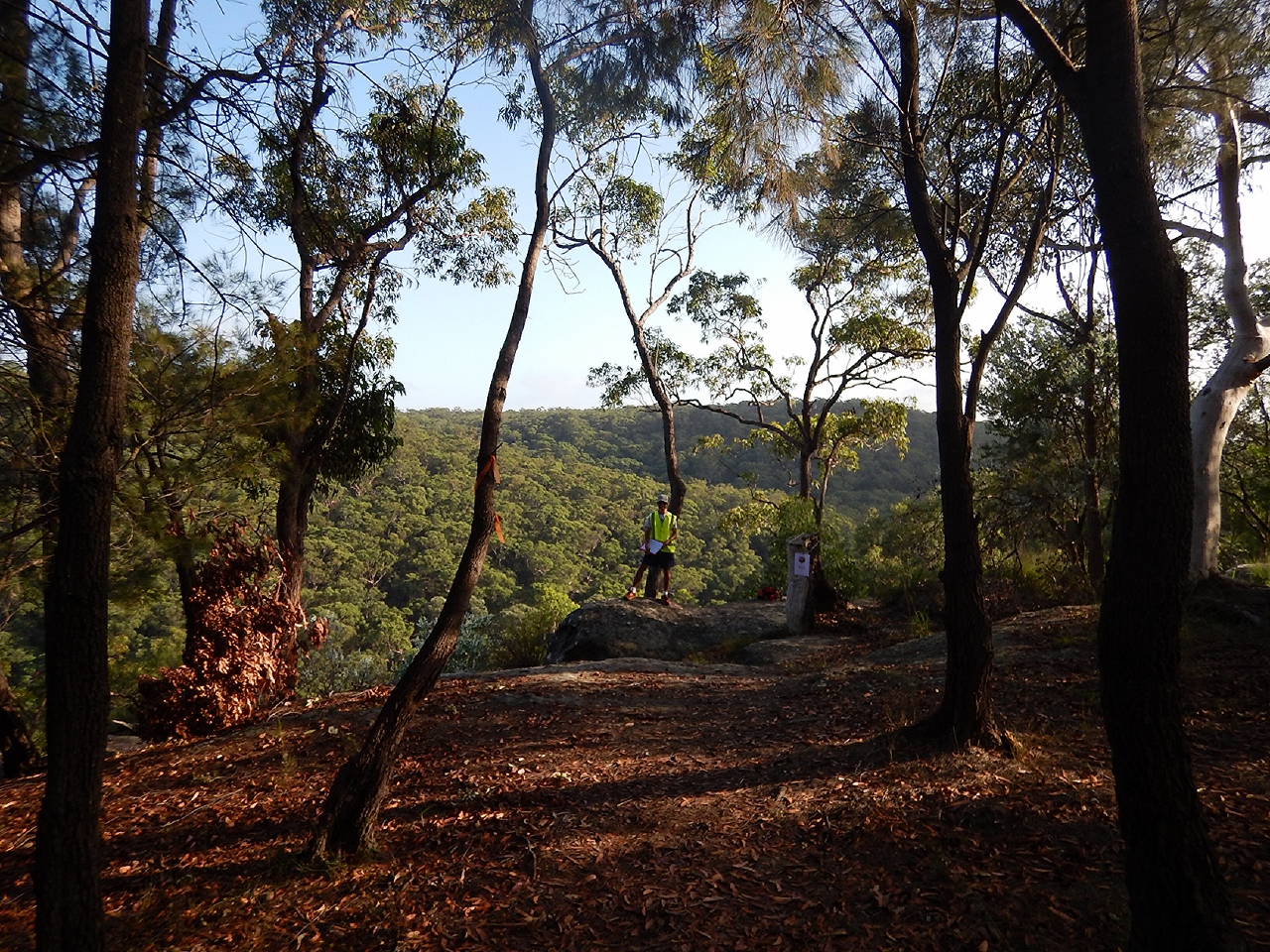 Well, apparently there was enough time to take some photos, have a quick chat to the lovely aid station volunteers and pose for a photo myself before I decided I’d better get going again. 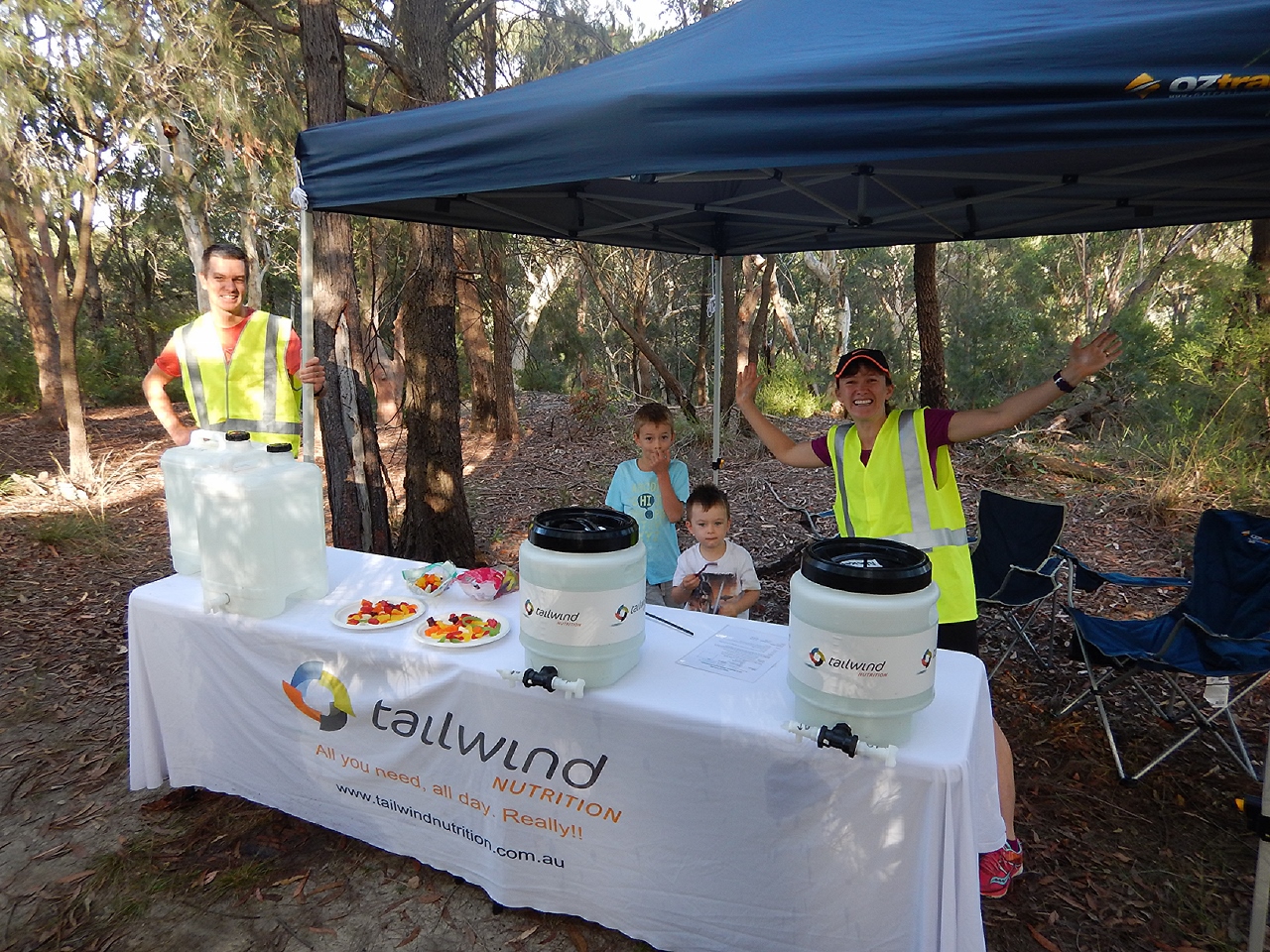 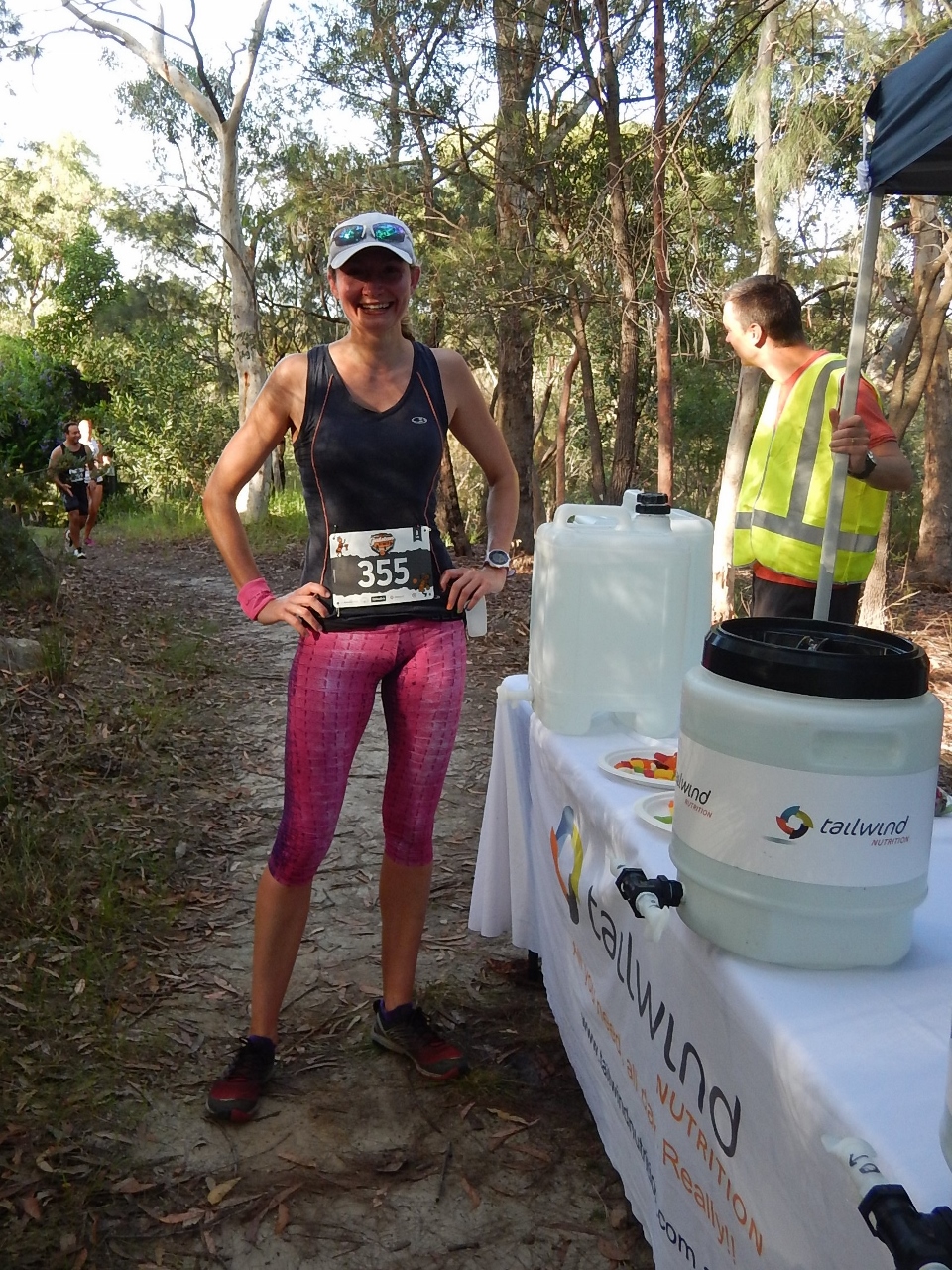 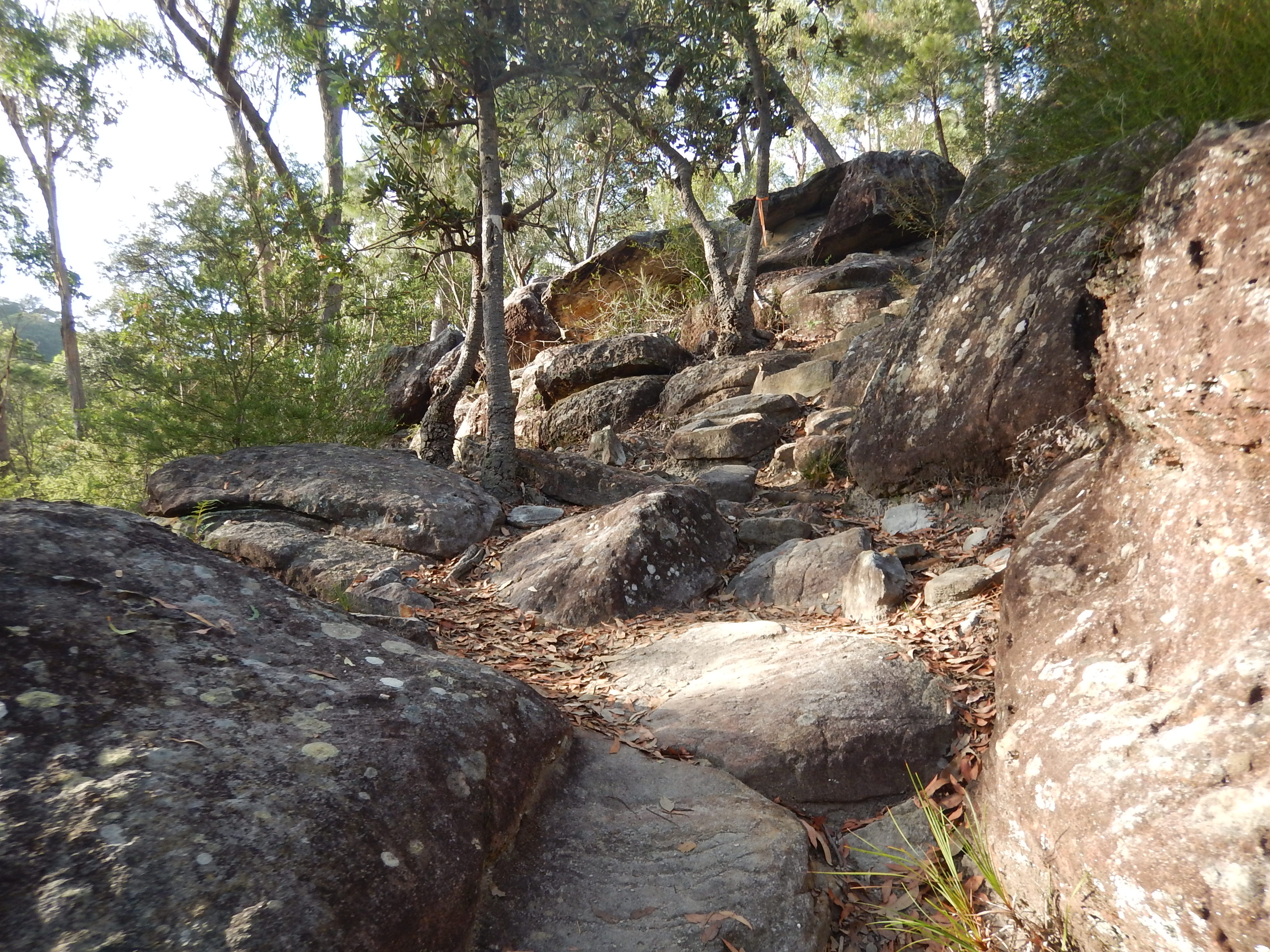 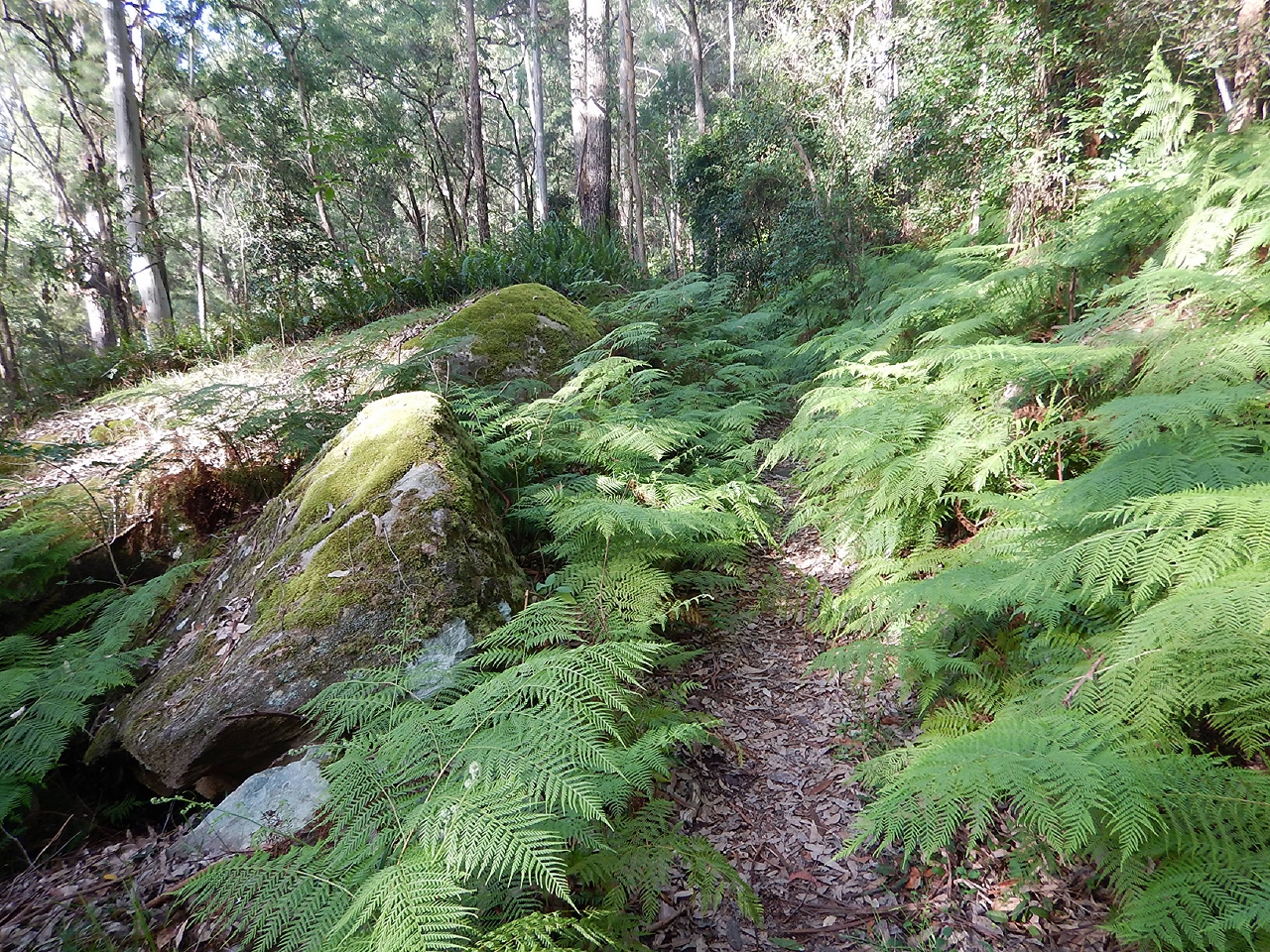 In the last kilometre we had to go back up that massive set of stairs we came down at the start. They slowed most people to a weary walk. Unfortunately the boy who was marshal at the bottom of the stairs declined my kind offer of letting him piggy-back me to the top. Drats! It’s just evil really, to have these stairs right at the end of a race. I pitied the poor Half Marathoners who had to face these after 20 hard kilometres. 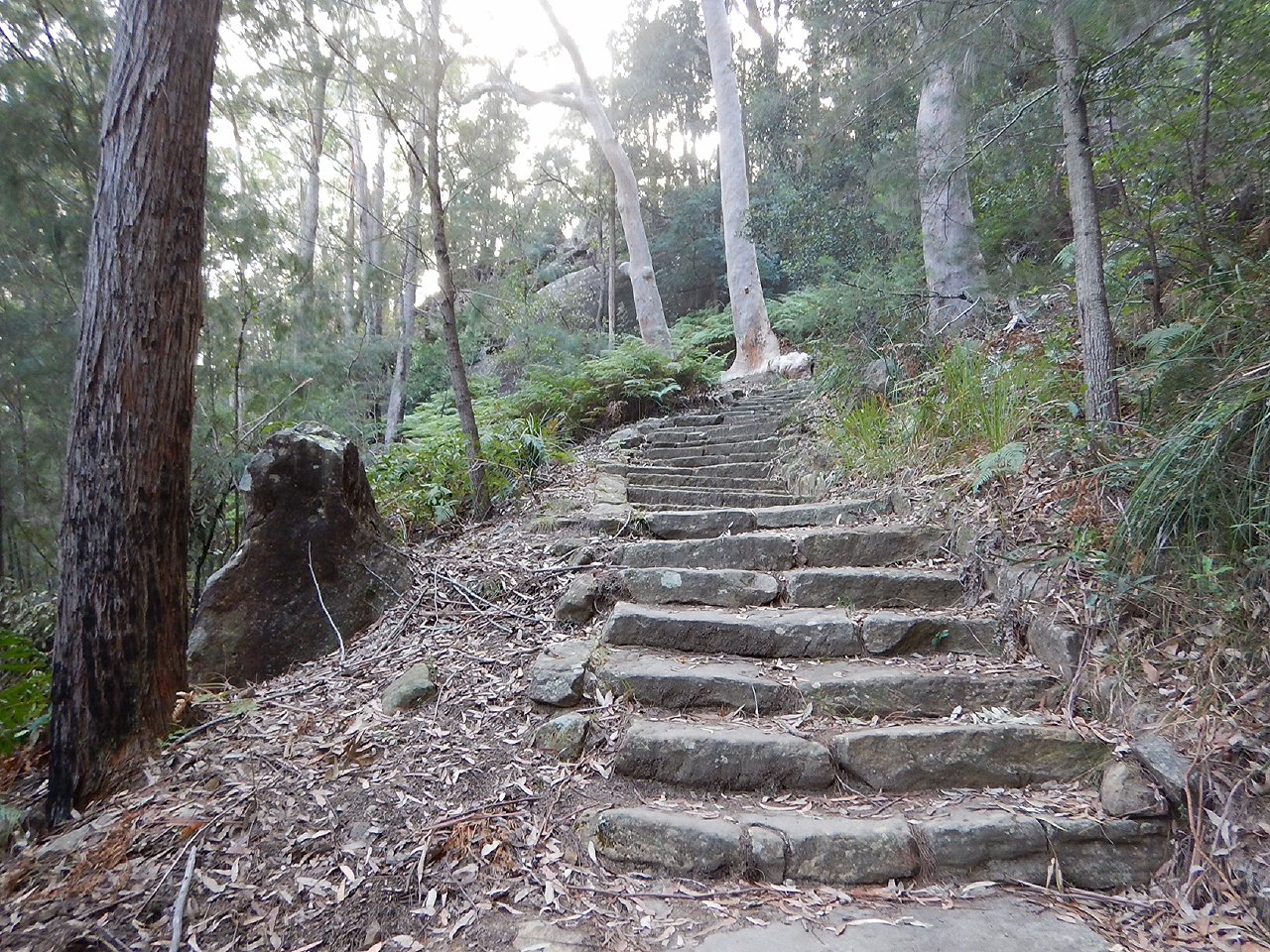 And if you like your race photos, well the Gut Buster does photos really well! Photographers are in several positions out on course including the very scenic Washpools. They even warn you when you are nearing a photographer so you can smooth back your sweaty hair, wipe the drool and snot from your face and put on your best “I’m-really-bloody-hurting-but-must-look-good-in-my-race-photo” smile (I’m still working on that one…) 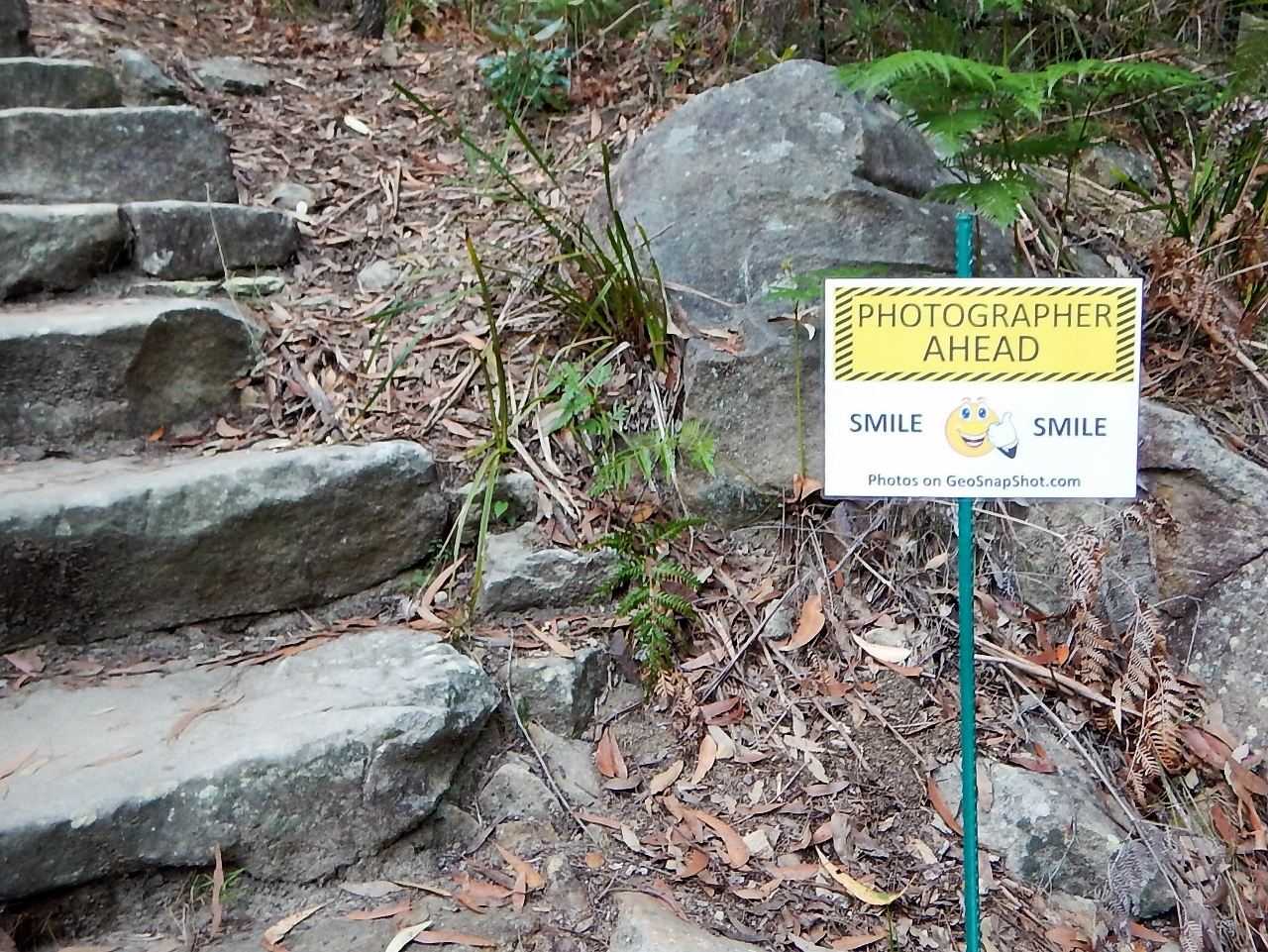 And then that gloriously sweet finish line appears and you use your remaining strength to sprint across the grass to the finish (pretending you’ve been running that fast all along of course).

The 8k race had about 337m of elevation. 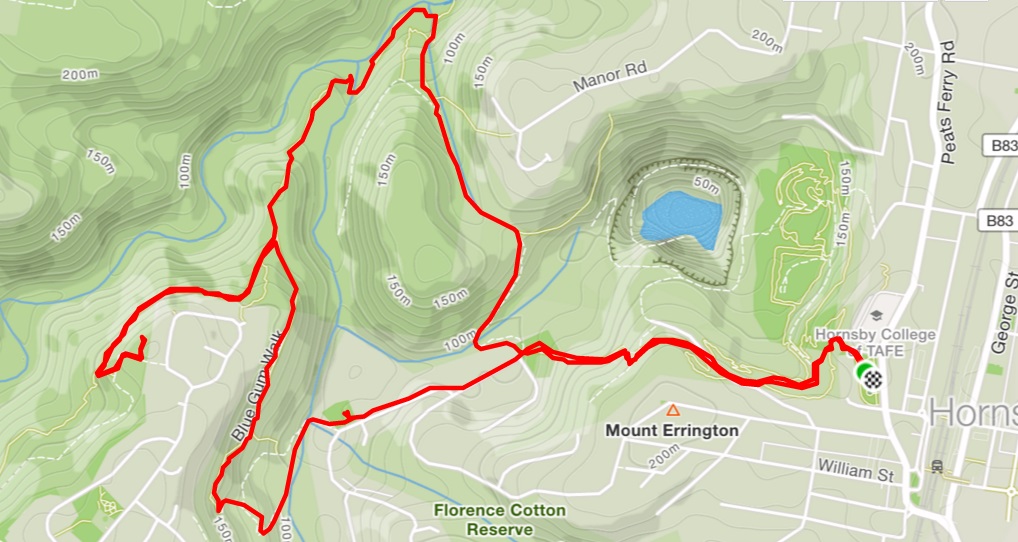 And the half marathon has a mighty 850m of elevation!! According to some sources (my friends) it is one of the toughest half marathons around! 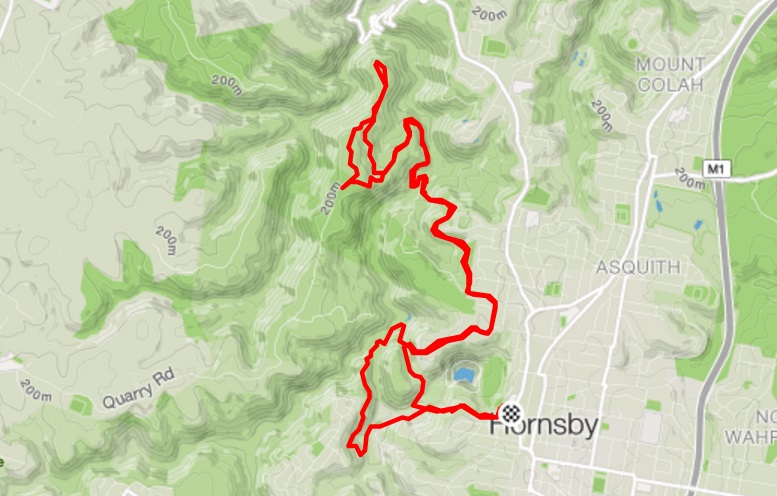 This run was one of the more scenic ones I have done. And because of the toughness, the sense of accomplishment you feel when you finish is that much greater. As I said at the start, I’m a bit smitten. So I’ll be back next year! 🙂 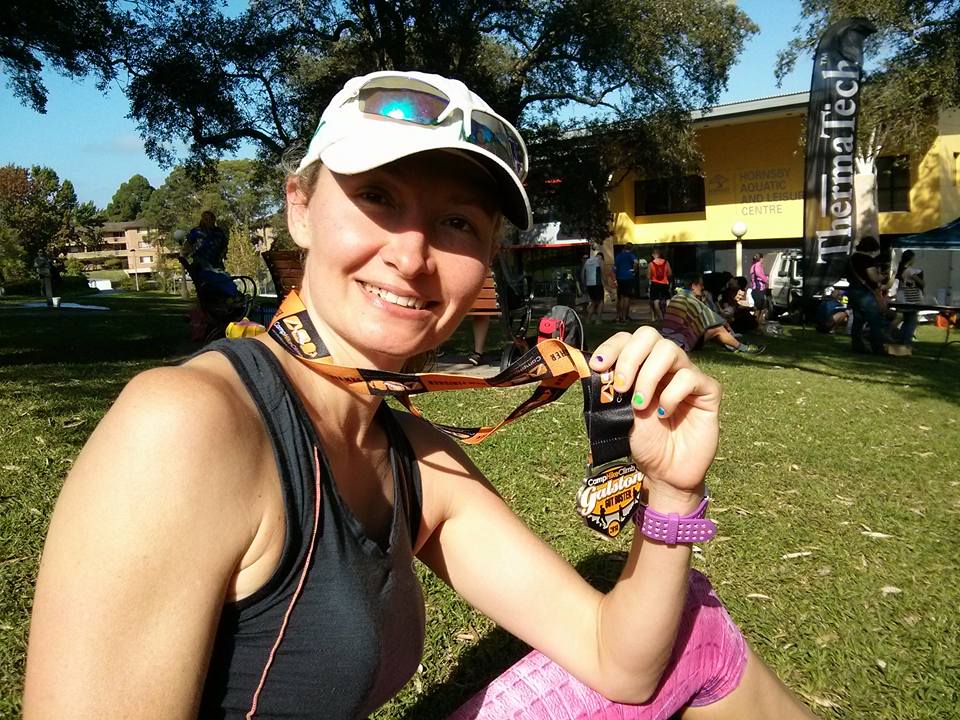 The Galston Gut Buster is in early April. Keep an eye on their website here for the details of next years run.