I’m a sucker for ice and snow. So it should be no surprise that Antarctica has been high on my travel hit-list for a long time. I could have gone there the way most people do, by cruise from South America, but I stumbled upon an opportunity that would get me a whole different experience. I applied for, and won a place in, the Postgraduate Certificate in Antarctic Studies, run by the University of Canterbury in Christchurch, New Zealand. The course would include a three week field trip to Antarctica. I would get my Antarctica trip and some education. Nice little package for a nerd like me.

The course was four months full-time over the summer, so I took that time off work and travelled across the ditch to Kiwi Land. 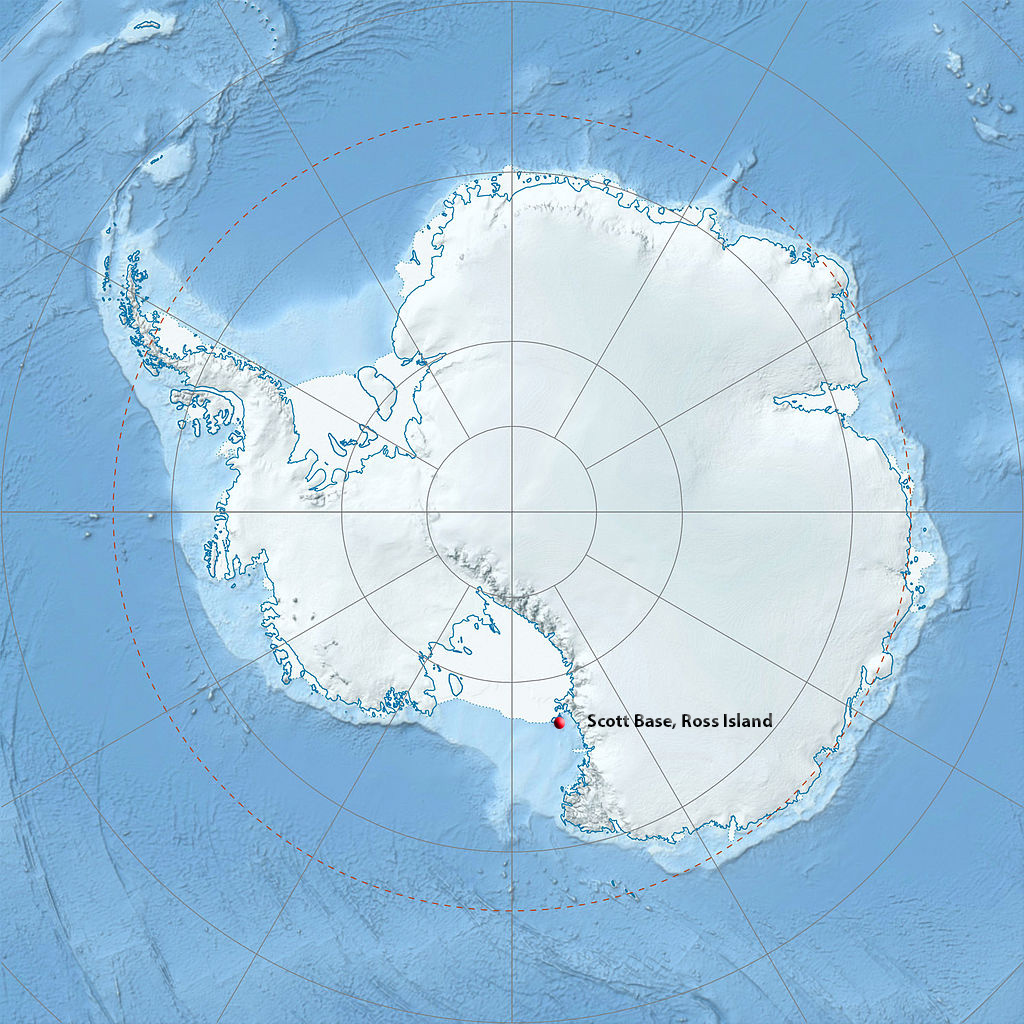 We headed out to Antarctica at the end of January 2014. Our destination was Scott Base, a research facility operated by New Zealand. Because Scott Base is just down the road from the American base McMurdo, we would be flying to “The Ice” with the Americans on board a US Air Force Hercules LC-130. We were originally supposed to go in the much larger C-17, but they were experiencing higher than average temperatures in that part of Antarctica and the runway was starting to melt. Instead we flew in the smaller LC-130, whose lighter weight and retractable skis meant it was better equipped to land on unstable terrain such as snow and ice.

The extreme and unpredictable weather of Antarctica means that flights there are commonly delayed. We were warned in advance that our flight may be delayed by many hours or even many days. Even after take off, there is no guarantee you’ll be landing in Antarctica. While you are in the air, the weather on the Ice may turn ugly, in which case the plane will do a U-turn and head back to Christchurch. There is a point of no return however, about three quarters of the way there, where the plane does not have enough fuel to get back to Christchurch, so after this point it must continue to Antarctica, no matter the conditions. The flight is around 8 hours so it would really suck to be turned around at the last possible moment. Potentially 12 hours in the air, only to land back where you took off from. Yuck! But better than landing in Antarctica during a blizzard I guess… 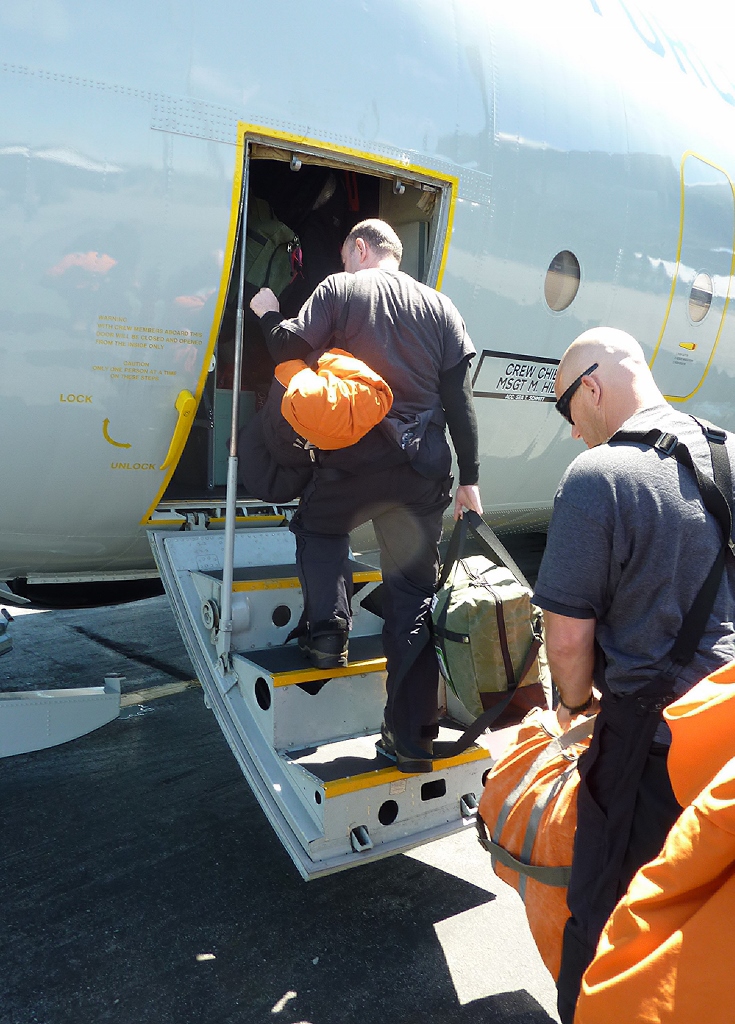 Luckily we flew out on schedule. Unluckily we were forced to turn back just 20 minutes later. Not because of weather, but because there was a strange noise coming from the engine. However it was only a two hour wait until we were back in the air on another Hercules. 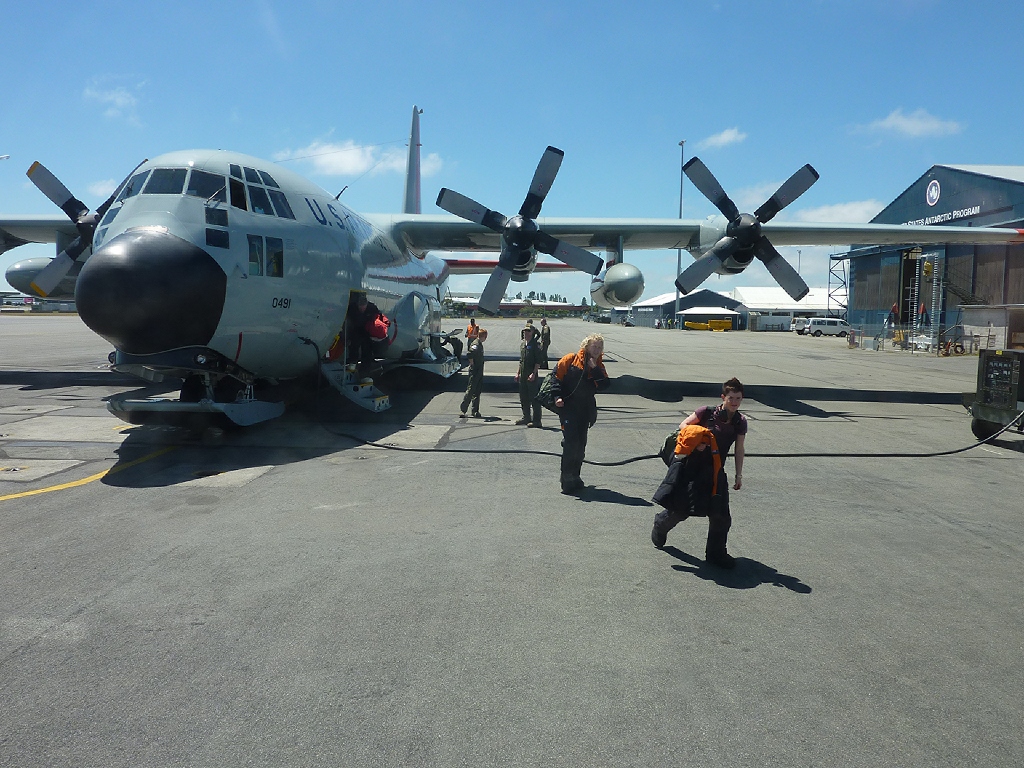 These planes are not built for passenger comfort, not one bit. They are designed more for carrying cargo. You sit side by side on cargo netting and if you are in one of the narrower aisles, your knees are touching the knees of the person opposite. There is barely room to walk along the aisles and this was not helped by the fact that we were all wearing our massive cold-weather boots. If you needed to go to the bathroom you had to gingerly step between all the feet. With those boots it was like an elephant trying to step into a teacup! If anybody was sleeping, they were inevitably woken by you stepping on their foot, kicking their knee or grabbing hold of their shoulder when you lost balance. 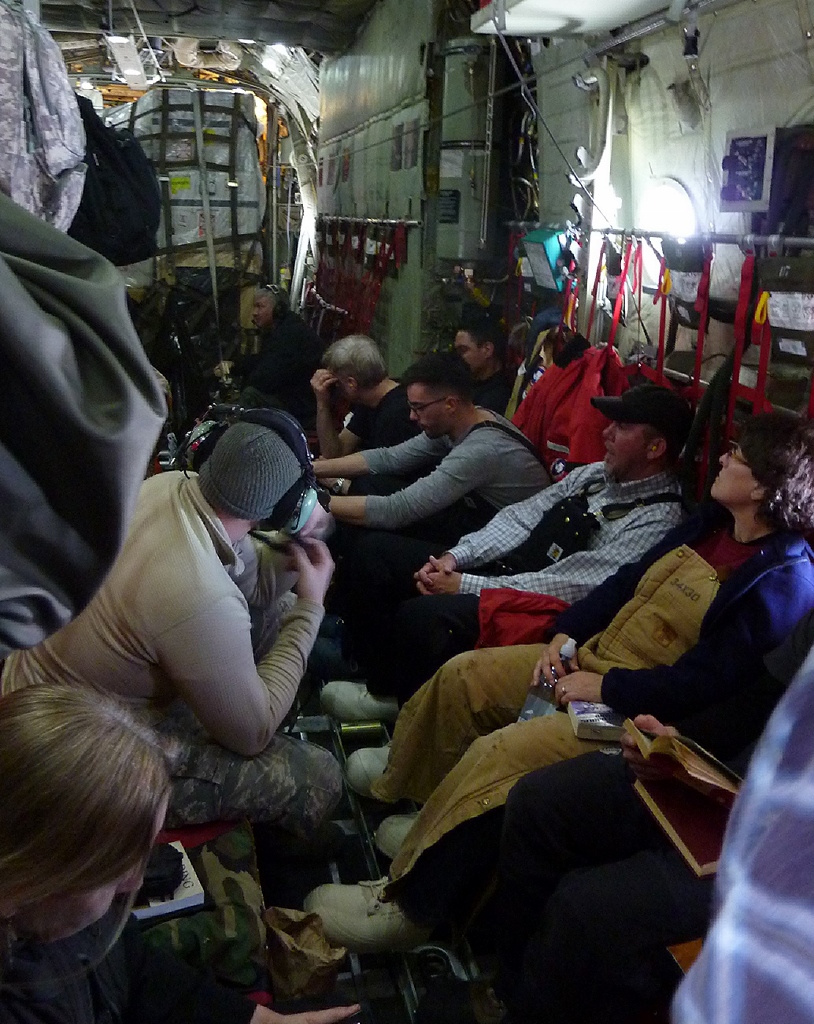 If you were lucky you had cargo in front of you, so slightly more leg room. I was not one of the lucky ones. 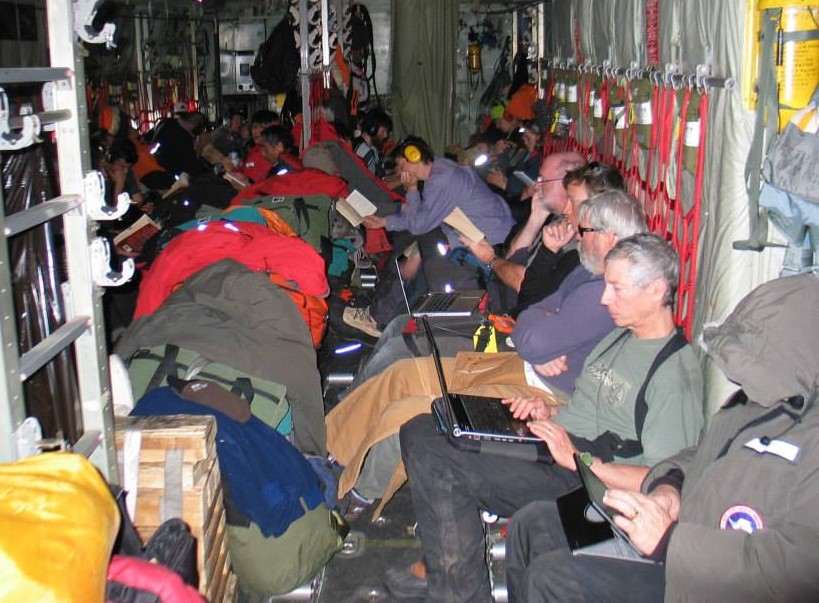 Those planes are loud. Really loud! And not just outside. We were required to wear ear plugs and/or head phones for the entire flight (which meant no talking to anyone. On an 8-hour flight. Eeek!). The temperature in there was quite variable as well. One minute it was searing hot, the next freezing cold. So one minute we were tucked inside our big warm jackets, the next we were using them as cushions, to ease the pressure of the cargo netting on our poor, uncomfortable bums. 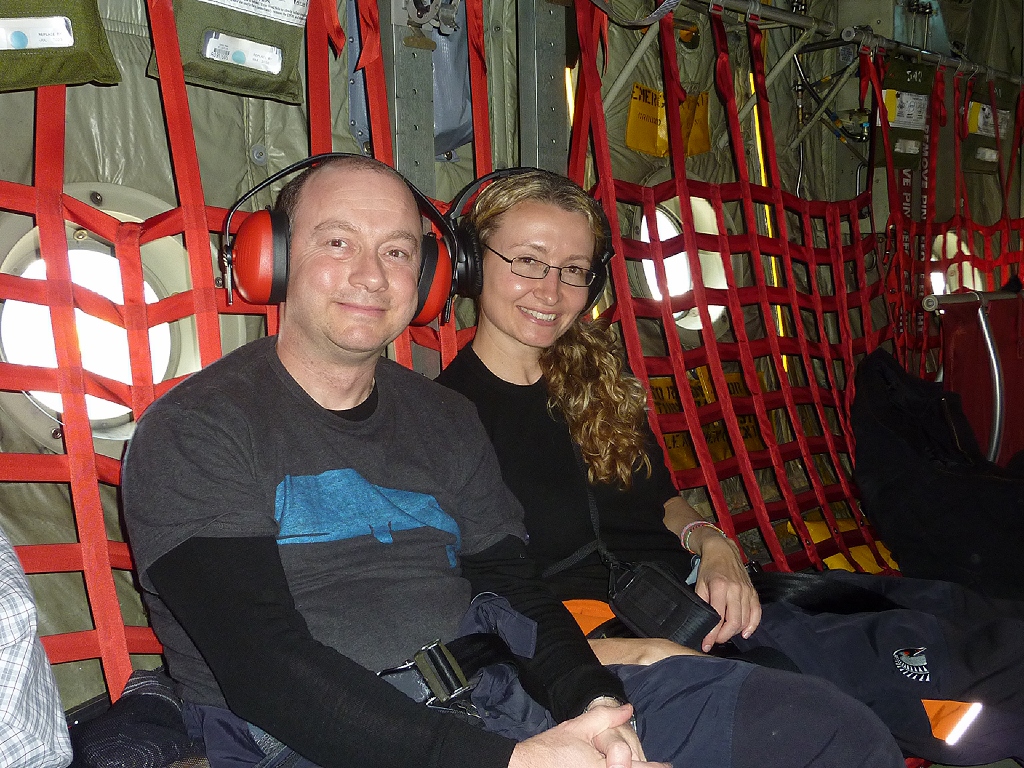 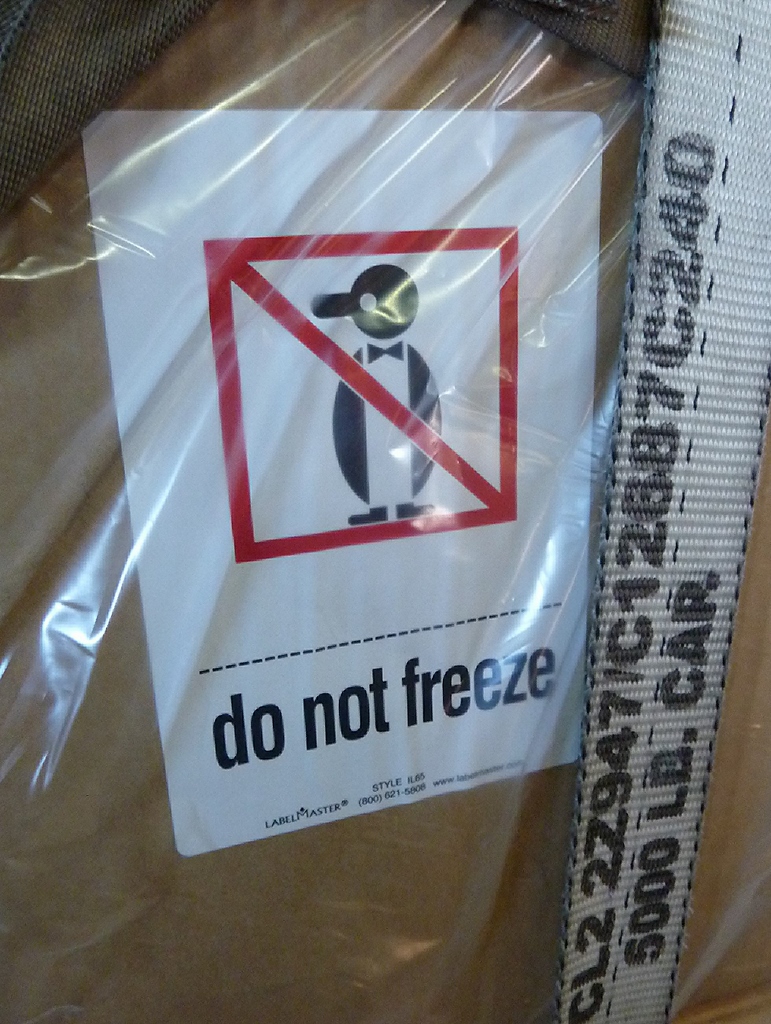 Penguins with bowties are not allowed…

Lunch was served in brown paper bags. Sandwiches, water and various snacks. No tray tables in sight but it was quite decent as far as airline food goes! 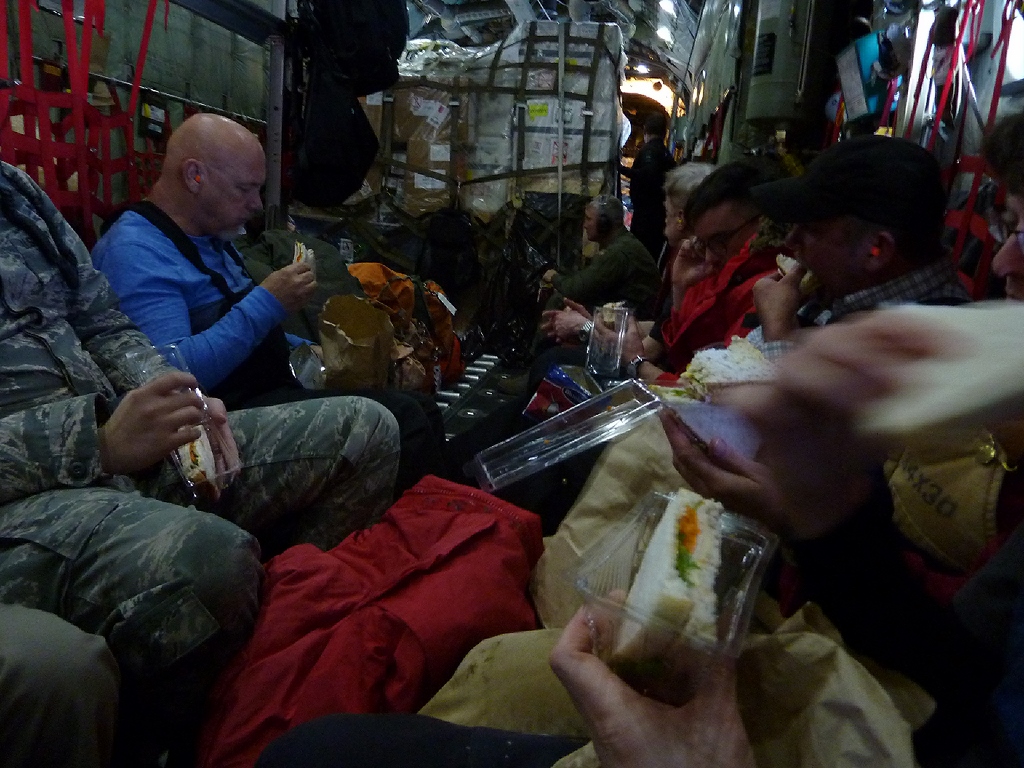 The plane was not designed with the passenger’s viewing pleasure in mind. The windows were few and far between, and very small.

The bathrooms were quite basic. There was a urinal up the front, covered by a floor-to-ceiling curtain. There was no room, basin, mirror or anything like that, literally just the urinal stuck to the front wall of the cabin. The sit-down toilet was down the back, again just covered by a curtain. The only way you knew if somebody was in there was to see if there was a pair of boots sticking out the bottom. 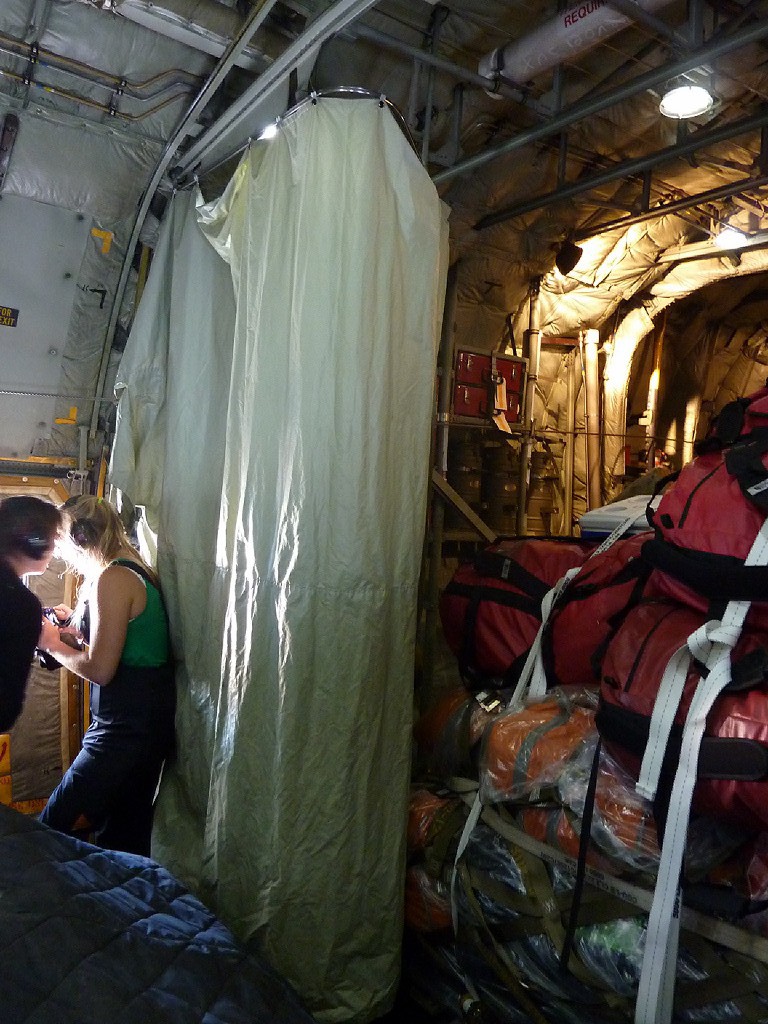 Despite my whinging about the discomforts of the flight, I was absolutely loving it! This was nothing I’d experienced before. It was a real adventure!

We were as excited as children when we were allowed to visit the cockpit. 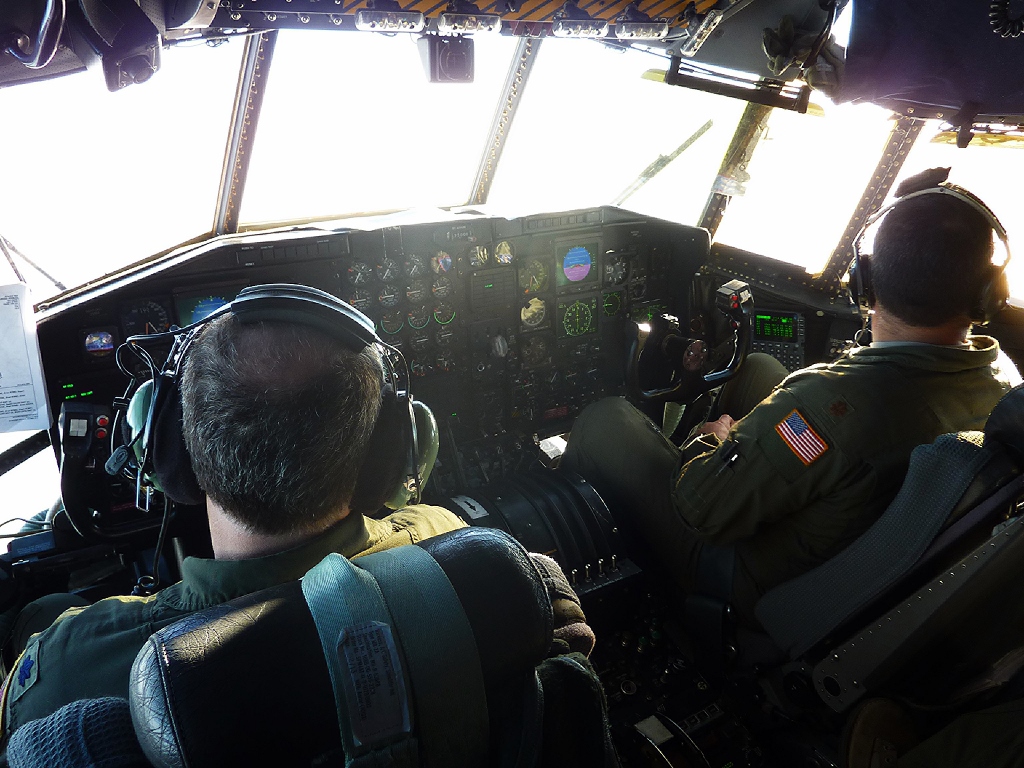 We realised pretty quickly the best place to be was up the back with the cargo. Not only was there a little bit of room to walk around, there were bigger windows to look out of. 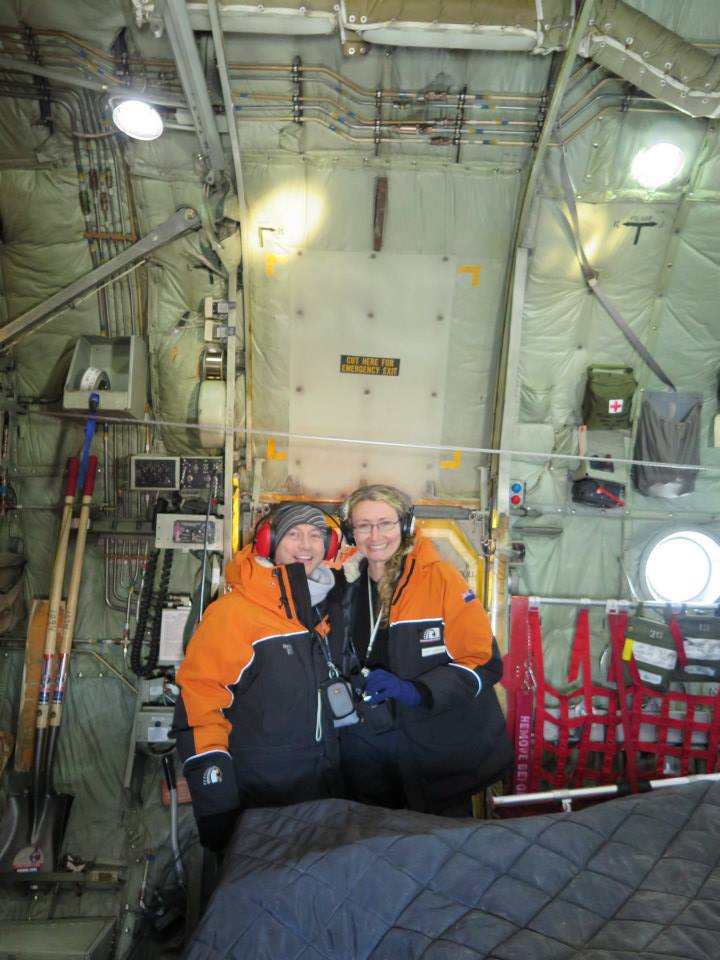 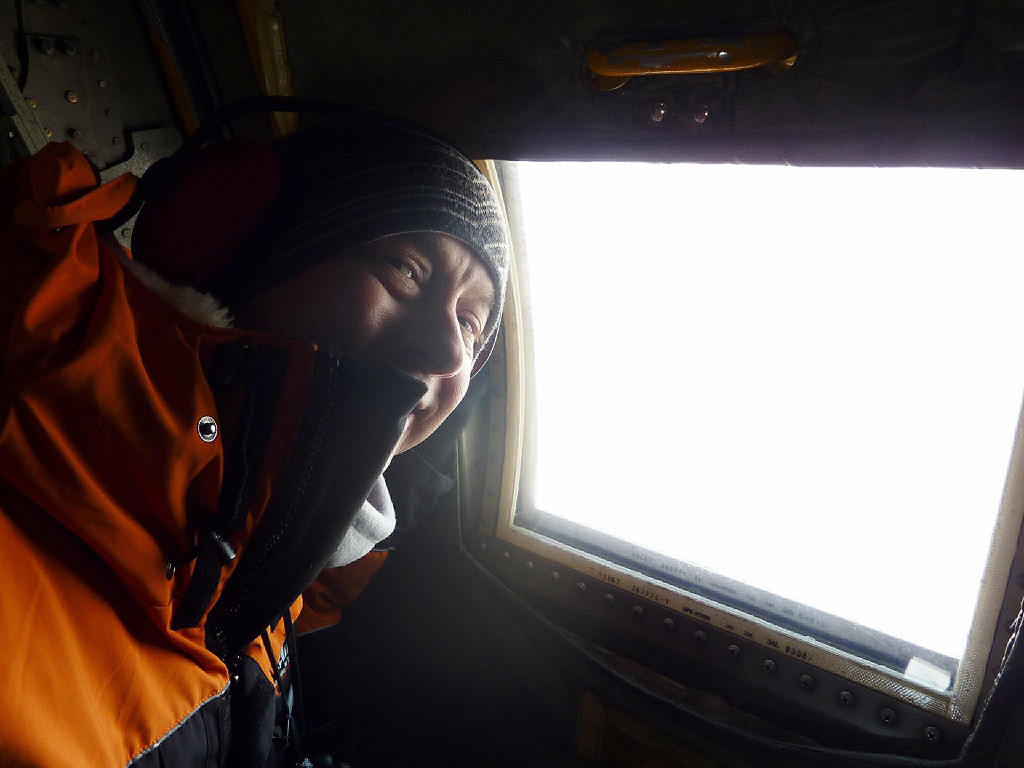 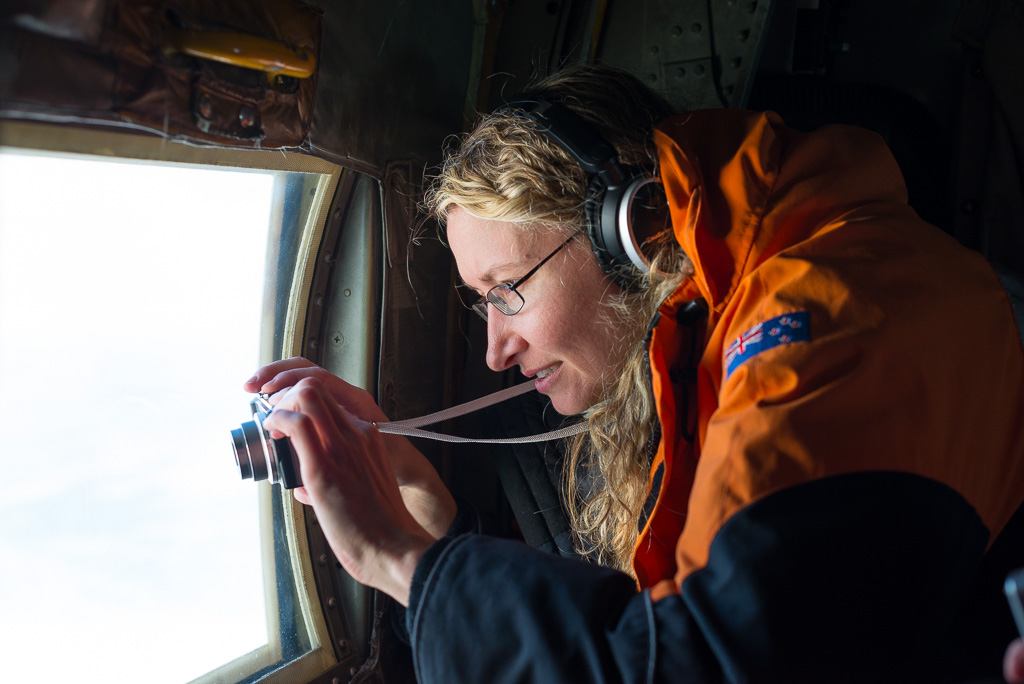 And it was from there that I saw my first view of Antarctica.

It started off with just fragments of ice floating on the sea. Then larger icebergs were coming into view. And finally the continent itself, complete with spectacular glaciers and mountains! 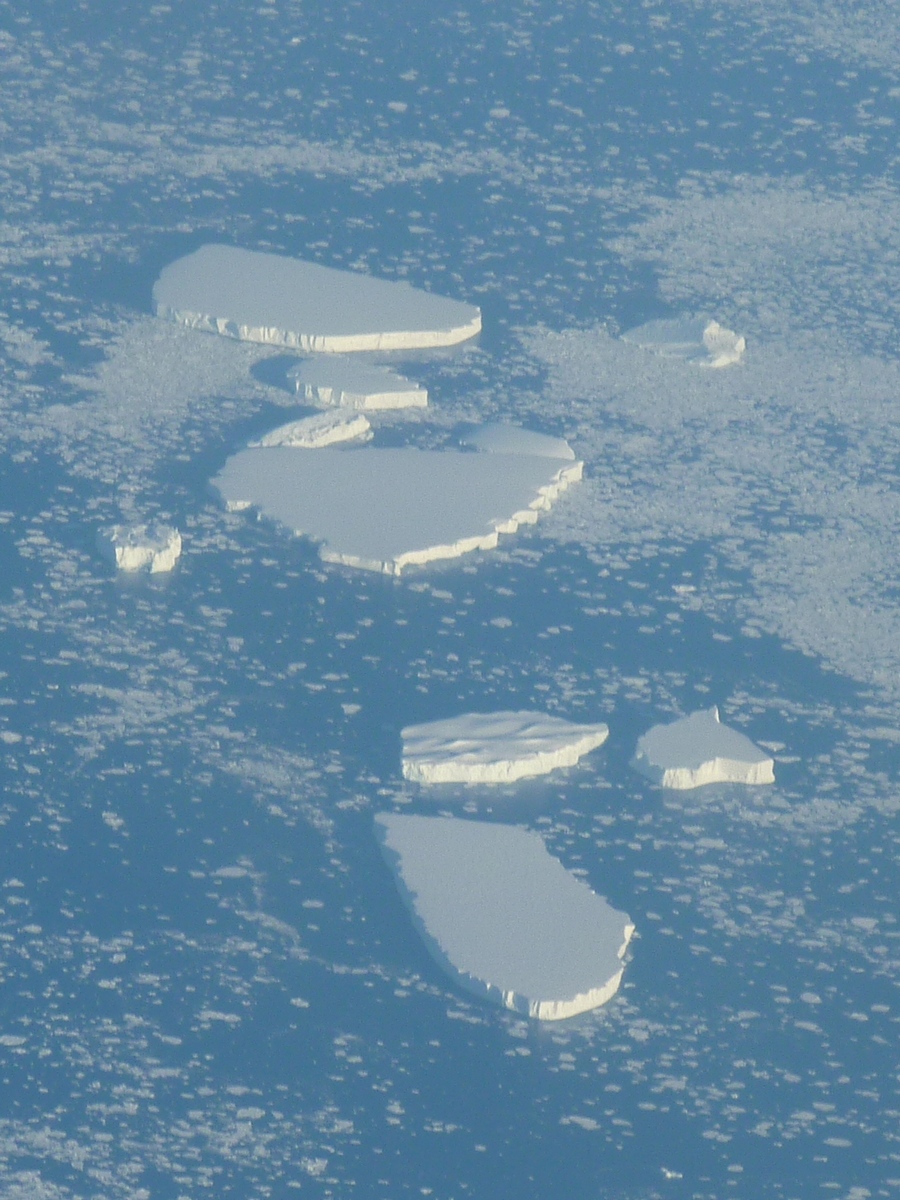 From the plane, the crevasses look like a giant cat had been sharpening its claws on the ice. Those crevasses can be metres to hundreds of metres wide and are caused by the constant movement of the ice. 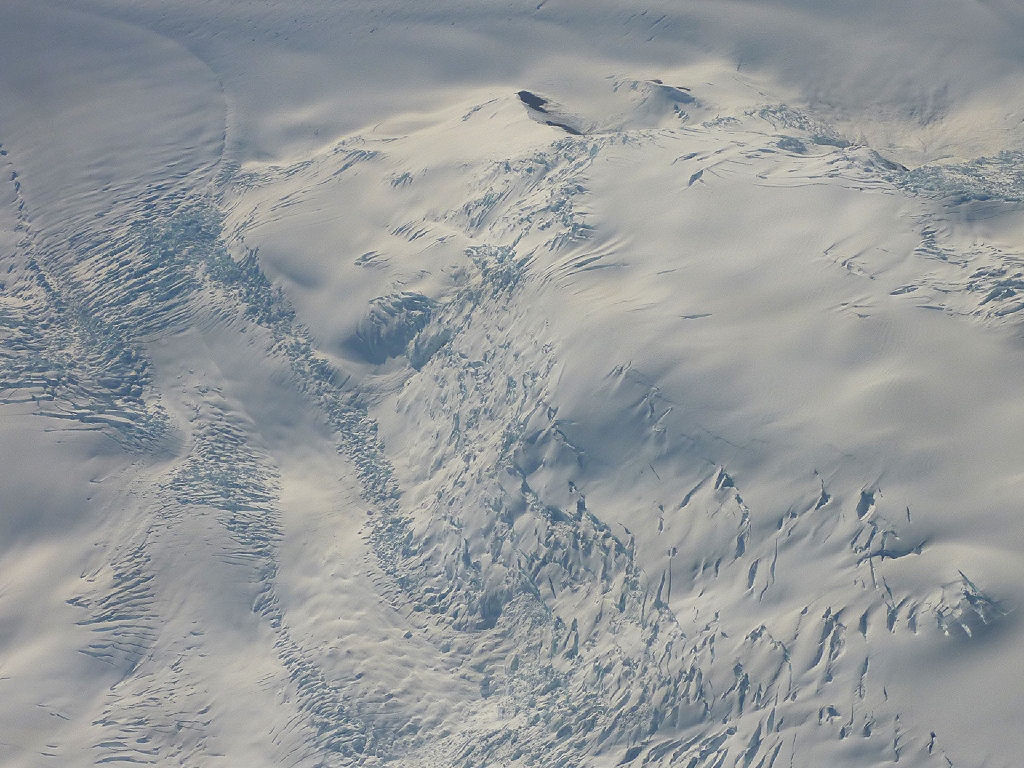 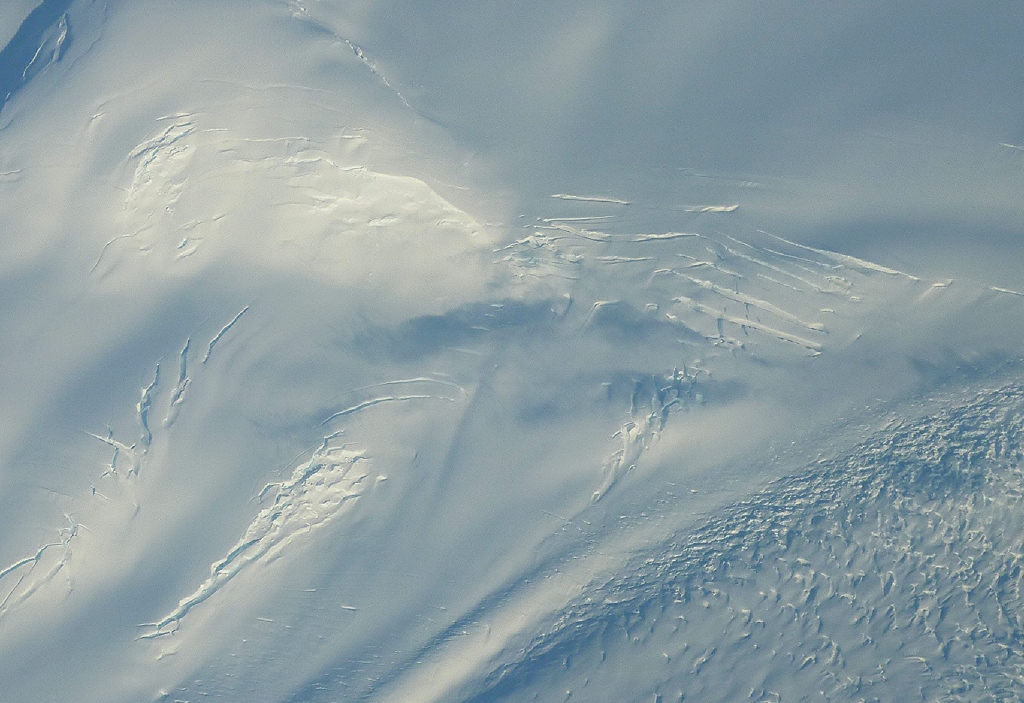 We flew over the very scenic Transantarctic Mountains. This range extends across the continent, dividing East Antarctica from West Antarctica. The highest mountain in the range is Mount Kirkpatrick which is 4,528m above sea level. However, because Antarctica is covered in a massive ice sheet, in some places 3,000m thick, sometimes just the peaks of these mountains are poking up through the ice, giving the illusion that the mountains are much smaller than they are. 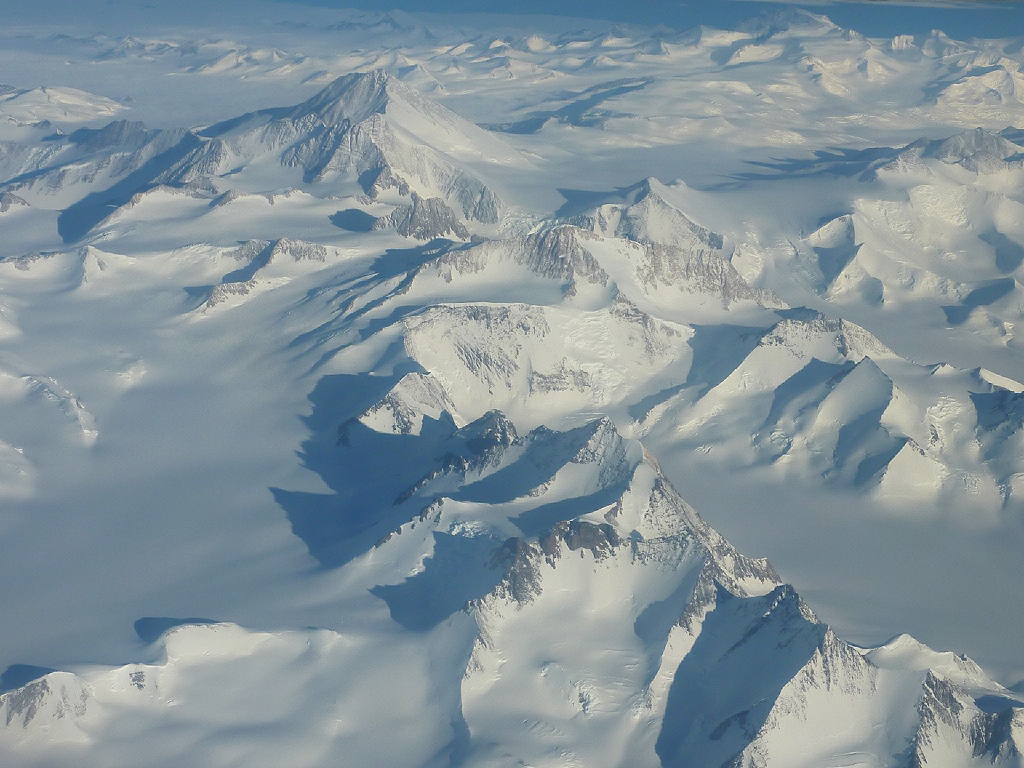 Eight hours after departing Christchurch we touch down on the Pegasus Airfield and step out onto the beautiful white expanse of the Ross Ice Shelf. I can still remember the crisp, sharp bite of the cold that hit us as we stepped off the plane. By Antarctic standards it was a beautiful summer’s day. Low winds and mild temperatures (when I say mild I mean less than zero but more than minus ten degrees celsius).

The strangest thing for me was the sun. It was there, shining brightly in the sky, and yet it was 11:30 at night!! I was quite excited when, half an hour later, I experienced my first midnight sun!

I was in heaven. This trip was going to be awesome!!! 🙂

Information about the Postgraduate Certificate in Antarctic Studies can be found here.